'It's frustrating to start over': Students express thoughts on rezoning in St. Johns Co. 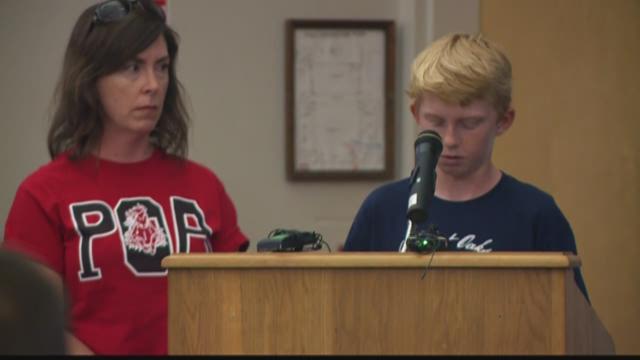 ST. JOHNS COUNTY, Fla. - The fastest-growing school district in Florida has a lot to consider in making its next decision about rezoning. After hearing from parents and students at a town meeting Monday night, the board has that much more to think about.

"Please don't rezone me... I love my school," Sean Regan implored a packed room of about 200 people at First Coast Technical College. The sixth grader at Patriot Oaks Academy has already been uprooted twice since kindergarten.

"It's frustrating to start over, have to start over with the new school environment, new teachers, and having to make new friends again," Sean told First Coast News.

The District has two K-8 schools: one in Aberdeen currently called "LL," the other in Nocatee and dubbed "KK, both set to open in Fall 2018.

Monday's forum, which began with district officials detailing budgets, projections and maps yielded to public comment well into the evening. Many present were students or parents of students at Patriot Oak Academy who could've affected.

Tobias Huning, a father of a kindergartener and two more preschool-age children, said it takes a village to raise a family, and that the strain of instability carries a heavy cost for the kids, the community and society at large.

"We're talking about drug use, which seems to be a resurgent issue in some of these areas," Huning lamented. "You're talking about suicide, depression, burnout, low self-esteem issues, life satisfaction. And we don't want that on anybody's child."

"I work in the criminal justice system, and I can tell you when there's not stability and things change, a lot of times kids run into problems," Lewis contended.

"Some kids don't want to be your friend, so it would be harder to find friends if I move schools again," Madilyn said.

Her friend, Ayden Walsh, who's in seventh grade, echoed her pain.

"It's very hard when you're put in to a new situation, a new environment, and you try to make friends," she said, adding that she's noticed her peers becoming more "judgy" as they approach adolescence.

Superintendent Tim Forson expressed sensitivity about fractured friendships and potentially longer commutes. He told us a possible 'plan B' zoning at school "LL" is in direct response to the very problem of multiple moves for some kids. But he also pointed out that more schools must, and will be built setting the stage for the inevitable disruption of further zone realignments.

"We just have to be careful from a safety standpoint and from just a logistics -- being able to serve children lunch, to be able to provide the resources that are part of a school," Forson said, assuring that care will be taken at every turn, but also acknowledging that it's nigh impossible to please everyone.

At least one parent, Leah Cygan, suggested that development in St. Johns County has been reckless and that the area might eventually become a victim of its own rampant popularity.

"We need to hold the builders accountable in St. Johns County," Cygan said. "They're building the homes, they're bringing the people, but we're not able to sustain growth growth."

Superintendent Forson said a final decision will likely be announced no later than mid-November.