'Dad shot me in the head then my brother': Blind swimmer overcomes family tragedy

Ross Minor is a sophomore at the University of North Florida. He lives his life in complete darkness. 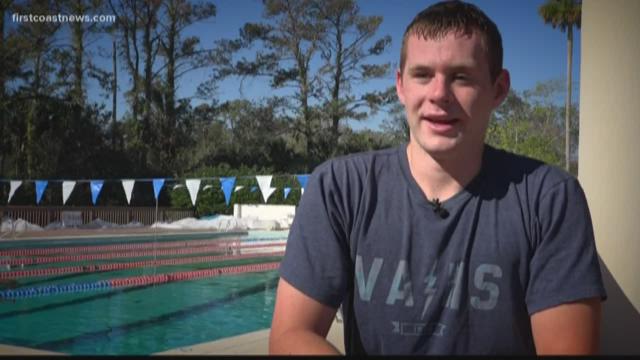 JACKSONVILLE, Fla. -- Ross Minor is a sophomore at the University of North Florida. He lives his life in complete darkness.

"My dad, I guess, couldn't handle not being with my mom and my brother and me. So, when we were sleeping he came in and shot me in the head and then shot my brother Ryan in his sleep and then committed suicide," Minor said.

While he was sleeping in his Charlotte, North Carolina home, his father came in and shot him and his brother. Since that day in 2006, Ross has had to relearn how to do everything.

His parents were getting a divorce. His brother Ryan died. Ross was left with no vision in his right eye, and he had to get a prosthetic left eye. Ross says because it happened to him as a child, it was easier for him to deal with.

"The possibility of me not achieving things wasn't even there because of my childlike optimism. Ever since I was 8, I just held onto it from there," Minor said.

The public schools in Charlotte didn't have the resources he needed to be successful like braille books and support. In 2011, Ross and his mom moved to St. Augustine so he could attend the Florida School for the Deaf and the Blind. It was there he fell in love in the pool.

"My mom swam, my aunt Susie swam, my cousin swam. So, I come from a family of swimmers. In middle school, I was wanting to do a sport, because I had just transferred to FSDB down in St. Augustine. And, my mom suggested swimming," Minor said.

He swam in meets against sighted kids and he won. Now, as a student at UNF, he's still swimming, and he wants to be a paralympic athlete.

"Water is like my comfort zone. Whether it be a pool, a storm, the ocean, or a hurricane. I just love it all. I get to go in the water and just zone out and forget all of my problems and go out and daydream," Minor said.

But how does he swim if he can't see where he's going?

"It's scary! It's scary swimming in the water going straight for the wall and not knowing if you're going to hit it!" he said.

He relies heavily on his coach, who gives him a tap when he's getting closer to the wall or he needs to flip. His out-of-water training is just as important.

"If I'm doing a streamline wrong, he'll have to guide my arms in the proper form. So, he'll make me get out of the water and move my body in the correct form that I should be in. And stuff like that, so, it's a pretty hands-on experience," Minor said.

In a world, where he relies a lot on his hands, and his guide dog Dixie, he continues to live a full life.

"If I want something, I'm going to work towards it no matter what. So, after I went blind, there were a lot of things, that me, my family, my friends, thought I couldn't do, and I've shown them continuously that I can do," Minor said.

This weekend, he's taking his years of training to a U.S. Paralympic swim meet, hoping to qualify for the 2020 Paralympic Games.
The meet is in Charlotte, North Carolina. He said it would be great to do well in the city where he went blind.

Minor also has a YouTube channel where you can learn more about what his life is like as a blind teen trying to navigate through life.