Council chambers were emptied by the Jacksonville Sheriff's Office Wednesday after an upset crowd erupted in chants following a decision by the council president to not allow for longer discussion after individual public comment. 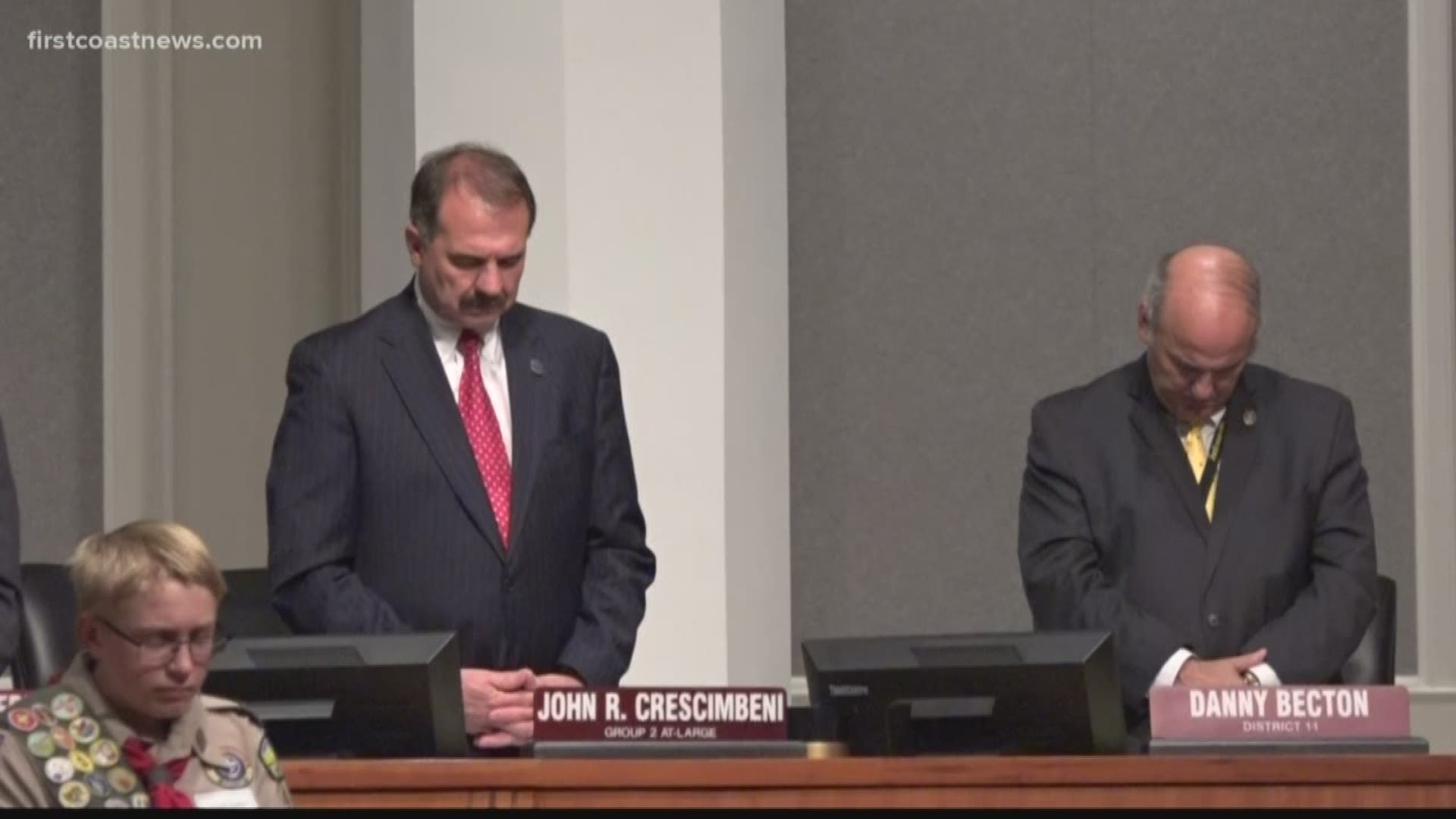 City Council President Aaron Bowman gave orders to the Sergeant at Arms to clear the Council Chambers in Duval County's City Hall Wednesday night. Officers were then asked to escort the crowd outside while council members also left the chamber following a disruption from the crowd.

Most attendees who filled the chamber at the meeting came to discuss the city's crime. Dozens of people filled out public comment cards to have their time at the podium.

City Council started off with a moment of silence, followed by a prayer led by a local pastor in the wake of the deadly shootings in Jacksonville. Public comment followed about 20 minutes later.

City Council rules allow for three minutes for each public comment. Any further questions from the council for clarification or further dialogue must be continued in a separate private room known as the "Green Room", but the discussion there is away from the public and is not on record.

Councilman Garrett Dennis wanted to appeal this rule in the wake of the violence in order to have a more "transparent" public discussion in the chamber.

While Dennis says the private room doesn't violate Sunshine Laws, he says it takes the conversation away from the community.

Dennis only received four votes in his favor to appeal the rule for the night. That's when many people in the crowd voiced their opinions and chanted, "No justice, no peace!"

Ben Frazier, a community leader for the Northside Coalition of Jacksonville, called out, " What about the voice of the people?"

Frazier got up to leave after Dennis' appeal was denied. Then the crowd became louder, expressing their frustration with the council.

That's when Council President Bowman ordered the chamber to be cleared by security.

The crowd then marched from City Hall together to the Landing.

"What you saw tonight, fourteen of my colleagues tried to stifle communication between council members and the public, It’s wrong," said Councilman Dennis, "Yes, I blame the council president absolutely and I blame the thirteen other council members who voted along with him."

About 20 minutes later everyone was allowed back inside, but the room was noticeably more empty.

The public comment portion of the evening was cut short once the meeting resumed since so many people had left. As they called names to come to the podium most people hadn’t returned.

Bowman says their next step in fighting violence is putting more money into local faith leaders and community organizations to help the areas hurting the most across the first coast.

I just spoke w/ security here ... He says City Council Pres. ordered Sgt. at Arms to “clear the chamber” to regain decorum. After emptying chamber, officers told to escort everyone outside. Council members also left for a while. More 2nite on @fcn2go @HeatherFCN @AnthonyReports pic.twitter.com/nPWl6zMRl6

However, Ben Fraser of the Northside Coalition of Jacksonville said the crowd was not cleared -- they walked out.

"We walked out in protest to the attitudes and way they were treating us. JSO did not kick us out," said Fraser to First Coast News.

BREAKING: Council chambers emptied by JSO after crowd erupts in chants, upset with decision by council president to not allow for longer discussion during public comment @FCN2go pic.twitter.com/jb04ZqpfnC

City Hall security has since let attendees back inside the building in an attempt to continue public comment after the disruption.

City Hall security letting people back in now to attempt to continue public comment after disruption. Officer tells me this is NOT common, can’t remember the last time chambers emptied bc crowd was out of hand. Heading back in to see how things go as they resume ... @FCN2go pic.twitter.com/PpaS8cYzk2