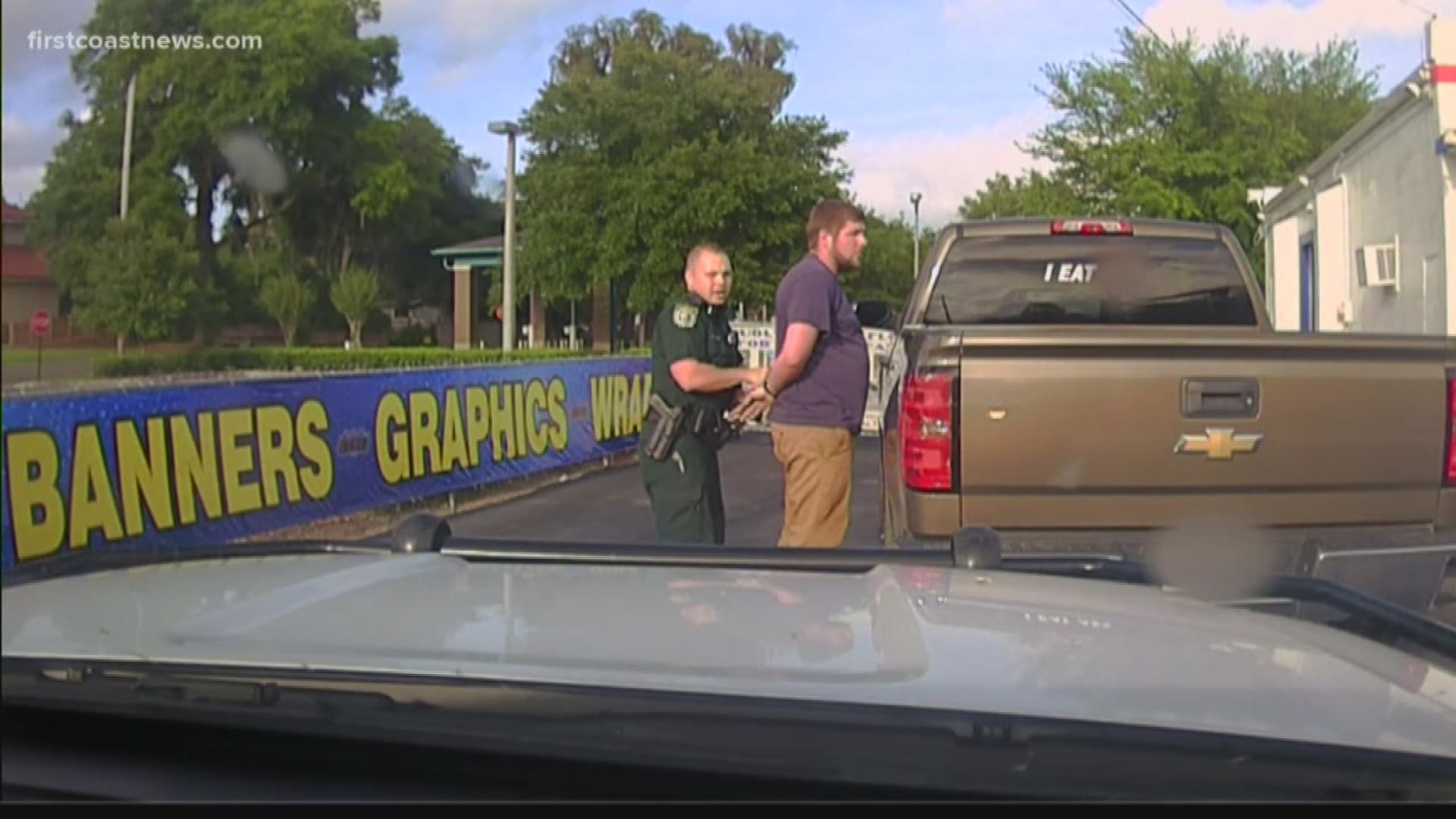 A man who displayed a vulgar sticker on his truck's back window is no longer charged with violating Florida's obscenity law. The State Attorney determined that Dillon Shane Webb, 23, was protected under the First Amendment of the United States Constitution, and would not be convicted by a jury.

Webb was arrested on Sunday by a Columbia County Sheriff's Office deputy and charged with misdemeanor counts of violating the state's obscenity law and resisting an officer without violence.

""I saw the cop at the courthouse and he whipped around to follow me, and I thought to myself, I’m buckled, I’m not speeding, all my lights work, what’s the issue," said Webb. "He said, hey man, don’t you think that sticker is pretty vulgar? And I said, not really."

On Dash Camera video from the Columbia County Sheriff's Office, the deputy is heard asking Webb, "So some ten-year-old little kid sitting in the passenger seat of his mama's vehicle looks over, reads “I eat ***”, and asks his mother what that means, how do you think she’s going to explain that?"

Within a few minutes, Webb was given a notice to appear in court. He would have been able to drive away after that, but it didn't end there, because when he refused to remove one letter from the sticker he was met with handcuffs, a mug shot and an orange jumpsuit.

Andrew Bonderud is now Webb’s attorney on the case.

"I think it’s a significant overreaction from the sheriff’s office, way disproportionate, I don’t think it’s appropriate at all," said Bonderud.

He wants a guarantee that Webb won’t be charged again for keeping the sticker displayed.

"It’s not about us sending a message, it’s about protecting my client’s individual right to not be arrested and also to make sure he’s compensated for the loss he sustained. The sheriff’s office needs to acknowledge that and they need to do it in writing," he said.

Sergeant Murray Smith with the Columbia County Sheriff's Office says it wasn’t the word on the sticker that their deputy deemed illegal.

"It was the obscene phrase depicting what the deputy thought was a sexual act, which is obscene by definition," said Smith. "And if the state attorney is not going to file on something, we aren’t going to go re-arrest somebody."

We asked Webb if he could see how the phrase would be depicted as a sexual obscenity.

"They’re just words," he said, "If that’s how they feel, if they have a perverted mind, that’s on them."

Smith says there job deals with probable cause and in this case they back up their deputy's actions.

"What would a reasonable citizen think? Is the guy eating a donkey or is he doing a sexual act?" said Smith.

In Miller vs. California, the Supreme Court ruled the level of an obscenity may be dependent on a community’s standards and values, not a “national standard”.

Florida Statute states that a sheriff’s office should “vigorously enforce” the law regarding obscenities.

Webb says he comes from a military family and since veterans fought for his first amendment right, he’s going to keep the sticker on his truck.

The deputy who arrested him also happens to be a veteran.

"We evaluated it under the case law, we applied the Miller vs. California test, you have to look at in the community standard," said Durrett. "For every individual you encounter, and believe you me, I’ve heard it from everyone, there is clearly a divided opinion."

He says, per jury instructions 24.5, it’s their determination that they cannot establish that the statement satisfies that standard.

"How that speaks to how we’ve evolved or changed as a society, when we look at it that way and are tasked with proving something beyond a reasonable doubt, we can’t do that here, but certainly I hope it doesn’t serve as an invitation for the furthering of sexual deviancy, hopefully it doesn’t go that way," he said. "We all need to be mindful of the things we say and do and how they impact those around us."

He says they declined to pursue formal charges but it will still be on Webb's record for now.

"It’s hard because it is based upon a community standard. People will always try to take it a step farther and maybe one day we will get to the point where nothing offends anyone anymore but we aren’t there yet."

The Bonderud Law Firm of Jacksonville released the following statement on its Facebook page.

"Now we transition from defense to offense. The First Amendment was our defense. What is Sheriff Hunter's defense? We will find out!"