The Coast Guard received word from Glynn County 911 at about 2 a.m. Sunday that the ship had capsized in St. Simons Sound. 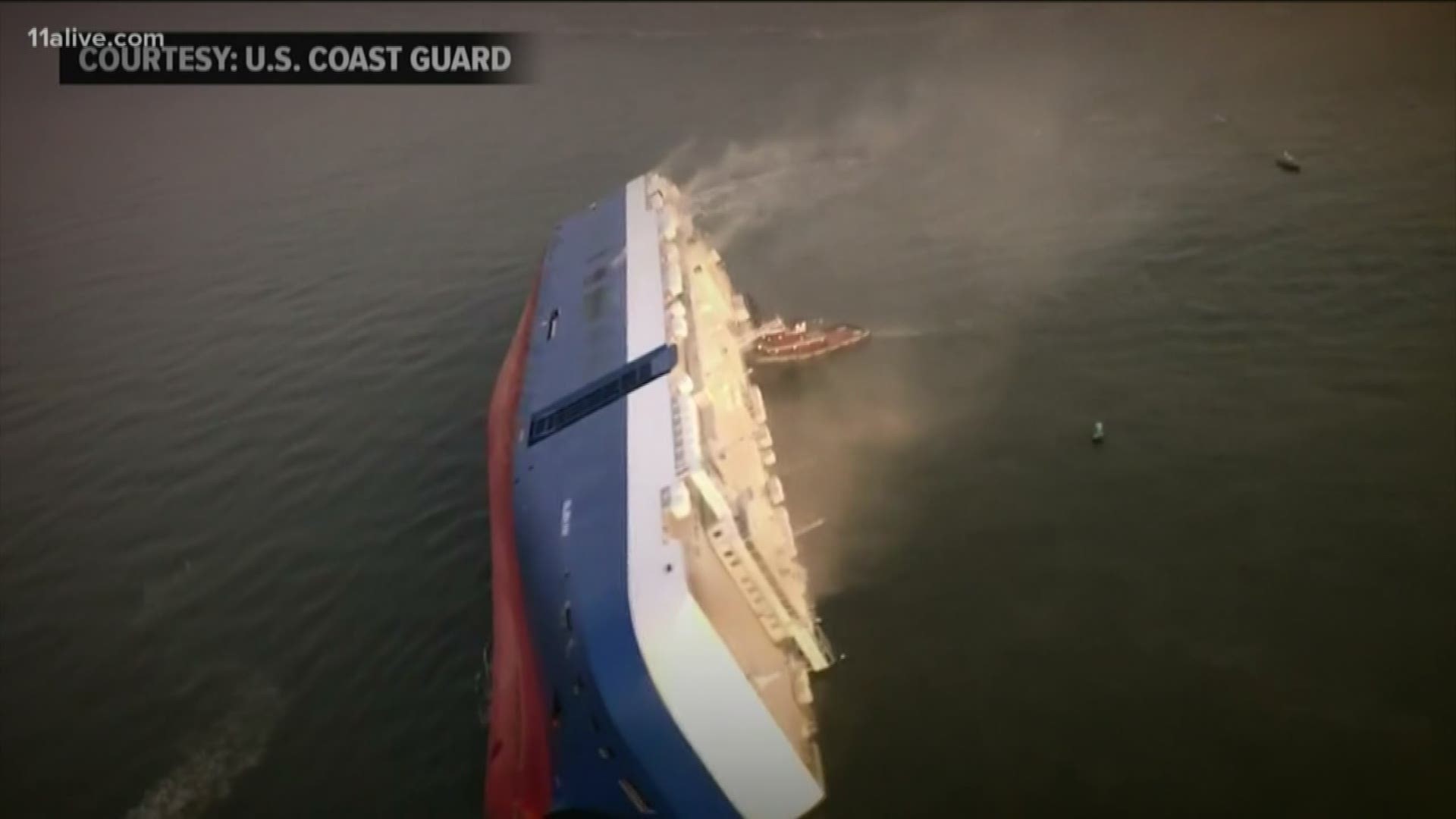 BRUNSWICK, Ga. — The U.S. Coast Guard says search operations are underway for four missing crew members of a disabled cargo ship which had a fire onboard near Brunswick, Georgia. Monday morning, the coast guard reported that noises were heard on the ship. Click here for the latest update.

According to the Coast Guard, 20 people have been safely removed from the M/V Golden Ray, a 656-foot vehicle carrier which is listing heavily in St. Simons Sound.

"As smoke and flames began to appear, our crews, along with the Glynn County Heavy Rescue Team assessed that the situation was too risky to go inside the vessel to attempt to rescue the four individuals who remain missing at this time," said Cmdr. John Reed at a media briefing Sunday afternoon.

The Golden Ray's crew complement is 24 members - 23 crew and one pilot. As of this point, there have been no reports of injuries.

The Coast Guard said Sunday afternoon that smoke had been coming from the ship's starboard side.

"They appear to have been coming from the area of the cargo, and it was black smoke," Reed said. "Since then, the flames have gone out and the black smoke has ceased. But we have been unable to determine, without going specifically inside, whether the fire has been extinguished."

The vessel's master and chief engineer are assisting authorities, and salvage teams are developing plans to stabilize the vessel and continue rescue efforts.

According to MarineTraffic.com, the ship is a Vehicle Carrier that was on its way from the Port of Brunswick to the Port of Baltimore. The vessel is listed as a 200-meter long, 36-meter wide vehicle carrier from the Marshall Islands.

At about 2 a.m. Sunday, watchstanders from the Coast Guard's Charleston sector received word from Glynn County 911 dispatchers that the Golden Ray had capsized in St. Simons Sound.

Multiple Coast Guard assets were dispatched at that point.

The Port of Brunswick Captain has established a safety cordon in St. Simons Sound around the Golden Ray. Vessels not directly involved in the operation are not allowed within a half-mile of the Golden Ray, which is laid over on its side.

In addition, the Georgia Department of Natural Resources, Moran Towing, SeaTow, Brunswick Bar Pilots Association and the Glynn County Fire Department are assisting in the operation.

Glynn County officials told 11Alive News Sunday morning that their first responders were assisting where possible, but the ultimate responsibility and lead agency coordinating efforts on the rescue effort is the U.S. Coast Guard.

The cause of the incident remains under investigation.

Delta flight turns around after trying to fly into Bahamas, despite Hurricane Dorian's fury