A report said an unknown malfunction occurred while the plane was in flight, and the aircraft lost control. 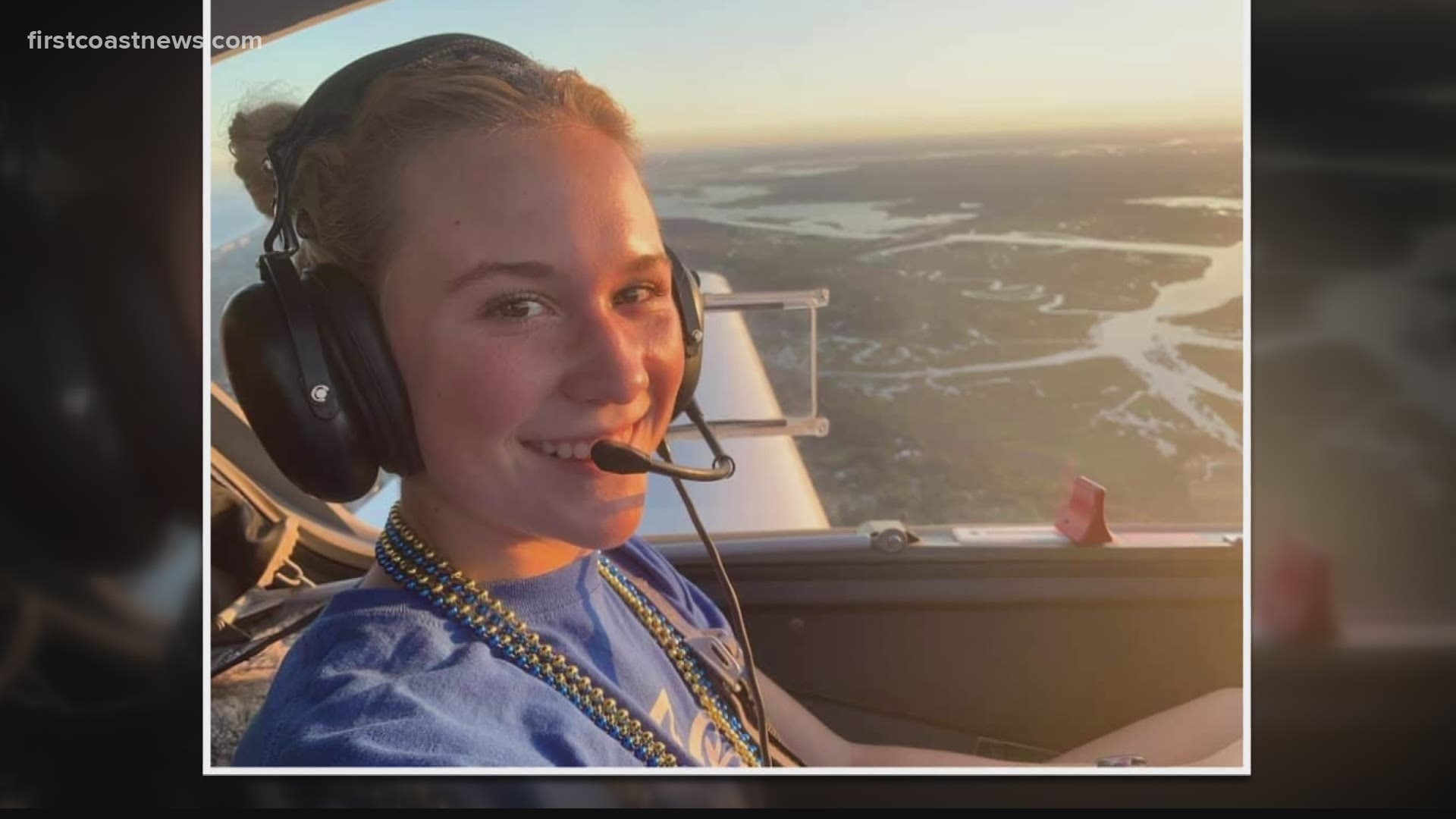 NASSAU COUNTY, Fla. — Two bodies have been recovered from the St. Mary’s River after a plane crash Friday morning, according to the Florida Highway Patrol.

A single-engine Cessna 150 crashed into the St. Marys River near Nassau County around 11:55 a.m., according to the Federal Aviation Administration.

FHP confirmed that the two people who were on board during the crash were an 18-year-old female student and a 66-year-old male pilot. Initial reports revealed they were up for a flying lesson, Sgt. Dylan Bryan told First Coast News.

The 66-year-old's wife identified him as David Cuttino. It was his last day working at A-Cent Aviation. She wrote on Facebook, "There was nothing he wouldn’t do for nearly everyone he met, especially me and our family, 2 & 4 legged. He loved flying and teaching others to fly. He loved everyone and everything and had a heart of pure gold. David was a man of God and lived his life that way."

A family friend identified the 18-year-old as Alexis George. “She was so excited about her future and loved to fly. She was a light," the family friend said. “She was intentional about showing kindness to others.”

George just graduated from Fernandina Beach High School on June 7 and had a full scholarship to Embry-Riddle Aeronautical University. She planned on pursuing a future in aviation.

According to Director of Career and Adult Education for Nassau County Schools, Brent Lemond, George finished the school system's aerospace technology program in the spring of 2020, her junior year. She earned her private pilot ground school certification while she was in the program.

Her instructor said she was among the best students since the program started.

According to FHP's report, both victims were from Fernandina Beach. The report said an unknown malfunction occurred while the plane was in flight, and the aircraft lost control. The possible reason for the loss of control is still under investigation. The report said the plane sank quickly.

Witnesses said the plane went down quickly as well.

People called 911 mid-morning to report a small aircraft that appeared to be in trouble and going into the St. Marys River, Camden County Sheriff's Office Capt. Larry Bruce said. The fixed-wing aircraft crashed into a marshy area of the river.

"The plane was about to crash and I was like 'call 911. Call 911,'" Jennifer Campbell, who witnessed the crash, said.

Campbell and her friend, Caroline Schuepbach, were standing on the dock near their boat when they heard the plane go down.

"It was really just kind of circling around and I kept thinking, 'what is that plane doing,' and I thought it was just going to pick back up, but it just went straight down," Campbell said.

When the plane crashed, Campbell said they called 911 and hopped in their boat to try to help. In the two to three minutes, it took them to get to the boat, they said, the plane was already submerged.

"I kept watching it and I thought, 'what is this plane doing,' and I kept thinking, 'ok, it will pull up. It will pull up,' and then I was like, 'oh my gosh the plane is about to crash,' and they turned around and that’s when it went straight in," Campbell said.

They said they found a binder with the pilot's emergency information and some other belongings among the debris, which they gave to law enforcement.

"There was a headset that was destroyed it was hard to see," Schuepbach said.

Both Schuepbach and Campbell said they're thinking of the families of both victims.

"It was really hard, especially coming back and seeing the family here. I feel really bad for them and I’m just sorry for them," Campbell said.

"I think that’s when it set in. I think seeing her [the victim's wife], because you’re in shock anyway, and then knowing that there was a life lost, two lives apparently, that's really hard," Schuepbach said.

The NTSB and FAA also responded and are conducting their own investigations.

A dive team was requested for recovery efforts. The FAA will release the tail number of the aircraft after investigators verify it at the accident site.

FHP will be in charge of the investigation as well as providing any additional information as the recovery process continues, Bruce said.

We are deeply stunned and saddened by yesterday’s tragic event. A-Cent Aviation is a family, and we are devastated by this terrible event. Our hearts go out to the families of the flight instructor and student.

We want the families of the instructor and student to know that we are committed to finding out what happened, and will be here for them during this extremely difficult time.

We are cooperating fully with the local authorities, the Federal Aviation Administration, and the National Transportation and Safety Board, as we want to get to the root cause of this terrible event.

Again, our thoughts and prayers go out to the families of the flight instructor and student pilot for the loss to their families and to our flight school family.

BREAKING: @FHPJacksonville confirms two victims were a student and pilot from Nassau County