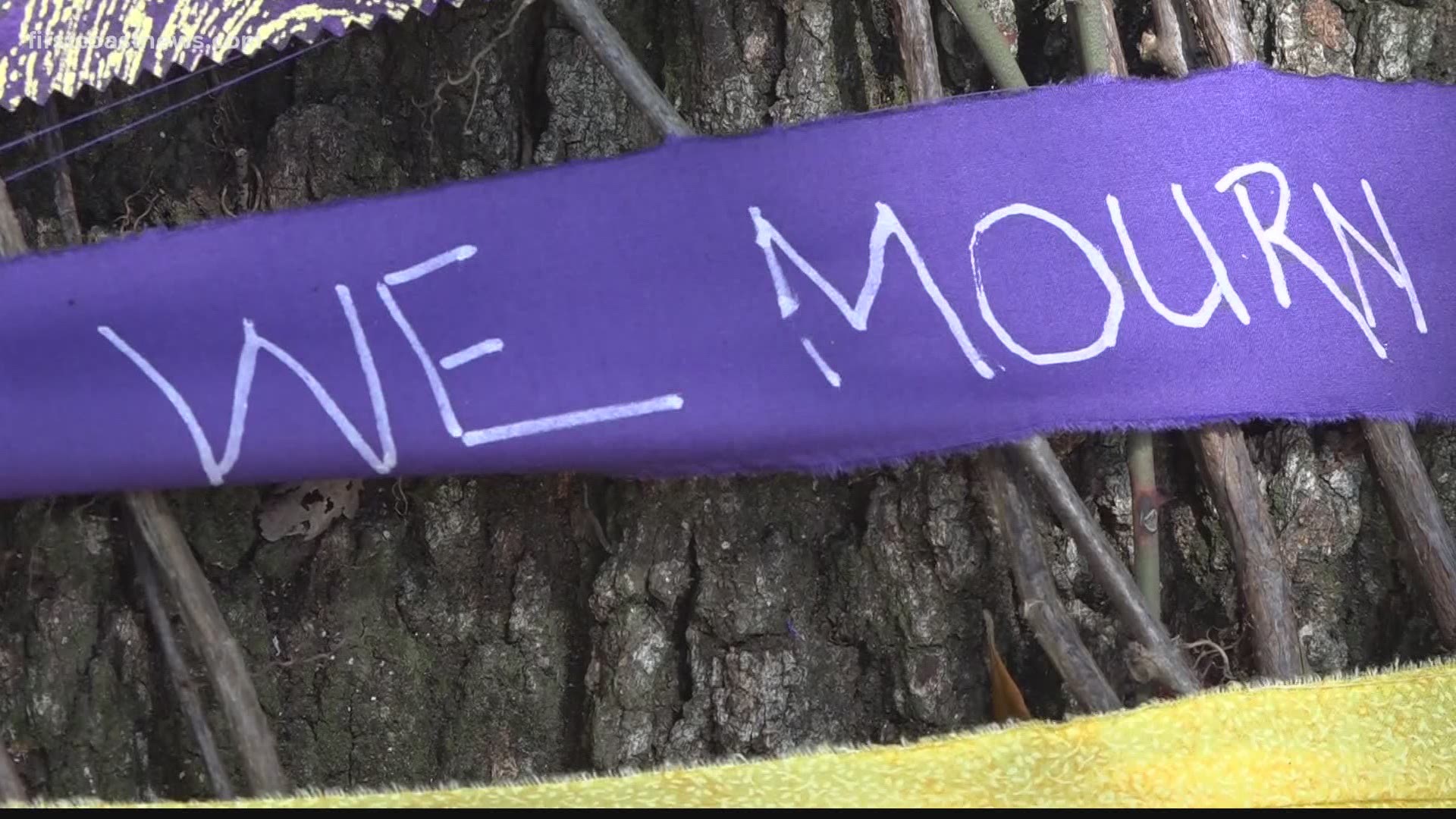 JACKSONVILLE, Fla — While most trees are losing their foliage for the winter, a live oak in Riverside is blooming with messages of hope, grief and love.

The Community Tree is in the front yard of the Yellow House art gallery at 577 King St. in Jacksonville. For the next few months, people are invited to stop by, jot a message on one of the 3-inch-by-4-foot ribbons and hang it in the tree.

The idea for the project came from cultures across the world, said Hope McMath, Yellow House director. She said Scotland has a tradition of "wishing trees," Tibetans have prayer flags and people in Iraq, China and Japan have similar ways of sharing their hopes, pains and dreams.

The way it works is simple. Just stop by the Yellow House during daylight hours, write your message on one of the pieces of fabric you'll find there and tie it to the tree. You can even tie it to someone else's message if that works for you. There will be fabric markers for writing on purple ribbons for loss and yellow ones for messages of hope. There is no charge.

"It’s just going to organically grow and change with every message that’s added to it," McMath said. "This is a communal project. At the point we put the materials out, it’s no longer ours, it’s the community’s project."

Yellow House has been closed since March because of the pandemic, but McMath said the tree project is a way for the organization to help the community without putting anyone at risk.

"We were thinking about the role we play in providing a space for healing and activism and art," she said. "How can we do this for this end-of-the-year period when we’re physically closed?"

The answer was right there in the yard the whole time, she said, in the form of a live oak tree estimated to be at least 175 years old. She said she hopes to see it covered with messages and wishes and the names of lost loved ones. Early messages include the number of U.S. COVID-19 deaths, a note about gun violence in Jacksonville and a message from someone looking forward to the day they can once again hug family members.

The project is not tied to the holiday season — it opened in time for the winter solstice and the ribbons will hang until around the time of the spring equinox in March. It's also not necessarily about COVID-19, although McMath said she expects to see plenty of pandemic-related messages on the tree.

"COVID is obviously a huge part of it, as we are reflecting on all the losses it's brought — the loss of jobs, the loss of 300,000 human beings, the loss of being able to gather with people," she said.

Racial injustice, gun violence and political divisiveness are seemingly at all-time highs, and McMath said she hopes the Community Tree can provide a bit of healing.

"It feels like there’s no space for collective grief right now," she said. "Until we reckon with some of these things, we're not going to be able to move on."

They'll regularly check the messages to make sure they don't turn negative, McMath said. "If somebody hangs something that’s disparaging of other people, we’re going to take that down."

McMath also commissioned an original poem from Yvette Angelique Hyater Adams. Her "Reckoning Line Between Shadow and Shine" has been printed on a banner that will hang near the Community Tree throughout the project.