The downtown park is located on the birth site of James Weldon Johnson and John Rosamond Johnson, authors of the Black National Anthem. 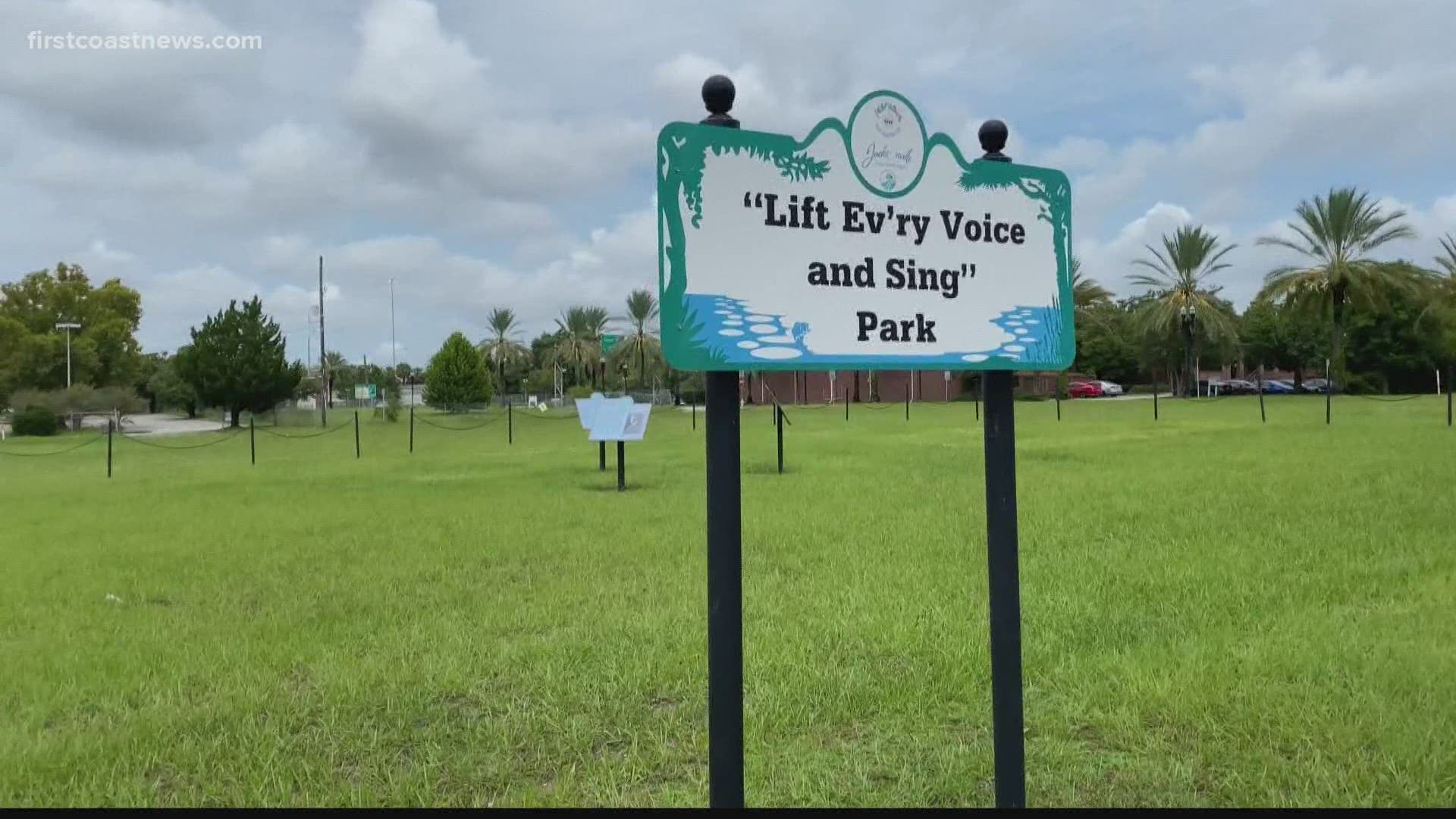 JACKSONVILLE, Fla — Today it is a mostly vacant lot. But almost 150 years ago, it was where Jacksonville natives James Weldon Johnson and John Rosamond Johnson were born. Today, the city will unveil the design of “Lift Ev’ry Voice and Sing Park, named for the song the brothers wrote and composed in that home.

Now known as the Black National Anthem, “Lift Ev’ry Voice and Sing” is both a hymn and a rallying cry for justice and equality – memorably performed last year by Beyoncé.

It was the theme of “Lift,” a groundbreaking exhibit at the Cummer Museum in 2016, and is frequently performed and recited at churches and schools.

According to a news release from the City of Jacksonville, the design of on the site at 120 Lee Street is based on prior community conversations and conceptualized by Walter Hood, a landscape architect who received a MacArthur Foundation “genius grant” last year.

The city unveils the design at 11 a.m. Thursday at the Jessie Ball DuPont Center at 40 E. Adams St.

The full city news release is below:

Today, the City of Jacksonville is pleased to reveal design plans for the highly anticipated Lift Ev’ry Voice and Sing Park in the historic LaVilla neighborhood. The park is located at 120 Lee Street, the birth site of Jacksonville natives James Weldon Johnson and John Rosamond Johnson. The Johnson brothers wrote and composed what is now known as the Black National Anthem, “Lift Ev’ry Voice and Sing,” at their home in LaVilla between 1900 and 1905. As one of the first cultural landmarks to be developed as part of the greater LaVilla redevelopment strategy, Lift Ev’ry Voice and Sing Park was carefully designed to honor the contributions of some of Jacksonville’s most renowned citizens, as well as encourage the next generation of artists and thought leaders to make their marks on this historic space.

“The legacy of the Johnson brothers and of Lift Ev’ry Voice and Sing is an important part of our city’s history, and one that we are deeply committed to honoring,” said Mayor Lenny Curry. “We are excited to move forward with design plans for Lift Ev’ry Voice and Sing Park as the next step in bringing to life an inclusive community space and a more vibrant LaVilla for generations to come.”

The vision for Lift Ev’ry Voice and Sing park comes after years of planning, input meetings, and discussions with community stakeholders about how to best revitalize the city’s historic LaVilla community, a once bustling and vibrant neighborhood with arts, culture, and entrepreneurship. The neighborhood was often referred to as the “Harlem of the South.”

The park design was based on past community conversations and feedback, and conceptualized by Walter Hood, the renowned landscape architect and 2019 recipient of the MacArthur Foundation “genius grant.” His process included several trips to Jacksonville and primary-source research into LaVilla’s rich history.

Lift Ev’ry Voice and Sing Park is just one component of a more expansive LaVilla Heritage Trail first proposed as part of a 2019 joint Downtown Investment Authority (DIA) and Jacksonville Transportation Authority (JTA) study to redevelop the LaVilla neighborhood. While conversations around a larger Heritage Trail and redevelopment strategy are ongoing, Lift Ev’ry Voice and Sing Park will join two other major initiatives in the neighborhood: the newly opened Jacksonville Regional Transportation Center housing the city’s primary bus terminal, a revamped Skyway station and new administration offices for JTA; and several new affordable housing projects, including The Vestcor Companies’ Lofts at LaVilla and Lofts at Monroe, which are bringing multifamily residential space back to the area.

“This park will serve as a reminder of how critical LaVilla was for the economic and cultural expansion of Jacksonville,” said Councilman Reggie Gaffney. “I am excited to see the momentum around Lift Ev’ry Voice and Sing Park as we continue working to revitalize LaVilla. This project is possible because of the hard work and collaboration of many individuals and organizations who believe that to make Jacksonville better tomorrow, we must always remember what happened yesterday. By blending the past, present and future we celebrate our city’s unique African American heritage.”

An important element of any inclusive community space is active, community-sourced programming. In the coming months, the City of Jacksonville will be working with local partners to facilitate community conversations surrounding the types of programs and events our residents would like to see at Lift Ev’ry Voice and Sing park.

RELATED: 'Lift Every Voice and Sing': The history of the Black national anthem