"I’ve seen markers, maybe spray paint graffiti, but never someone going through so much trouble like to intentionally destroy something." 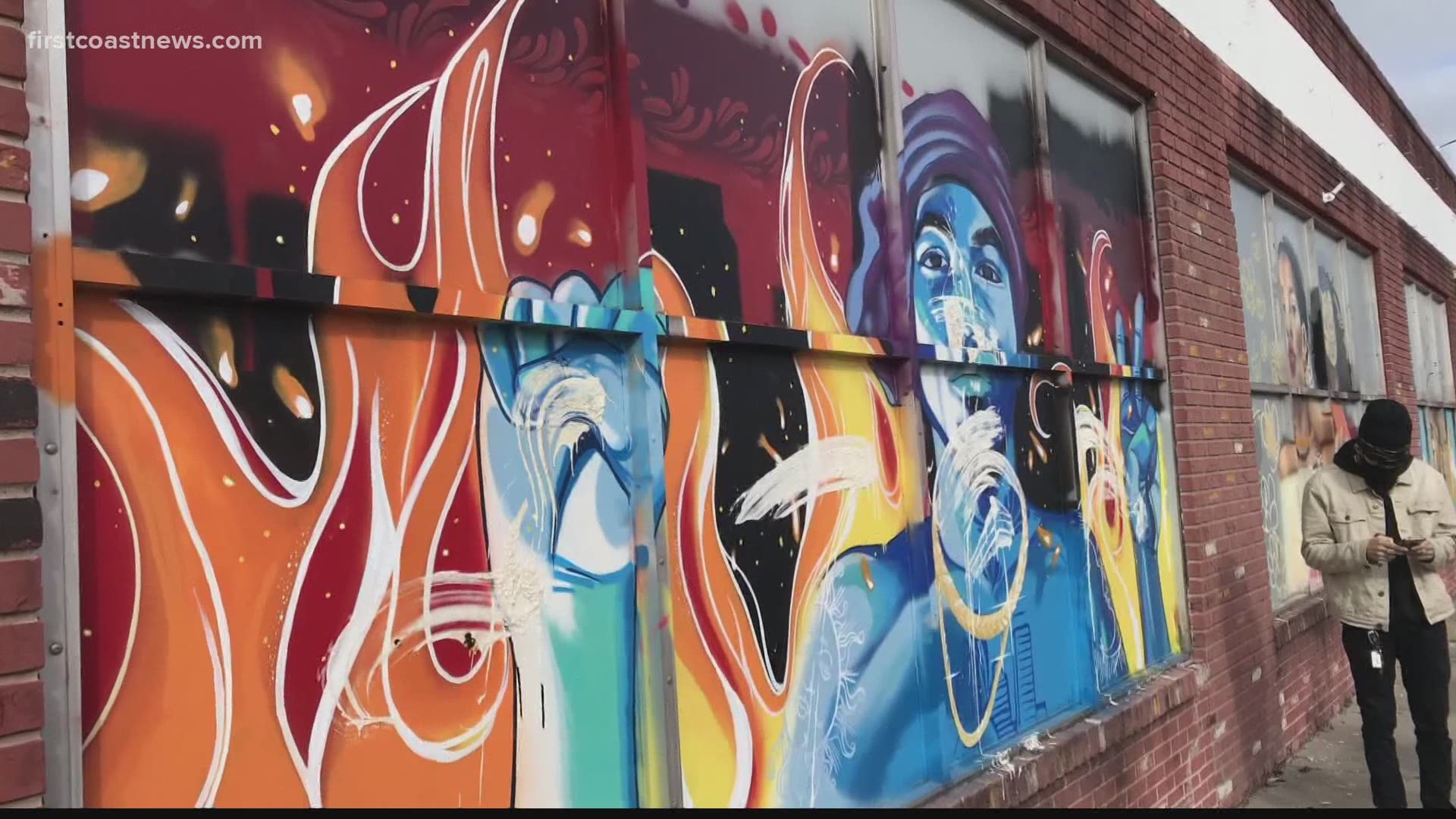 JACKSONVILLE, Fla. — A Black art collaboration was partially destroyed Thursday when someone used paint stripper to deface the mural.

Three local artists were working on murals representing people of color in the Lakeshore neighborhood off of Blanding Boulevard near San Juan Avenue.

Despite the damage, the artists are motivated to paint bigger and better murals in their place

The three artists spent the morning removing what they believe was some kind of paint stripper and filling in the defaced spots with gold spray paint.

They say while it is disappointing someone would do this, the vandalism sparked a reaction in the local art community. The canvas for these three artist’s creations is exposed.

Chris Clark says it is bizarre for someone to deface a mural like this.

”We have murals all over town," Clark said. I’ve seen markers, maybe spray paint, graffiti but never someone going through so much trouble like to intentionally destroy something."

“It’s kind of bizarre”
Three Jacksonville artists were putting up these murals representing Black people and someone defaced them with paint stripper. They tell me the plan is to build them bigger and better now. Their story tonight @FCN2go pic.twitter.com/4AzDLzDA5x

Each artist's work has a different story behind it.

Maiya Elaine’s mural represents diversity and inclusion in the city.

”I wanted to really be inclusive with the figures that I kept," Elaine said. "To do it in this area meant a lot because a lot of different people live in this area."

Tatiana Kitchen painted a mural of her brother with the downtown Jacksonville skyline in the background.

“I want it to represent justice and peace in Jacksonville and throughout the entire country, especially in the midst of the riots that are going on," Kitchen said. "I have the fire in the background of my painting as a way to represent the energy that I feel like has carried on throughout the year of just fighting for justice."

Clark, who posted the defaced murals on his Instagram page, said he wanted to create a positive image with a bright background.

While frustrated they will have to start over, Elaine said she is grateful for support from the local art community.

“It helps us move forward and know that we can create positive change through the work that we do," Elaine explained. "We can have some sense of the importance of sharing this message."

They say their goal is to have people of color represented through art, their way to support the message that black lives matter.

Kitchen says their image is worth representing for their generation and the next.

“To me, it’s important, not even just for black faces, but for people of color in general," Kitchen said. "It’s important for us to see our faces throughout our cities to let us know we’re a part of this community as well."

The artists are raising the funds to repair the damage and complete the second half of this project.

They say they filed a police report with the Jacksonville Sheriff’s Office.

You can find a link to their GoFundMe page here.