A grief expert explains the "ambiguous loss' that may be experienced by those closest to missing firefighters Brian McCluney and Justin Walker. 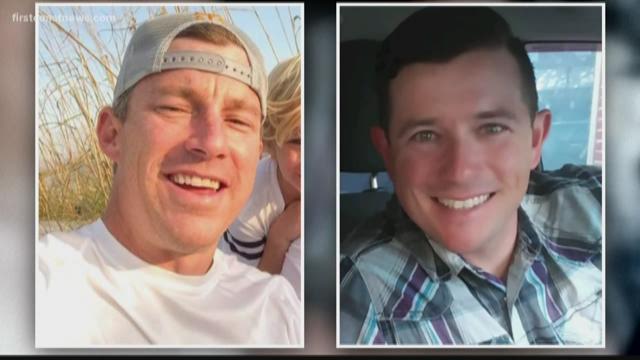 “I believe in a God of miracles,” said Stephanie McCluney, Brian McCluney wife, at a press conference on Friday.

But McCluney’s family is also showing signs that their faith is tempered by resignation that their loved one and his close friend, Justin Walker of Virginia, might not have survived. Both firefighters have been missing since a fishing trip on Friday, Aug. 16.

“Brian was a generous and kind man," his mother told the media, speaking conspicuously in the past tense. "He had charisma and he drew people in.”

"That happens when you have lost something and yet there’s an inconclusive nature to it, like, for example, our missing firefighters,” Weinstein explained to First Coast News on Monday, just hours after the family’s media conference.

That ambiguity is affecting McCluney’s co-workers at the Jacksonville Fire Rescue Department as well.

“One of the questions that was asked in a large group,” said Jacksonville Firefighters Association president Randy Wyse, “was ‘How do you have a funeral?’”

Weinstein said ambiguous loss can come in many forms and therefore afflicts many people.

“That might be a relationship loss, it might be a loved one’s terminal illness, like dementia or cancer,” Weinstein, who holds a Master’s degree in counseling and counseling education, explained. “It may be that a loved one is incarcerated.”

In other words, the loss can be uncertain, or it can be that someone is still alive, but inaccessible because of a physical condition or circumstance.

For Terri Allen of Jacksonville, it’s the latter: her son was found not guilty by reason of insanity in the murder of a man in 2016. He is required to live at a mental health facility hundreds of miles away from Jacksonville.

“He is my son, regardless of what has happened,” Allen said. “But he is my son with a mental illness.”

Her tragedy is compounded because the victim was also someone close to her, conflicted because while she agonizes about what happened, she still aches to support her son.

“When we talk and if he’s sad, if he cries, I’m not able to be there to be a comfort to him, to touch him, to hold him, and to say ‘It’s going to be alright,’” Allen said.

Allen, speaking publicly about her ordeal for the first time, said the last three years has been a journey. She also said she wants to make a difference by reaching lawmakers in Tallahassee.

“I’m just so amazed that [with] all that’s going on in our world, in our country – and especially here in Florida – that we’re so low on the totem pole as far as funding for mental health," she said. "It’s a tragedy in itself because so many people need help.”

Weinstein admonished those who might critique the outward appearances of those close to the missing firefighters, pointing out that, the more sudden the loss, the more delayed the reaction often is.\

“It can look, to other people, like someone in the immediate aftermath of grief is handling it really well,” Weinstein said, “and I would caution people about making that conclusion because what it really may be is just simply them being unable to assimilate the enormity of the circumstance.”

She also indicated that in a society whose attention span is often brief, even in cases of either great publicity or support, the grief usually outlives the attention.

“Everybody’s rallying around us,” she said, in the hypothetical that we are the afflicted, “but very quickly those people have to go back to their lives.

“And they don’t mean to hurt us, but it can be a very isolating experience and can feel like abandonment when other people trickle away and go back to their lives, and we’re left still grieving,” she said.

If you or someone you know is grieving and needs support, you can locally reach out to the Jacksonville Center for Grief and Loss at 904-562-1390. Also, nationally, the U.S. Department of Health & Human Services offers a helpline through the Substance Abuse and Mental Health Services Association, at 1-800-662-HELP.