Minutes passed before Ahmaud Arbery received medical attention. "His body was reacting and he was trying to gasp for air," according to the first officer on scene. 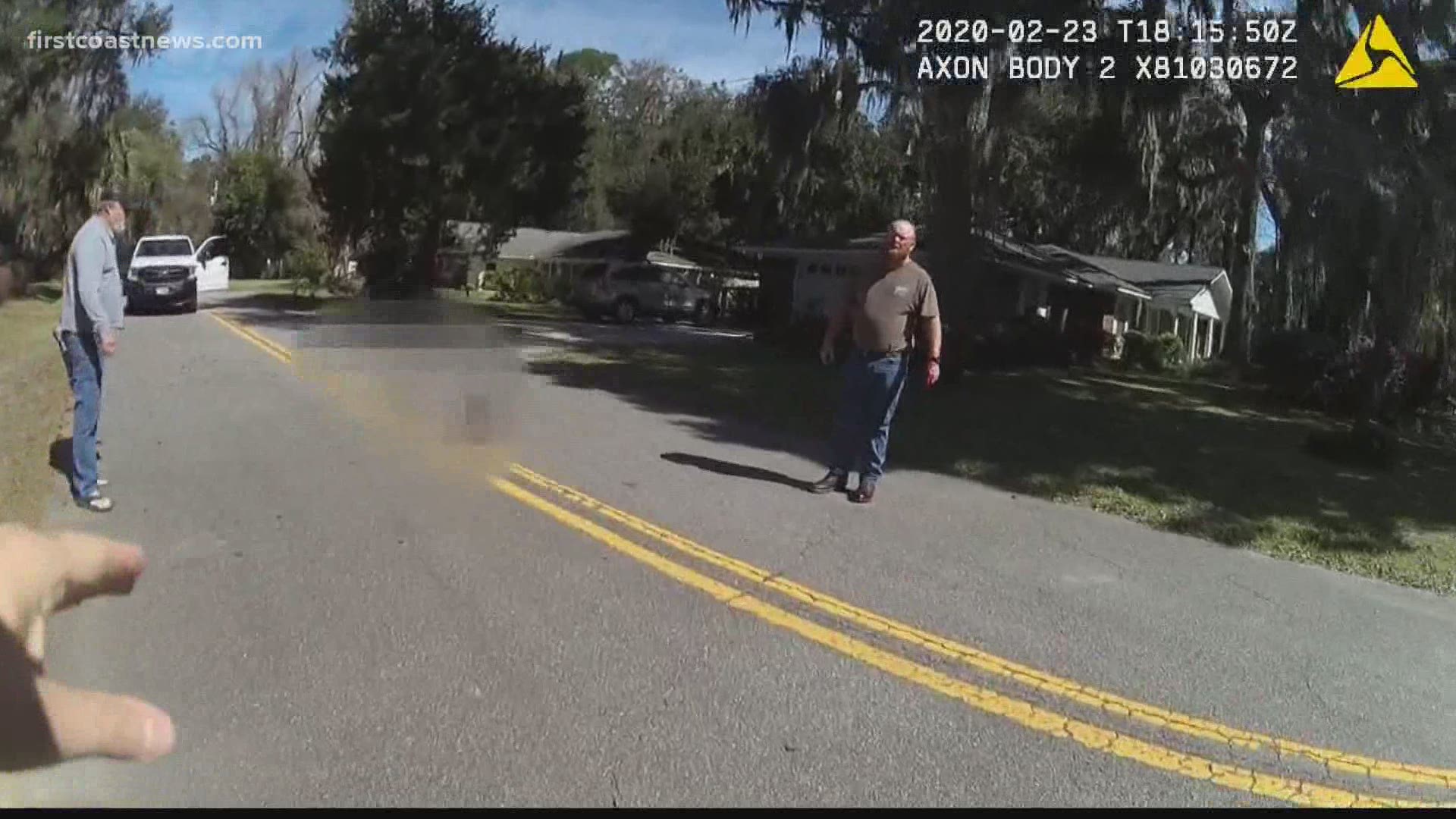 JACKSONVILLE, Fla — Police body camera footage released this week in the Ahmaud Arbery case shows the 25-year-old was still breathing and moving when officers arrived on the scene. Officers did not check for vital signs or render aid for nearly three minutes, though the first officer arrived within seconds of the fatal shooting.

There is no indication Arbery’s life could have been saved even if he had received immediate medical care, due to the severity of his three gunshot wounds.

Arbery was shot to death last February in Brunswick, Ga. His death gained national attention after a cell phone recording showed Arbery running through the Satilla Shores suburb, pursued by three white men in trucks before being killed. The men say they thought he was burglarizing local homes. His family maintains he was jogging.

The newly released bodycam footage shows the first officer on the scene, Glynn County Police Officer R. Minshew, activating his body worn camera as he steps out of his squad car. Police dispatch reports show he arrived just minutes after the shooting. His first report from the scene was of a black male on the ground “bleeding out.”

His body camera captures Arbery facedown in the middle of Satilla Drive. Greg and Travis McMichael, since charged with murder, stand above him.

Thirteen seconds into the recording, Arbery’s right foot rolls over.

53 seconds in, a large gasp is heard. His lower body appears to lift slightly.

“He had no choice man,” Greg McMichael is telling Minshew.

“Do you know where he got shot at, man?” Minshew asks. “Is he shot on the front side, too?”

Minshew then returns to his squad car, grabs his cell phone and begins taking photos of the scene.

The Glynn County Police Department did not immediately respond to a request for comment.

“Yep I know,” the officer replies. “I’m going to try to do something for him.”

“You got your first aid kit?” he shouts to Minshew. He rolls Arbery over on his back. His torso is soaked in blood. “Damn,” he mutters.

About a minute later, Minshew reports, “I ain't got no first aid kit.”

“I’m just going to keep my hand on him,” the officer says, pressing his gloved hand to Arbery’s chest.

At the 7:54 mark, paramedics arrive. The officer is standing over Arbery’s body.

“Looks like shotgun slug to the center chest. He was on his stomach when I got here. I rolled him over. He stopped breathing a couple minutes ago,” he tells paramedics.

He adds, “I kept pressure on it, but there was nothing I could do.”

Minshew later tells other officers he was on scene within seconds, since he was already responding to a neighborhood disturbance call. "I mean when shots were fired I was right around that freaking bush over there," he says, pointing at a spot a few hundred feet away.

He notes the McMichaels were "still standing there with guns in their hand."