Activist groups demanded changes in the city budget and ask to expand vote by mail. 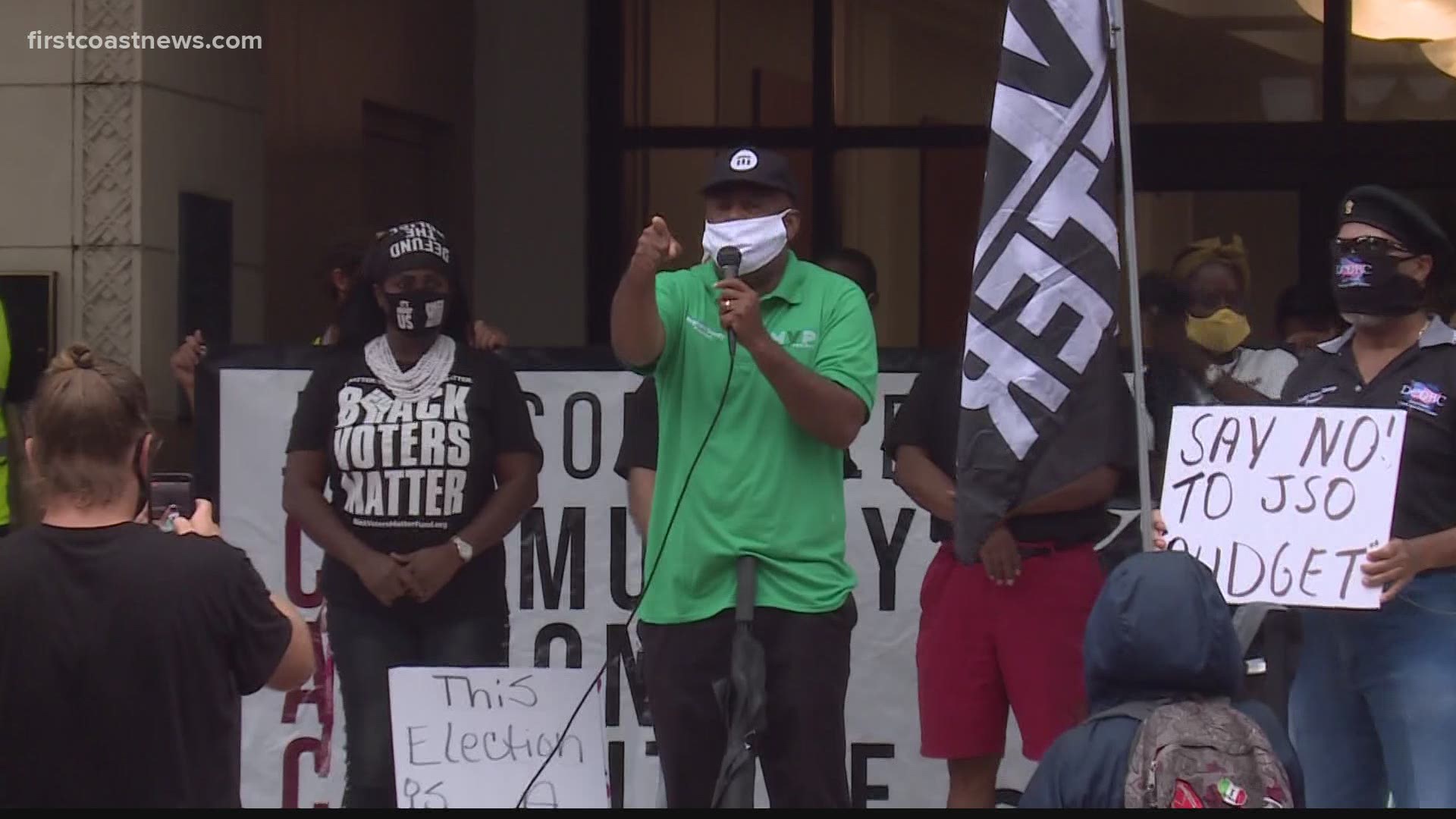 JACKSONVILLE, Fla. — Activist groups took to the streets Saturday in downtown Jacksonville in two separate rallies, both challenging choices of those in office.

"We have the power to protest until you finally make up your mind that you're going to do what the people want and not what you want," a speaker said to the crowd gathered outside City Hall.

It was part of the Jacksonville Community Action Committee's Day of Action. The group is asking the city council to approve what they call "The People's Budget," and reject Mayor Lenny Curry's proposed budget.

“We want them to rework the budget so that it’s distributed more evenly, so that one department doesn’t get 40, 50, however much percent of the budget," Christina Kittle, co-founder of the Jacksonville Community Action Committee, said.

Council tentatively approved the mayor's budget on Sept, 8. The Jacksonville Sheriff's Office gets about 40 percent of the city's spending.

"Investing more and more money in JSO has not been working," Kittle said.

Instead, the Jacksonville Community Action Committee wants money reallocated from JSO's budget into the community for employment opportunities as well as mental and public health resources.

"Try to work with the community and listen to what our needs are, and try to invest in those kinds of needs instead," Kittle said in her message to city council members.

Down the street, activist groups had a list of demands for Supervisor of Elections Mike Hogan. One of those demands included expanding vote by mail by sending out requests for ballots to every registered voter.

"We want everyone to be able to turn out and vote, but we'd also like them to be able to do that safely," Lanelle Phillmon, the president of the League of Women Voters Jacksonville First Coast, said.

"Through no fault of our supervisor of election, people have been made to feel a little insecure or distrustful of our U.S. Postal Service and, again, that’s not his fault, but then, people are concerned if they get their ballot and they drop it a U.S. Postal Service drop box that it’s not going to get to the supervisor of election in time," Phillmon said.

She said that's the main reason, the activist groups are asking for the drive-thru deposit boxes.

According to Chief Elections Officer Robert Phillips, all early voting sites will have drop boxes so voters won't have to go all the way into the site, but due to logistics, not all will be drive-thru.

"There will be drive-thrus set up at several early voting sites and we will advertise that once those are finalized," Phillips said.

Phillips said they've also added several early voting sites, and are working with the Jags to turn Lot J into a vote by mail dropbox site for the last week of early voting.

"When you add all of these things together, we're very accessible. We're doing everything we can," Phillips said.

According to Reginald Gundy, the state director of African-American Ministers in Action, the groups also want early voting sites at Edward Waters College and the University of North Florida. Phillips said they have expanded to 20 early voting sites, and added sites at the Prime Osbourne Center and Florida State Campus at Deerwood.

Phillmon and Gundy said another goal of the rally is voter education.

“We realize now more than ever, and it may be because of the pandemic, people are really paying attention to what’s going on in their community," Phillmon said.

"There’s too much misinformation out there and to his [Hogan] credit, he has agreed that when we meet with him that we can meet with his public relations person and help send that message out for voter education. I want to give him credit for doing that," Gundy said.

Hogan plans to meet with some of the groups this week to talk about voter education.

RELATED: How to vote by mail in Florida for the 2020 general election