Workers at the Jewish Community Alliance said the bird seems happy there and in no hurry to make its way back home. 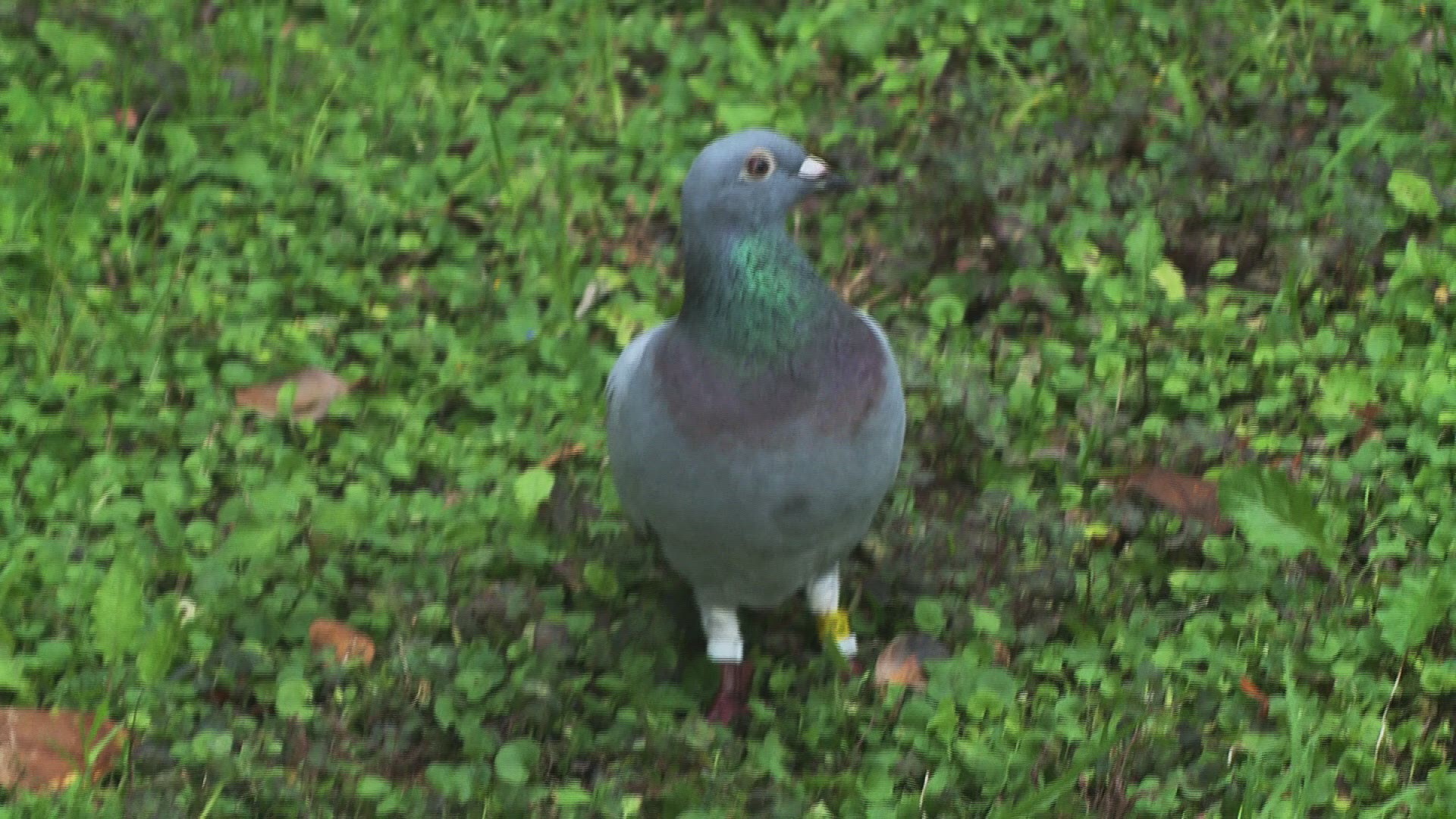 JACKSONVILLE, Fla. — A racing pigeon that went hundreds of miles off course, is making itself at home in the courtyard of the Jewish Community Alliance on San Jose Boulevard.

He just showed up on Sunday.

“It was kind of weird because we never get birds in here,” said Heather Terrill, the J Institute program manager at JCA.

Terrill almost immediately noticed it was not like the wild pigeons most people are familiar with.

“I noticed he had some bands on his little legs,” she said.

Credit: First Coast News
The bands on this pigeon's legs helped workers at the Jewish Community Alliance find its owner.

Those bands, and a Google search, led Terrill to the bird’s owner in Spring Hill, Fla.

“He said that the bird had been in a race on Saturday from Louisville, Ky., and had flown all the way to Jacksonville within that day, so it was 758 miles, and that’s kind of crazy,” Terrill said.

She asked the owner about the pigeon, which was numbered 996.

But Terrill told him she doesn’t think so.

Credit: First Coast News
This racing pigeon ended up at the Jewish Community Alliance after going off course by 700 miles.

Terrill said the owner was “not distraught” the bird had not come back and it isn’t uncommon for racing pigeons not to find their way home.

This pigeon has been a hit with the center’s students. Terrill said they are “thrilled.”

"Our kindergarten class has binoculars and they bring them out here and do like a whole birdwatching thing with him," she said.

Some of the students have named the pigeon Asher. Others call him Birdie. Most of the staff refer to him as Dave, after a former coworker.

Terrill said the pigeon is a bit standoffish.

“He’s curious and he’ll come up to you if you make a chirping noise. He’ll come towards you and he’ll get probably within a foot and then that’s close enough, stay where you’re at and don’t get any closer,” she said.

Terrill said, before the pigeon showed up, she had no idea so many people in this country race pigeons. She said she learned there are different leagues and different categories in each state.

Credit: First Coast News
This wayward pigeon is alternately known as Dave, Asher and Birdie by people at the Jewish Community Alliance.

Terrill said nothing is keeping the bird from leaving and he could “fly away easily” if he wanted to.

That may be because of all the birdfeed and nuts he’s getting. Terrill stocked up when the pigeon moved in. If he’s still there on Monday, she said, she’ll get him a birdbath so he has a steady supply of freshwater.

Terrill said she has a soft spot for any living creature that “does not slither” and has grown to love the pigeon.

She said she would be “so sad” if the bird leaves, but believes he has “no desire” to do so.

“He’s kind of just made this his home now,” she said.