The final resting place of the 'Jarvis Lord' freighter had been a mystery for 135 years, until shipwreck hunter Ross Richardson found her in northern Lake Michigan. 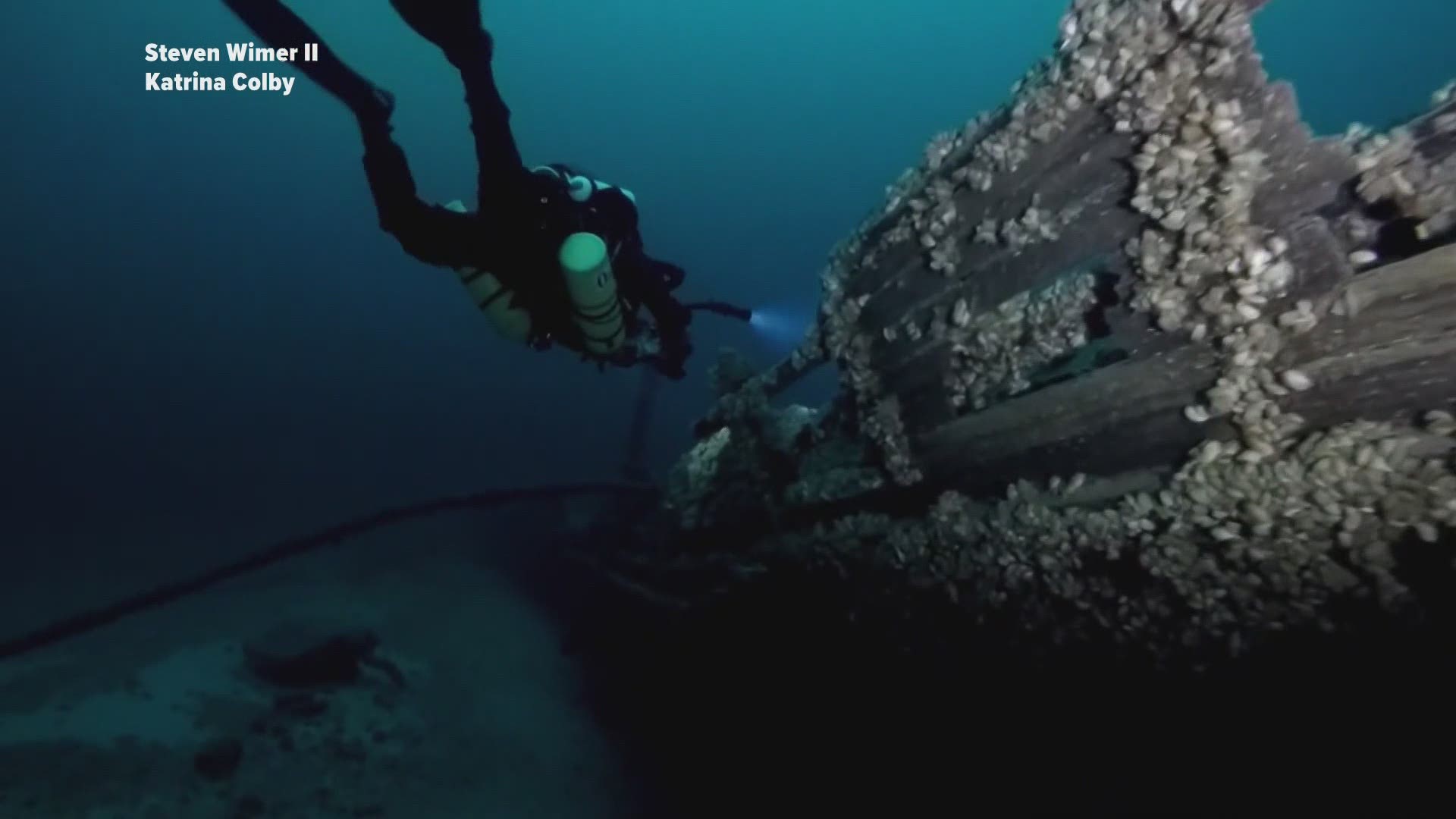 GLEN ARBOR, Mich. — Ever since she sank in Lake Michigan in 1885, numerous shipwreck hunters have tried and repeatedly failed to find the final resting place of the freighter, Jarvis Lord.

The 135-year mystery came to an end recently when the wreck site was discovered and identified by a well-known Michigan shipwreck hunter, who invited 13 ON YOUR SIDE along to document his entire expedition.

"There's probably a dozen shipwrecks that haven't been discovered along the Manitou Passage," said Ross Richardson, shipwreck hunter and author who operates the website MichiganMysteries.com. "I would like to find as many along there as I can."

The Manitou Passage is a Lake Michigan waterway that separates the Michigan mainland from North and South Manitou Islands. The Passage used to be a 'pinch point' for large vessels traveling north on Lake Michigan.

Ship captains would choose to travel through the Passage because it cut time off their route to the Straits of Mackinac.

"It used to be quite a congested area," added Richardson. "That's why it's a graveyard for many lost vessels."

Richardson, who makes his home in Lake Ann, Mich., has discovered more than a dozen Lake Michigan shipwrecks - including his 2010 find of the elusive and highly-coveted 'Westmoreland' steamer - a vessel that foundered near South Manitou Island in a winter storm on Dec. 7, 1854.

In 2018, Richardson also found and identified the W.C. Kimball schooner, which sank near the Manitou Islands in 1891.

During the spring, summer and fall months each year, Richardson often makes the short 25-minute trek northwest of Lake Ann to Glen Arbor, Mich., where he launches his boat and spends hours in the Passage using his side scan sonar to comb the lake's bottom, with the hopes of solving more shipwreck mysteries.

One shipwreck in particular, which history says sank somewhere between Sleeping Bear Point and the Manitou Islands, has eluded shipwreck hunters for more than a century.

"It's a big, wood vessel," said Richardson. "The Lord is actually the predecessor to the Edmund Fitzgerald."

Credit: Ross Richardson
The 'Jarvis Lord' was a 193-foot freighter that was the predecessor to the Edmund Fitzgerald. She sank in the Manitou Passage in 1885.

On August 17, 1885, the Jarvis Lord was making its way through the Passage, carrying a load of iron ore, when it mysteriously sprung a leak and started taking on water. Captain Richard Neville ordered the steam-powered pumps to start but the pumps weren't able to keep up with the rising water.

"With the heavy load of ore, the Jarvis Lord was sinking fast, so Captain Neville ordered all crew members to the lifeboats," said Richardson. "The lifeboats, containing all 20 crew members, had to row seven miles where everybody found safety at Glen Haven."

Meantime, the Jarvis Lord disappeared from the surface and made its way to the lake's bottom.

"I've spent considerable amount of time trying to find [the Jarvis Lord]," said Richardson. "It's not where many reports say it's supposed to be."

After countless hours, and multiple unsuccessful attempts over the years, Richardson's luck seemed to take a turn on May 31, 2019.

"I was in the Passage running some lanes slowly scanning the bottom when an unusual image suddenly appeared on my sonar," said Richardson. "I knew it was big but initially couldn't make out what it was.

"I thought, 'Could this be the Jarvis Lord?'"

Richardson says he recorded the coordinates of the location on the lake so he could easily venture back out there again to continue investigating.

As spring gave way to summer 2019, Richardson was hoping he could get a technical diver down to the lake bottom to get some eyes on the object, but personal schedules, combined with his ongoing search for the W.C. Kimball, wouldn't allow for it.

"We had to go into the long winter months knowing we'd have to wait until at least the following spring to learn anything more," said Richardson.

In November 2019, Richardson reached out to 13 ON YOUR SIDE, revealing that he may have found the Jarvis Lord, and invited us to join him the following spring to document an expedition with he and his crew.

On June 24, 2020, Richardson had assembled his crew for the expedition. Fellow shipwreck hunters Cal Kothrade and Steve Wimer II traveled from Milwaukee, Wisc. to Glen Arbor and piled all their gear onto Richardson's boat.

13 ON YOUR SIDE was also on the boat with them.

"I'm excited to see what it is," said Wimer, an experienced, mixed-gas, technical diver who has dove and documented several shipwrecks. "We've been looking at pictures and talking about it for six months."

Lake conditions that day were far from conducive for a shipwreck expedition. The forecast called for waves to be 1 foot or less. As Richardson slowly drove the boat into the Manitou Passage, it was being slammed by 3-5 footers.

On numerous occasions during the boat ride, Richardson considered canceling the expedition, but ultimately choose to fight the angry lake and follow through with it.

"We are there," said Richardson, as he steered his boat against the heavy lake chop to the location of the mystery object. "She's right underneath us."

The crew needed to drop anchor on the object and hook onto it quickly or the rough waters would push them away from the location. While Steve Wimer started getting into his dive suit, Cal Kothrade made his way to the back of the boat where he threw the anchor into the water and began unraveling the line as it lowered to the lake bottom.

"We're upwind of the wreck," said Kothrade. "We're going to put [the anchor] on the bottom and we're going to let it drag with the current."

"Let it all out," yelled Richardson. "Just make sure to keep it away from the propeller."

"Steve, talk to us; give us your thoughts," said Richardson, asking Wimer if he was comfortable with would no doubt be a very dangerous dive.

As the large waves continued to beat against the boat, Wimer put on his mask, jumped into the lake, then began to slowly follow the anchor line 220 feet below the surface.

Topside, the three crew members, and 13 ON YOUR SIDE, bobbed back and forth and waited for Wimer's return.

"Once Steve's back on board, we know he's safe, and we get his equipment stored away, he'll regale us with tales of what he saw down there," said Richardson. "Whatever it is, I know it's big.

"It could be one of probably three different vessels. We'll see if it's the one we think it is or a surprise."

45 minutes after Wimer descended to investigate what was below on the lake bottom, he resurfaced.

"I see his bubbles," yelled Kothrade, who was sitting on the bow.

Wimer, while being swallowed by the huge swells, managed to swim to the boat's stern where both Richardson and Kothrade helped him back on board.

Once he got some of his equipment removed, he collected himself and began sharing what he saw.

"There's masts laying all over," said Wimer, dripping wet, with Richardson and Kothrade listening with anticipation, and 13 ON YOUR SIDE documenting. "There's a big windless on the bow; the starboard side is kind of intact, but the portside is peeled away and leaning; from what I could see, the stern is all collapsed and kind of buried, broken up and there's a big debris field all around.

Richardson then asked, "Could you make out any kind of cargo?"

"If there was, the deck was collapsed and I couldn't tell," said Wimer. "There had to have been four hatches; the starboard side is on an angle; when I got down and got the camera on and started filming, I saw what looked like a boiler; I then turned around and swam back to the bow to see if I could read a name on the ship, but couldn't.

"Sounds like the Jarvis Lord to me," said Kothrade.

Once the group arrived back on shore in Glen Arbor, they loaded the boat back on the trailer and drove back to Richardson's home in Lake Ann, where the debrief about the day's adventure would intensify.

Richardson, Kothrade and Wimer gathered on Richardson's deck. 13 ON YOUR SIDE continued to document as the men began surveying photos and a 3-D scale model of the Jarvis Lord, hoping Wimer could cross-reference what he saw on the lake bottom with the imagery and information they had before them.

After an hour of debrief, and later reviewing more than 30 minutes of raw dive footage of the wreck site shot by Wimer, Richardson had heard and seen enough to comfortably go on the record and identify the shipwreck.

"It's the Jarvis Lord," Richardson said with conviction. "Its final location is a few miles away from where it was believed to have sunk, but that's not uncommon.

"The smoking gun that convinced me we had found the Jarvis Lord was when I saw the large boiler on the ROV footage laying off to the side of the wreck."

Lake Michigan still has many unidentified shipwrecks sprawled across its sandy floor, but thanks to the team of Ross Richardson, Cal Kothrade and Steve Wimer II, the Jarvis Lord is no longer one of them.

Credit: Dan Swank
Not far off from the side of the main wreck site of the 'Jarvis Lord' lay its wheel, covered in zebra muscles, but still very recognizable.

If you would like to learn the detailed history of the Jarvis Lord, from when it was build and launched in 1872, up through when she sank 13 years later, click HERE.

Credit: Cal Kothrade
Shipwreck hunter and artist Cal Kothrade, who was part of the Jarvis Lord discovery crew, created this painting of the day the ship sank.