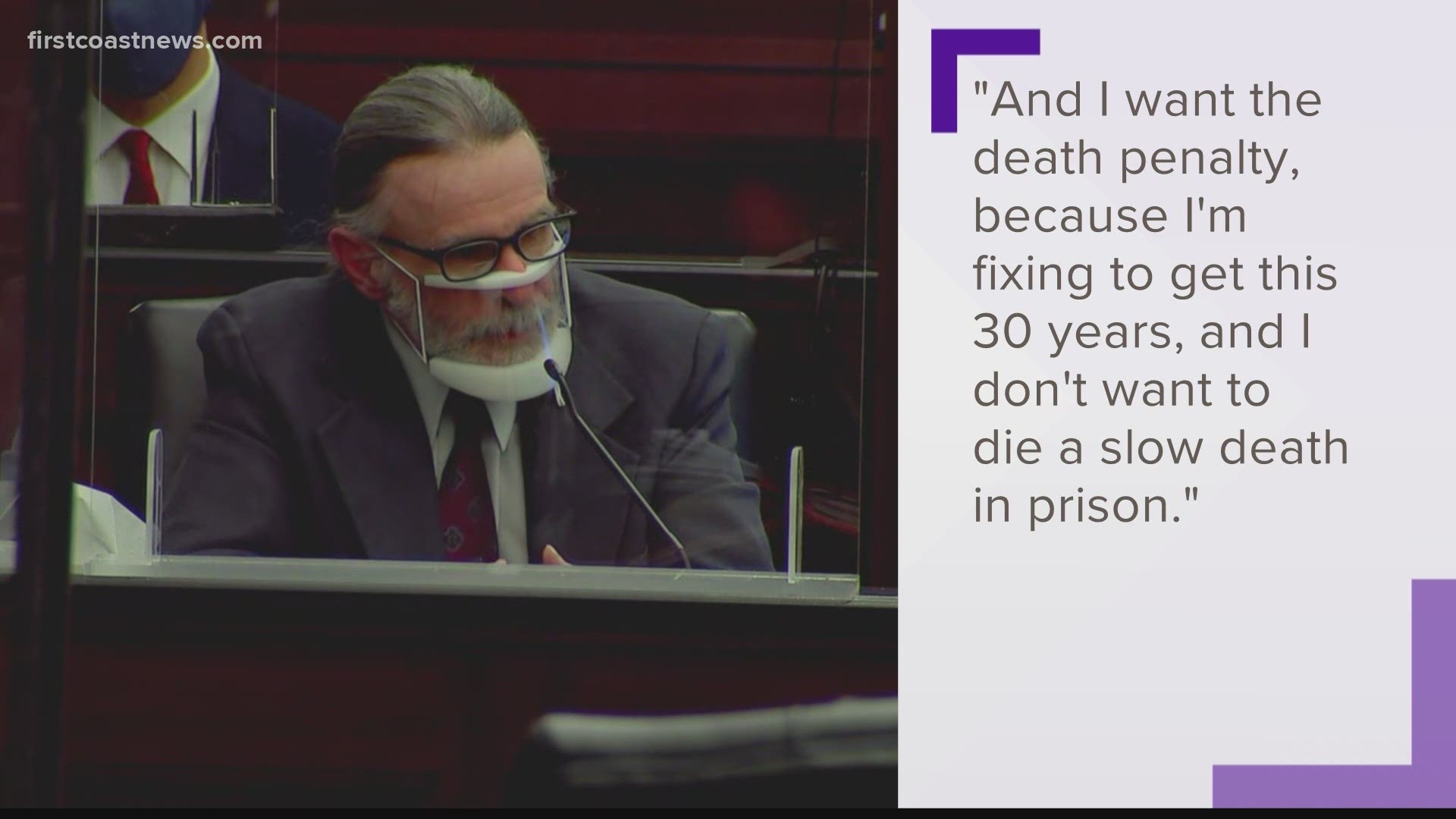 JACKSONVILLE, Fla. — Warning: Some of the descriptions in this story may be disturbing to some viewers.

“Frighteningly real.” That’s how the lead detective in the case against accused killer Russell Tillis described the details of the alleged crime.

Tillis is accused of the first-degree murder of 30-year-old Joni Gunter, whose dismembered remains were found buried in his Southside backyard.

Here's what you missed during Thursday's court proceedings.

Tillis testimony is done. He told jurors "the body of Joni Gunter arrived at my house in my brother’s trunk deceased. How she met her death I have no clue." Prosecutors say they MAY call Claude Tills as rebuttal witness @FCN2go https://t.co/k2PoYXbACH

His storytelling style is also staggeringly non-linear, no question answered without "going back" to some prior circumstance that contributed to it. His attorney Charles Fletcher trying to keep him on track. @FCN2go https://t.co/2pZUFWvHxi

Tillis about to take the stand. He plans to plead the 5th on any questions about the dismemberment of Joni Gunter. He told the judge he believes his case will be remanded on appeal, and he doesn't want to create legal exposure for himself on that issue. @FCN2go https://t.co/jnoouETVo0

Tillis' attorney says the defense will not call any witnesses besides him. @FCN2go https://t.co/bpUfOxVaIE

Medical Examiner Robert Buchsbaum says Joni Gunter suffered 11 different bone fractures -- 7 on the skull, 1 on the nose and 3 fractures to her hand, "indicative of an assault occurring when the individual was still alive." https://t.co/W6EHnO0s7v pic.twitter.com/CTaeubj8dD

Tillis set to testify later, maybe 2:30. Judge says based on that, we will have closing arguments Friday & bring jurors back Monday for jury instructions and deliberations. The penalty phase, if there is one, would start Tuesday EXCEPT defense just said they may seek a delay.... https://t.co/GsTJoJahkS

Detective Sullivan said it took 10 months after his confession to identify the remains of Joni Gunter. "She had basically been a forgotten victim in this." @FCN2go https://t.co/ZHFk0jCdMD

Just got the full transcript of the Russell Tillis' jailhouse confession. It is not light reading, folks, so don't click if you don't want to go there @Fcn2go https://t.co/SRKy2WrNSI https://t.co/K0j0wkyWtd pic.twitter.com/M2p7cCRk33

The audio of Russell Tillis' jailhouse confession is difficult to hear in court and on the livestream. I have requested a transcript from @SAO4Florida and will post it when I get it. @FCN2go https://t.co/8QKM2MtfwX

We may hear from Russell Tillis today. Yesterday his attorney told jurors he will take the stand to tell his side, "He's been dying to do so for years." First up, though, the rest of the recorded jailhouse confession. Here's yesterday's wrap story @Fcn2go https://t.co/DlkpfVS3dm https://t.co/4aMOQEPTpO

Police discovered Gunter’s skeletonized remains in 2016 after Tillis described their location in a recorded jailhouse confession captured by fellow inmate Sammie Evans. Tillis now claims the confession was fabricated – a deliberate gambit to get the death penalty at a point where he was feeling despondent.

However, that three-hour recorded confession is the centerpiece of the case against Tillis, and paints a grisly portrait of life and his home.

Assistant State Attorney Alan Mizrahi read a lengthy verbatim portion of the transcript as part of his opening statement. In the segment, Tillis discusses how he held women captive in a soundproof room and rented them out to friends for money. At one point, however, he says one of the women recognized his brother Claude.

“The [expletive] girl recognized him. … He freaks out. He says, 'Man you’re gonna kill that [expletive].' I said, 'Hold up man, hold up. She’s making me money. [...] She’s [expletive] locked up in a soundproof room and all of a sudden she recognizes my brother."

“I gave him the Sawzall,” Tillis said in the recording. “He cuts her [expletive] head off and then he gets all squeamish. […] So I [expletive] finish.”

Claude Tillis was interviewed by police but was not charged with any crimes.

“He’s confessed to a murder he didn’t commit," Fletcher said. "And he’s made the confession so shocking that it guarantees the death penalty.”

Fletcher said Tillis knew there was a body buried in his yard, but didn't have anything to do with it.

“Everything in that confession is fake. He didn’t do it,” Fletcher told jurors. “He knows who did. He’ll tell you that. He’s been dying to do so for years.”

In addition to hearing parts of the recording, jurors heard from a forensic anthropologist who testified Gunter’s skeleton was dismembered with a reciprocating saw – something noted in the jailhouse confession.

Jurors also heard from a former prostitute who testified Tillis chained her to a bed and raped her, before she escaped.

“I ran to the Gate station,” the woman said. “I called somebody to pick me up. I waited and hid. […] I was petrified. I was hiding behind the ice machine.”