The officer who killed Jamee Johnson in 2019 was cleared of wrongdoing, but family disputes that and says they will reveal new evidence at a Friday news conference.

JACKSONVILLE, Fla — The family of a 22-year-old FAMU student filed a federal lawsuit Friday morning against the city of Jacksonville, the Jacksonville Sheriff’s Office and the officer who killed him during a December 2019 traffic stop. The suit says the officer violated Jamee Johnson's civil rights and used excessive force causing his wrongful death.

During the traffic stop, Jamee Johnson was shot and killed following a struggle with JSO Officer Josue Garriga.

A news conference was held Friday by the family and their legal team to discuss details of the lawsuit and to reveal new evidence.

During the news conference, Johnson family attorney Harry Daniels argued that Jamie Johnson was murdered the night of the traffic stop and pointed out what he claims are several inconsistencies with the official police report and what actually happened.

Police bodycam footage shows -- and a subsequent investigation found -- Johnson dove into his car suddenly during the traffic stop. Garriga said he thought Johnson was going for a gun he'd previously said was inside the car under his jacket.

Amid the struggle, the video shows, Johnson stepped on the vehicle's accelerator driving a short distance before crashing.

Garriga’s body cam is dislodged in the struggle, but footage from a second officer shows Garriga backing out of Johnson’s car firing four shots. Almost immediately he says breathlessly, “He tried to grab his gun on me.”

Soon after, Johnson can be seen outside of the car, lying on his back. "Please don’t let me die," he pleads. "I can’t breathe. I’m dying sir please. I don’t want to die. … I pray to god I don’t die.”

The two officers hold Johnson at gunpoint while awaiting backup and he dies minutes later.

State Attorney Melissa Nelson found Garriga’s actions were justified because he was reasonably in fear for his life.

But Johnson family attorney Harry Daniels challenges the official version. He cites what he calls misstatements by Garriga, saying "I think it's very clear that the video doesn't show Jamee reaching for a weapon."

Garriga's written account of the incident says, "During the physical struggle, I was able to grab the right wrist of the driver, which the handgun was still in, and was able to push myself out of the vehicle.  As I exited, I observed the suspect moving his body in my direction and I believed he still had the gun in his possession."

Daniels says, "Based on Garriga's statements that he's given versus the evidence and video evidence that we have is inconsistent. Quite frankly what he said is untruthful."

He says, it’s also inconsistent with the account of an eyewitness, a cousin of Johnson’s who said Johnson was shot while surrendering.

Investigators who interviewed the man, noted he initially denied seeing the shooting and found his account not credible.

JSO’s Response to Resistance Board, which also reviewed the shooting, found Garriga’s actions appropriate. But, Johnson’s father believes otherwise.  “Even though he made bad decisions that day, that's not grounds for an execution,” Harvey Johnson said.

David Chapman, Communications Director for the State Attorney's Office told First Coast News, “At no time during our investigation was this office inconsistent or untruthful with Jamee Johnson’s family or its representation. In July 2020, we issued a public report, the body-worn camera footage, and all of the records related to this investigation — we stand by our findings and encourage anyone interested to review them for the facts.”

City and JSO officials declined to comment on the case stating, "We don't comment on pending lawsuits."

READ THE FULL LAWSUIT BELOW: 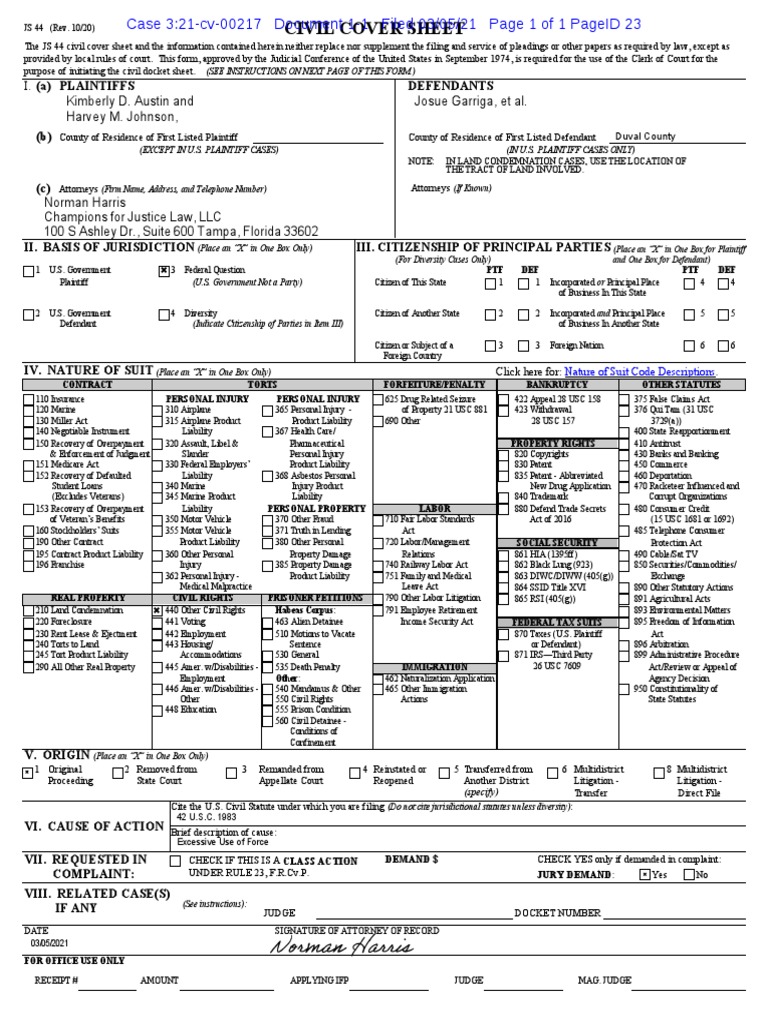 Civil Cover Sheet | Tort | Lawsuit
The family of a 22-year-old FAMU student filed a federal lawsuit Friday against the city of Jacksonville, the Jacksonville Sheriff's Office and the officer who killed him during a December 2019 traffic stop. 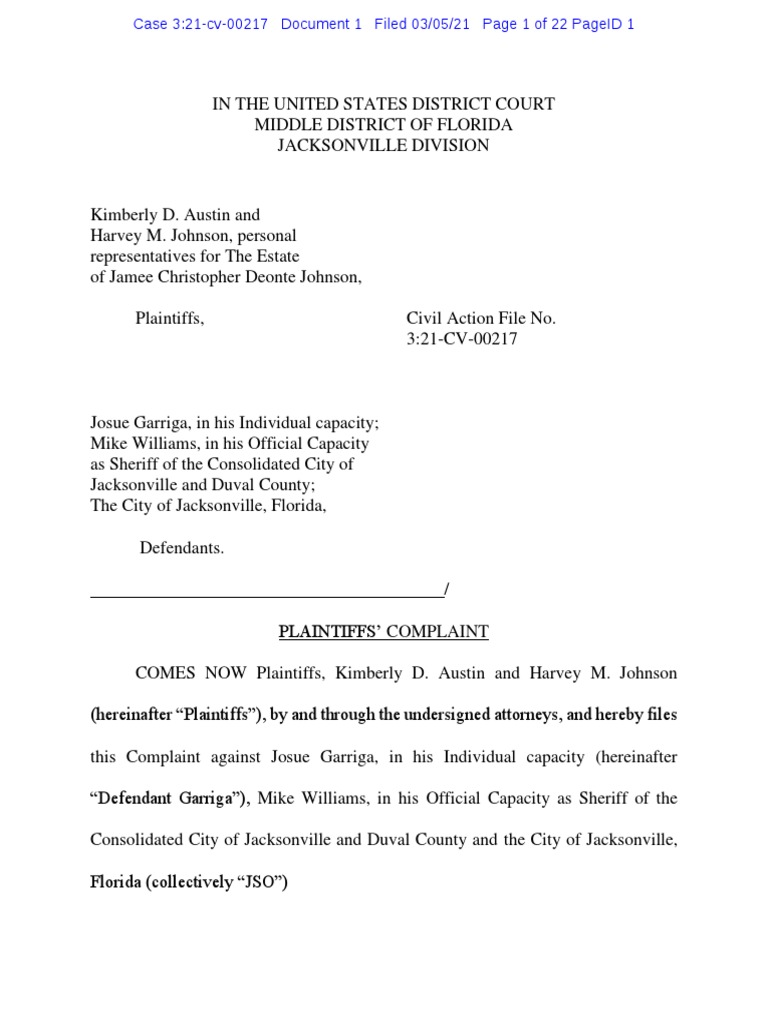