The bar pilots have one of the most dangerous jobs, and Lewis and Clark ride along as they usher gigantic ships into the St. John's River. 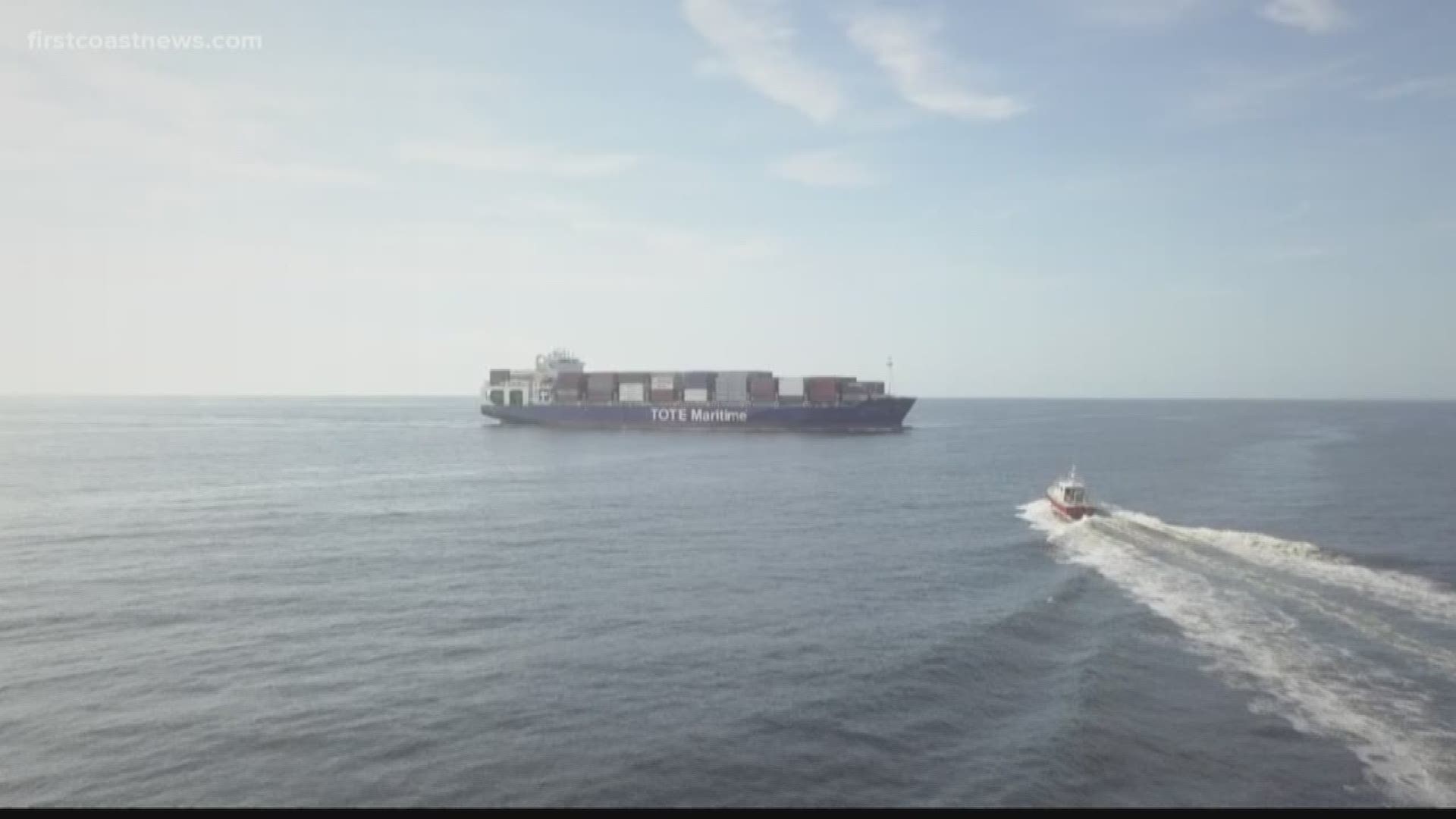 Seeing massive ocean liners coming up the St. John's River is both a fascinating and iconic sight here on the First Coast.

These ships are floating skyscrapers that move products all around the globe, pumping tens of billions of dollars into the state and regional economy.

But the boats don't just get to come into Jacksonville Port unchecked. They need special guidance to get through the tight turns and channel of the St. Johns River.

"When we come on board, we tell the captain that we've got it from here," says Captain Nathan Cook, President of the Pilots Association "We've got the local knowledge."

Right now the river has a depth of roughly 40 feet with tight turns and narrow spots. There are also various points along the channel where there is structural material along the bottom.

It's SJRBP's job to know every single nuance of the riverbed, so no ship ever runs aground.

"Part of getting the job here is that you have to be able to draw this river from memory," Cook says. "You must know every depth, every marker and every wreck on the bottom."

That knowledge starts four miles offshore at the sea buoy that marks the entrance to the St. John's.  From there they must know the length of the river 50 miles down to the Green Cove Springs shipyards.

"You have to make some 1500 trips on the river, two-and-a-half years of training after four years of maritime college," Cook says.

The knowledge is part one, the other part is having a love and appreciation for adrenaline rushing, high-risk maneuvers in often rough seas.

When a ship is coming into port, the pilots take one of their boats out to meet it. The boat gets about six inches from the ship, all while underway at around 11 knots.

That's when the life or death part begins.

The bar pilot assigned to guide in that ship has to climb up a ladder on the side of the ship with no safety harness and no net. Basically nothing between them and a deadly fall.

"If you fall from the ladder, you're probably going to get sucked into the propeller," Cook said.

There are 14 captains in the association who work 24 hours a day, 365 days a year.  That means sometimes making the climb in darkness and up to 20-foot seas offshore.

But Captain Chris Mons says he loves the job.

"It's exciting every time," Mons said as he was getting ready to board El Coqui, a 720 foot long Crowley Maritime container ship.

"You're on this small pilot boat, the huge ship is right here next to me, it's go time."

He makes the climb up, meets the first mate of the ship and then it's off to the bridge where he'll tell the helmsman exactly how to get to the Tallyrand Terminal.

"It's about a two hour trip from here," Cook said.

The pilots also have to make sure the ships get back out to sea. It's an intricate dance of dropping off and picking up these captains.

According to JaxPort, 1761 vessel calls were made in 2018. It's the busiest container port in the state of Florida and is currently the second biggest car import port in the country.

But they also have to bring in the cruise ships, and even large yachts, like Jaguars owner Shad Khan's Kismet.

"That's a job everyone fights for right there," he said.

But assignments happen on a rotation, he said. Getting to pilot Kismet is luck of the draw.

"They really have to know what they're doing, there really is no guessing, especially now with all the dredge barges in the river," Cook said.

Currently the St. John's River is being deepened by a series of the largest dredges in the country.  They're taking the river from 40 feet deep to 47, which Cook says will allow a much larger class of ship to enter the river.

And he says that brings a couple of new challenges with it.

"We've got to be in communication with every dredge barge on the river and let them know we're passing by," Cook said.

It's just more for these massive, floating cities to have to dodge each day. And newer, larger vessels coming in just means they'll have to adapt quickly to keep the port running and the river safe.

"The way we see it, we're protecting Jacksonville's most valuable resource. That's the St. John's River."