Judi Zitiello was diagnosed with stage 3 pancreatic cancer. She reached out to Trebek, who has stage 4.

Judi Zitiello was diagnosed with stage 3 pancreatic cancer in 2014. Her heart sank when she heard Jeopardy host Alex Trebek has stage 4.

She knows only nine percent of people with pancreas cancer are alive five years after diagnosis. "It's a death sentence."

She wants Trebek to see the hope she's found through her treatment at Mayo Clinic and in her inner faith.

"I believe the only reason I have been able to beat the statistics of nine percent is my faith in God and my positive attitude," Zitiello says.

She's in chemo now because her pancreatic cancer spread to her lungs.  But the largest tumor has almost vanished. She is optimistic the treatment will wipe out the other twelve smaller tumors.

Zitiello continues to raise money for pancreatic cancer research through the non-profit, Champions For Hope.

Zitiello says she's happy to share her letter to Alex Trebek with everyone. As a TV station which carries Jeopardy, First Coast News has learned Zitiello's letter has been delivered by hand to Trebek. 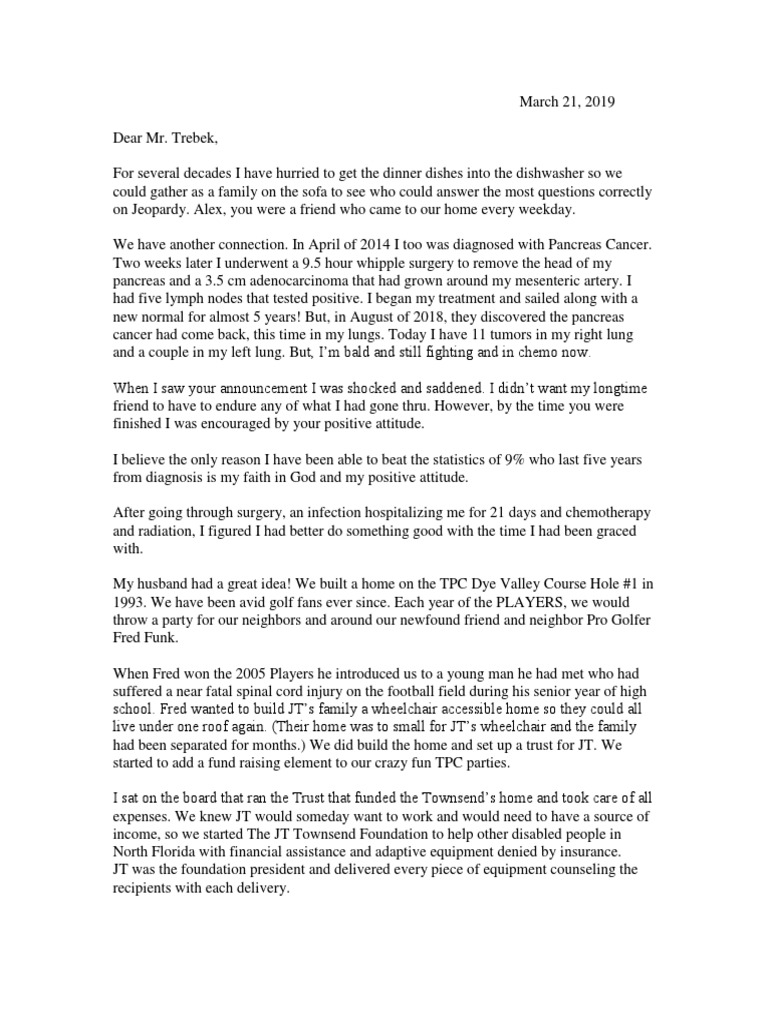 Alex Trebek Letter | Pancreatic Cancer | Medical Specialties
We have another connection. In April of 2014 I too was diagnosed with Pancreas Cancer. Two weeks later I underwent a 9.5 hour whipple surgery to remove the head of my pancreas and a 3.5 cm adenocarcinoma that had grown around my mesenteric artery. I had five lymph nodes that tested positive.