Internal investigators found Major Johnny Greenwood was in violation of a fireable offense, but Sheriff Gator DeLoach gave him a three-day suspension. 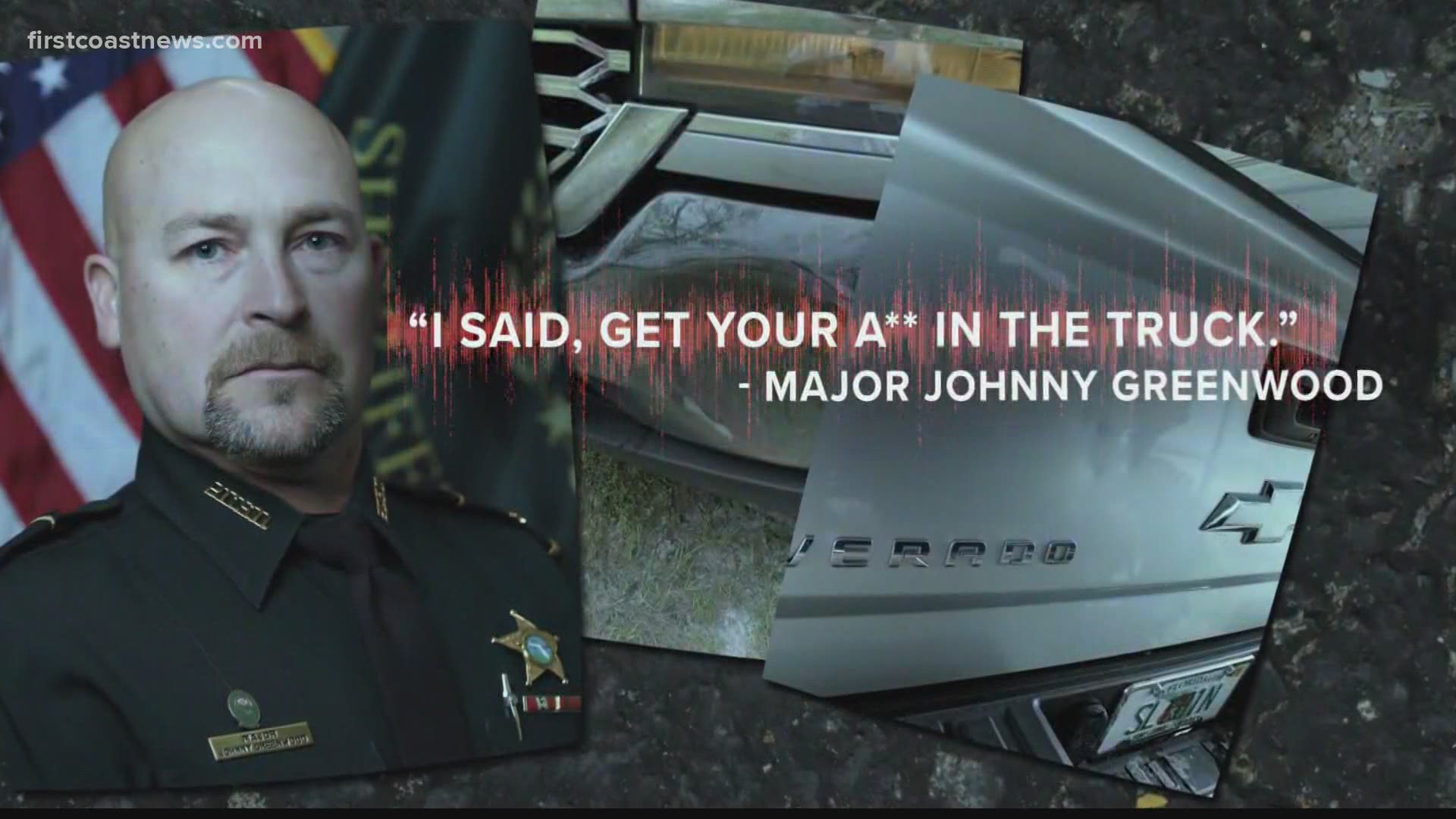 PUTNAM COUNTY, Fla. — Allegations of favoritism, interference in an investigation – even "potentially criminal acts" have been levied against a top law enforcement official.

According to an internal investigation obtained exclusively by First Coast News, Putnam County Sheriff Major Johnny Greenwood removed his 23-year-old son Tyler from the scene of an August car crash and suspected DUI. The report found Greenwood obstructed the investigation, "tarnishing" the agency’s reputation and committing a "gross violation" of agency standards.

The report found Greenwood committed a fireable offense. But Greenwood remains on the job, given only a three-day suspension.

Around 3 a.m. on Aug. 30, according to police reports and internal investigation documents, Tyler Greenwoood called 911. His dented truck was parked near the intersection of Gaskin Road and Silver Lake Drive in Palatka. But he was initially unable to say where he was.

Tyler Greenwood was more right than he realized. After dialing 911, he called his father – Major Greenwood – who arrived before deputies did.

"I said, 'get your ass in the truck,'" Major Greenwood later told internal investigators. “I'm embarrassed that he called 911. My family's calling the sheriff's office...”

According to investigators, Major Greenwood picked up his son and took him from the scene of the incident. The problem was, the deputies who responded say it was also the scene of a crime.

Tyler initially reported as a victim, saying he'd been jumped at a nearby house party. But as officers would later learn, he had been chased from the party, struck another car as he left, and -- as Tyler himself would later admit to investigators -- he was "drunk."

Officers who responded to the 911 call told investigators the whole incident didn't sit right with them.

“You as a law enforcement officer scoop up your son from the scene after he calls in a crime?” Putnam County Deputy Jared Davis told investigators he recalled thinking. “It made me feel pretty pissed.”

Deputy Davis was one of three officers who responded that night. All three said Major Greenwood’s meddling went beyond just removing his son from the scene. When officers tracked the the Major and his son back to their house to conduct a DUI investigation, both said Greenwood and his wife, Kimberly, interfered.

"I was pissed because it was bullshit," Kimberly Greenwood told investigators when asked about her conduct that night.

According to officers, Kimberly began recording the deputies on her cell phone, threatening to call a lawyer and yelling that they were ruining her son’s life.

The three officers said Major Greenwood initially told his son not to submit to a field sobriety test, and even let him drink a beer – potentially spoiling the DUI investigation. All three recall the major saying, "In all my 26 years in law enforcement, I’ve never seen anything like this.”

Greenwood didn't respond to our interview request, but he told investigators that he never intended to interfere. He said when he took his son from the scene, all he knew was that his son had been "jumped." He said he didn’t know about the earlier crash or the suspected DUI.

“You know I never would do anything to jeopardize an investigation," Greenwood said. He noted that when he learned officers were coming to the family's property, he went and got Tyler from the adjacent house where he was staying.

“If I really was going to interfere, I wouldn’t have gone and gotten the kid out of his house," he reasoned. "Everybody knows the rules – you don't cooperate if you want to beat a DUI."

But Deputy Davis said the scene was intimidating, and he didn’t see any alternate explanation for the major's actions. "After the totality of everything that was told to us, it sounded like somebody was more or less were trying to duck a DUI,” Davis explained.

Tyler eventually submitted to a sobriety test, and while his performance wasn't perfect, deputies determined they couldn’t make an arrest. They did write a ticket for improper backing, but that charge was later dropped. But as Deputy Nathan English noted, they felt constrained by the circumstances.

“It puts you in a really hard position," English told investigators. “I felt almost ashamed, which is odd, because I didn't put myself in that situation. I'm not the one who had done any wrong.“

Investigators ultimately determined Greenwood interfered with an official investigation and committed a "gross violation" of the agency’s Standard of Conduct – a potentially fireable offense. But Putnam County Sheriff Gator DeLoach rejected that penalty, and instead gave Greenwood a three-day suspension.

Deloach declined our interview request, but in a statement Greenwood's behavior "did not rise to the level of gross violation." He said that because the major’s wife also interfered in the incident, it would be "fundamentally unjust" to hold the actions of his family against him.

Family was also the reason Greenwood told investigators he acted as he did that night – saying he was thinking less like a law enforcement officer, and more like a dad.

“Did you ever consider how that would make them feel?" an investigator asked Greenwood about his actions that night. "You're a major with the agency, you’ve got two deputy sheriffs out there. How are they supposed to feel?”

"I get it now, but at the time that isn't what was in my mind,"  Greenwood replied. "It was really making sure my son was treated right."

Allegations of favoritism, interference in an investigation – even "potentially criminal acts" have been levied against a top law enforcement official.

The exclusive investigation is coming up on @FCN2go at 11. pic.twitter.com/Gs3rPQxmRu