Officers only received verbal counseling before the 11Alive Investigators demanded internal documents and police videos. Now they are gone -- along with the chief. 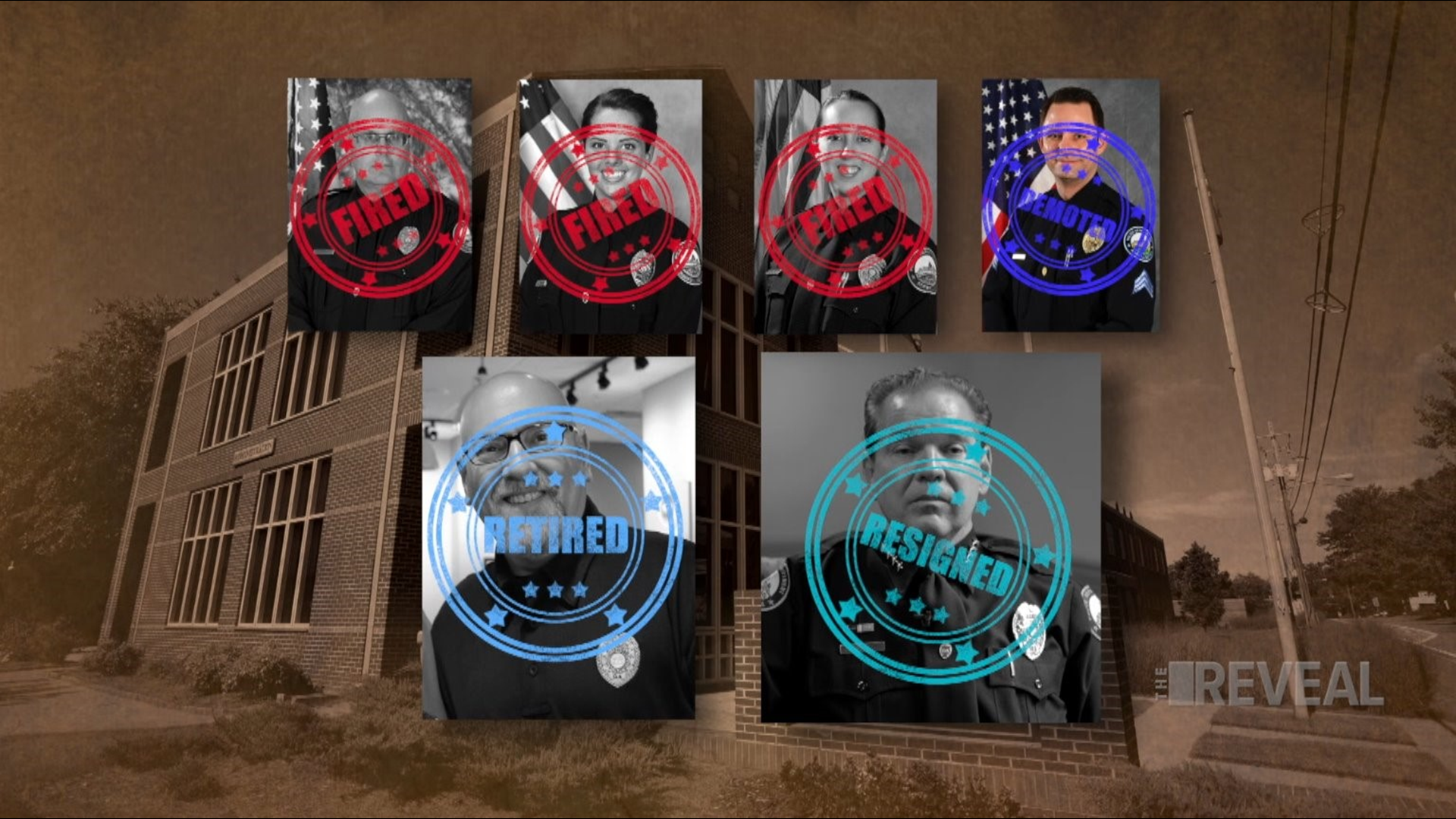 The City of Roswell commissioned an audit of its police department by an outside agency last year as a direct result of our investigations.

The Reveal investigative team is currently reviewing the audit report as part of our ongoing investigation and will have an in-depth analysis of the full 185 page report soon.

The Roswell Police Department has a new acting chief of police, after Chief Rusty Grant resigned earlier this month.

The official announcement simply called it a retirement, but Grant’s own email to the police department said his intent was to resign and retire from law enforcement. His departure follows 6 months of exclusive investigations that revealed several scandals inside the department – incidents hidden from the public until 11Alive demanded internal records. 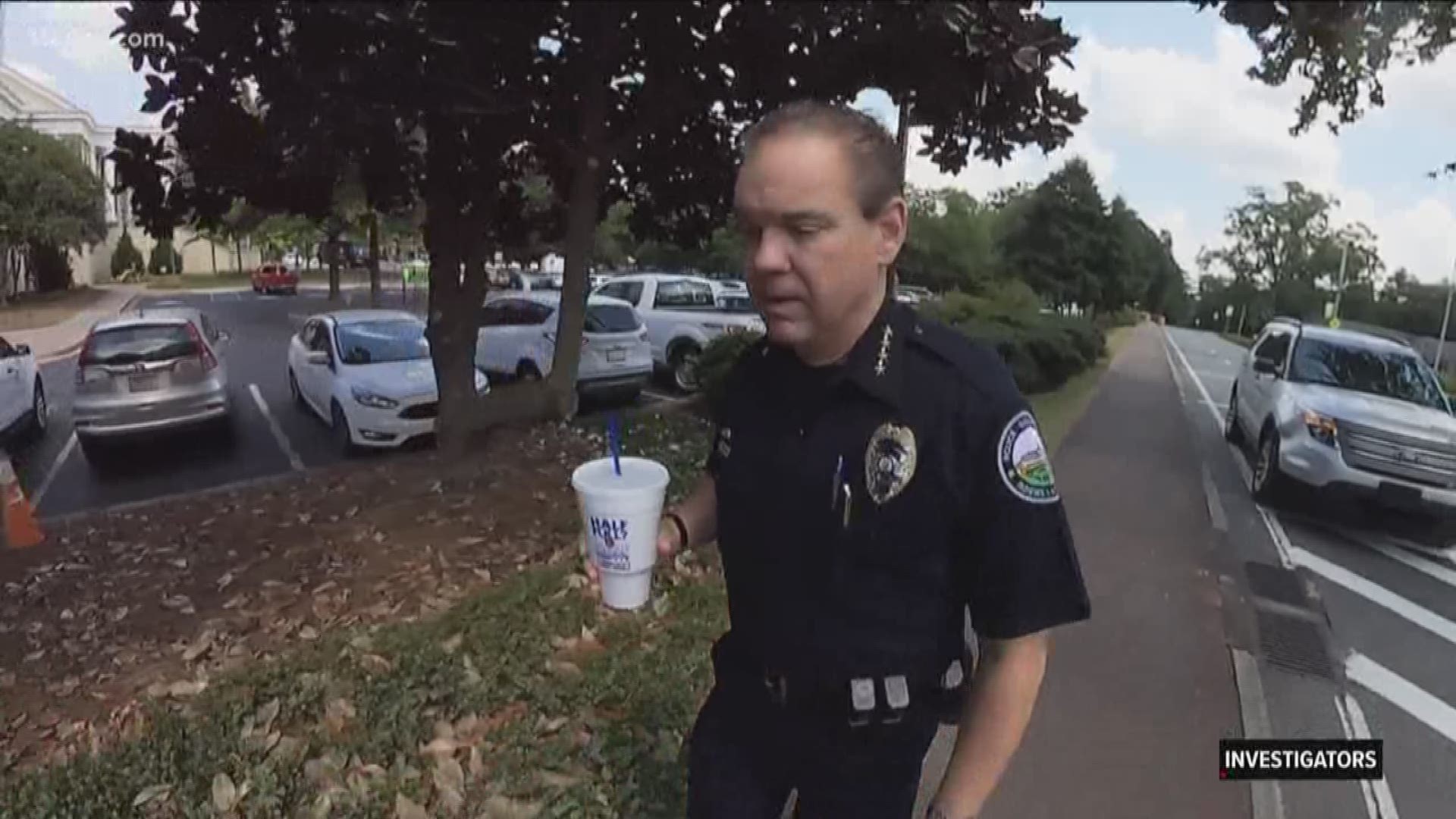 Two Roswell officers were fired after 11Alive Investigators uncovered body camera video showing the officers using a ‘coin flip’ app when deciding to arrest a driver for speeding. One of those now-former officers, Courtney Brown, blamed her termination on the international media coverage of the incident that followed our reporting. Brown said she had already received punishment in the form of verbal counseling.

Now a third officer has been fired, and a fourth resigned amid new investigations by 11Alive.

Officer Brad Hill also received only verbal counseling for failing to help a fellow officer who was trying to save a dying suspect. Hill was the closest Roswell officer, just 1.3 miles away from the emergency. But police GPS data obtained by 11Alive Investigators showed his cruiser never moved during the life and death event – even as he watched two Roswell cruisers race by him with lights flashing and sirens blaring

Multiple officers from Roswell and Alpharetta responded, because the handcuffed suspect lost consciousness in the back of the Roswell patrol car in Alpharetta between the jail and the hospital.

The suspect had apparently overdosed on opioids and he was saved with Narcan administered by the officers who also rushed him to the hospital because the ambulance never made it in time.

Officers from both departments and a police dispatcher received Roswell’s Lifesaving Medal for their work in saving the man's life.

“One of the worst things a police officer can do is not help out another police officer,” Hill’s lieutenant, Bernie Holland, said in an internal affairs interview.

Officer Hill told internal affairs investigators that he did not respond for a number of reasons. He stated that he wasn’t dispatched, the Roswell officer requested only an ambulance and the emergency was in Alpharetta -- just outside his jurisdiction.

But there was another reason, according to the internal investigation case file: He was already under investigation for another case 11Alive Investigators followed -- the intentional freezing of a 13-year-old boy, to get him to talk.

“Did you make any comments related to current Internal Affairs investigations and not wanting to get in any more trouble?” an investigator asked during his interview.

Hill was one of the officers on the scene when Sgt. Daniel Elzey decided to roll down the windows of a patrol car, and turn off the heat on one of the coldest nights of the year. Body camera footage showed Sgt. Elzey and the other officers waiting in warm patrol cars with the heat on, “freezing out” the handcuffed boy in the cold cruiser until he agreed to tell officers the truth.

Elzey – named Supervisor of The Year by the police chief after the incident – was demoted to patrol officer after we obtained the video through the open records act.

Before Elzey intentionally kept the boy cold, Hill and other officers noted that the boy was special needs, calling him “24,” the Roswell Police code for “emotionally disturbed.”

In late September – while Hill was under internal investigation for both the freezing incident and for not responding to the overdose call – Chief Rusty Grant approved Hill’s raise and promotion to Master Police Officer (MPO), which frustrated the officers who did respond.

“Hill getting promoted to MPO -- and I just found out about it, and it frustrated me because I knew about all of this,” Officer Zack Kowalske told Internal Affairs in a recorded statement.

Those officers on the overdose call turned in Hill, complaining to supervisors who opted to counsel Hill verbally.

Days after 11Alive Investigators asked for Hill’s GPS data, Chief Grant offered him a chance to resign. Hill refused, saying it would be reported to the state as a ‘resignation under investigation.’

When Hill was questioned by Internal Affairs, he said, “I’m going to be found wrong in this. It’s clear in the way that y’all ask the questions. So can we just get it over with?”

He was found in the wrong, and Chief Grant fired Officer Hill on Nov. 16, just two months after the chief had promoted him while he was under investigation.

The freezing incident is still part of a criminal investigation by the Fulton County District Attorney, a case launched only after we requested the body camera recordings. 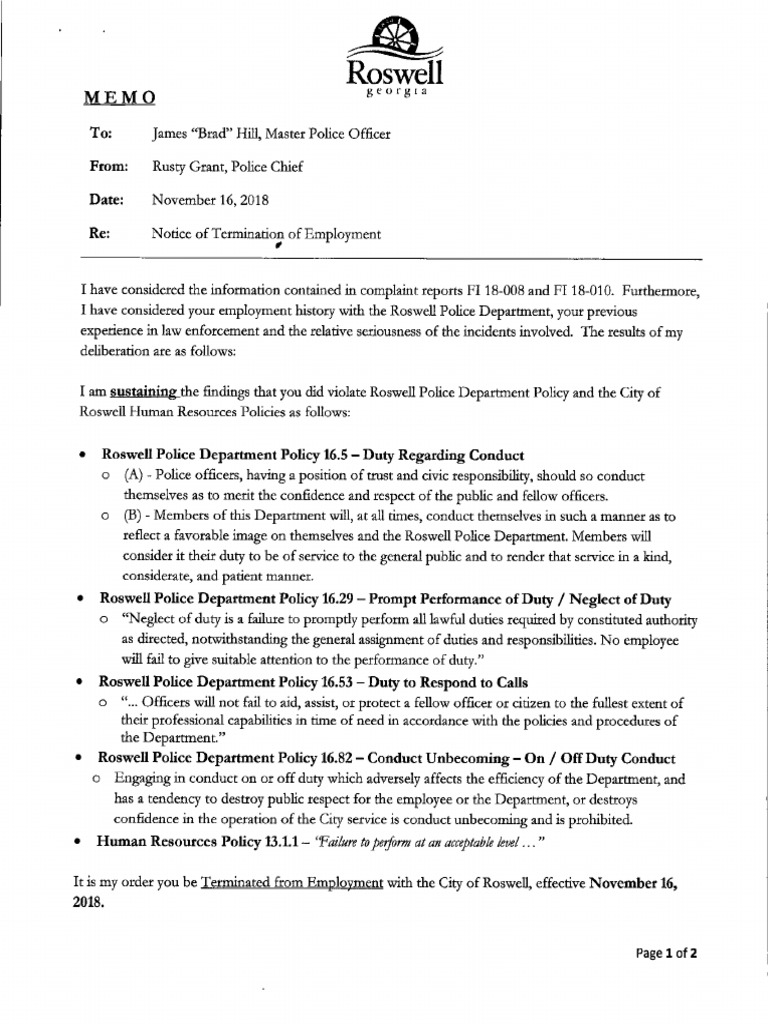 Officer Daniel MacKenzie resigned from the Roswell Police Department earlier this month. He wrote in his resignation letter, “I have a non-law enforcement opportunity that I wish to pursue” and he congratulated Chief Grant on his simultaneous retirement.

MacKenzie was also under investigation at the time of his resignation, and had been on administrative leave without pay following an incident where he punched a handcuffed suspect in the back of his police cruiser. The suspect had been kicking the security divider in his patrol car, MacKenzie reported.

Several felony charges against the suspect were suddenly and inexplicably dismissed right before Christmas by the Fulton County District Attorney -- the week before MacKenzie turned in his resignation notice.

An internal police source said the punching was caught on both body camera and backseat camera recordings in MacKenzie’s police car. The 11Alive Investigators demanded copies of those videos in early November. The videos were withheld because the criminal case against the suspect was still pending.

The police department is allowed to release such videos at its discretion regardless of the case status, but Georgia law allows law enforcement to withhold such videos, even if they capture police misconduct.

After the charges against the suspect that Officer MacKenzie punched were dropped, Roswell Police told us we could not have other records related to MacKenzie’s internal affairs investigation, citing the same code section that allows police to withhold records that are part of a criminal investigation.

We don’t know who is under criminal investigation now, only that the suspect that the officer punched had all of his charges dismissed.

The six-page public police report of the punching incident has only a single paragraph describing the arrest. There is no mention of the officer punching the suspect, or what led up to that action.

But there’s another report you’re not allowed to see.

The 11Alive Investigators obtained a copy of a 12-page report from the same officer and the same incident, that includes a lengthy narrative filed by the officer. An internal source says there is a drop-down menu when printing reports where officers and records clerks can print a public or confidential version of the same incident report.

Under the Georgia Open Records Act, police incident reports are always subject to release to the public and the press, regardless of whether the criminal case is still pending. Courts have ruled that such reports by any name, including “supplemental report” or “narrative report,” are to be disclosed without exception.

“The police officer’s written statement is evidence in a pending prosecution in that he is a direct witness to the charge of obstruction of a law enforcement officer and interference with government property. While the records you request are public records, the officer’s statement is still part of an on-going prosecution in Fulton County and are not part of the initial police report,” Davidson wrote in response to our objections in November. 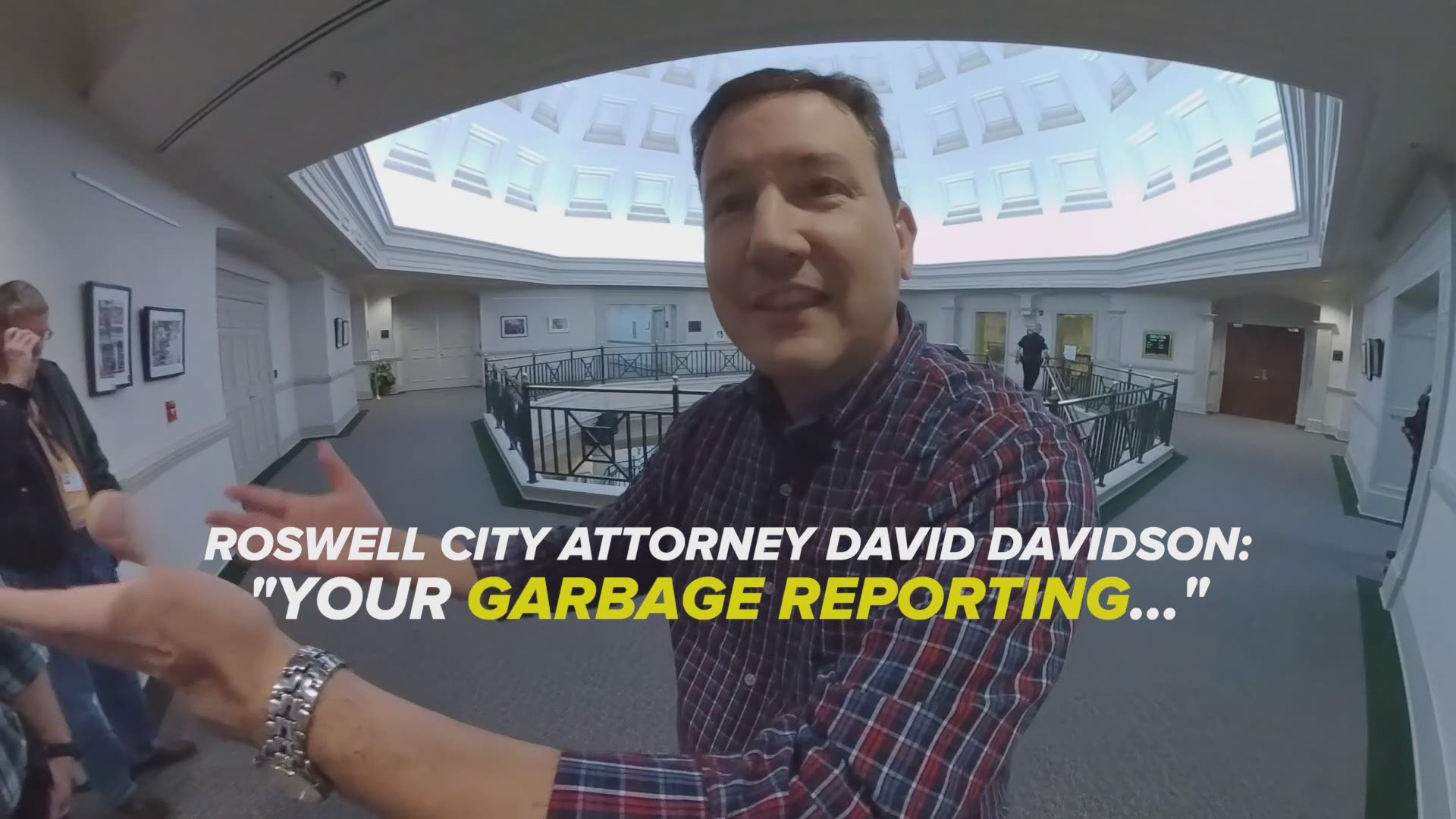 The officer narrative, which is supposed to be public, is even titled “confidential” on all Roswell Police incident reports.

If it were an additional statement from an officer who is also a witness in an ongoing prosecution, it would not be included in middle of a standard incident report where the regular narrative usually appears.

There is no indication in the ‘public’ report that anything is missing or withheld.

The reason the missing officer narrative is important is that it includes the only mention that the handcuffed suspect was punched by the officer.

“I punched the subject above his left cheek with my closed fist,” MacKenzie wrote. “This was to both garner compliance to turn him to grab his handcuffed arm and the advantage if he became violently thrashing again, and also as a distraction measure to avoid further confrontation,” he stated in the confidential section of the report.

We have resubmitted our request for the video, and Roswell Police have not yet responded.

“GETTING OUR ASSES HANDED TO US.”

Officer Kowalkse, as part of his Internal Affairs interview, commiserated with the investigator about our reporting that has left the department in crisis.

“So everyone thinks that this is a terrible place to work for, and everyone is leaving so quickly, and we just have people walking out the door,” Officer Kowalkse said, adding that people say, “how can you ever work for this place?”

"I’ve been here for 10 years. I’ve worked under four different chiefs. This sucks, this does absolutely suck. I will absolutely, whole-heartedly agree. It’s not unsurvivable. It just takes time. That’s any agency. We just happen to be getting our asses handed to us," Kowalkse said.

The Reveal is an investigative show exposing inequality, injustice, and ineptitude created by people in power throughout Georgia and across the country.  It airs Sunday nights at 6 on 11Alive.