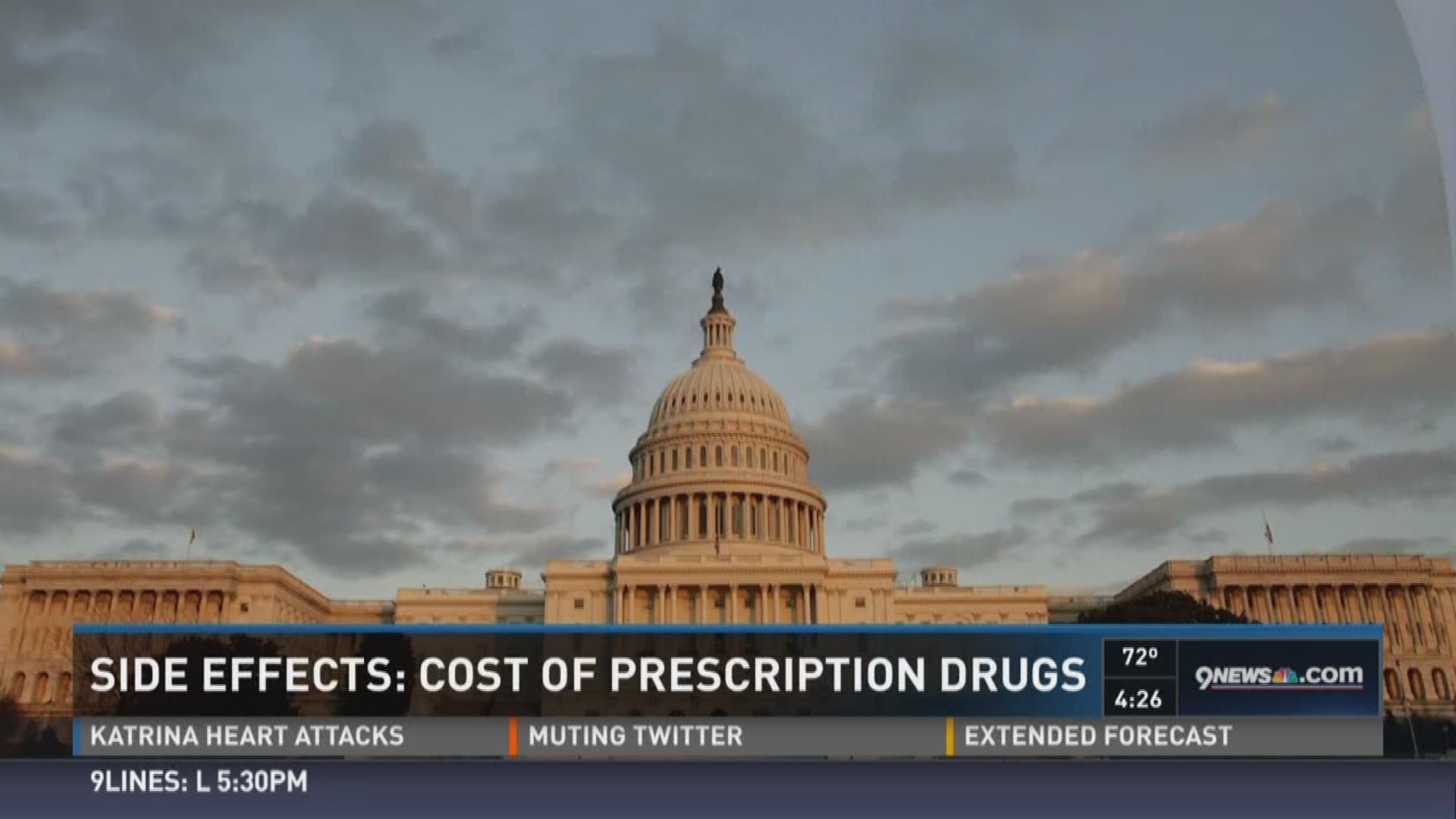 Maybe it’s only fitting that nearly a century after a trio of scientists in Canada sold the patent rights on insulin for $3, millions of American diabetics now rely on a trio of drug manufacturers to supply them with a drug they need to stay alive.

Only now, instead of a few dollars at play, insulin generates billions in revenues for the three companies that sell it.

For the millions of American diabetics who depend on insulin to live, it’s an economic paradox they say they can no longer afford to ignore.

“Is my daughter’s health worth that much more money to you?”

Meet 4-year-old Juniper Himes. She heads down her slide with the kind of boundless energy only kids her age can truly understand.

Her parents, James and Ariel, don’t need to hear her laugh to know her blood sugar levels are good. They can see it in her smile.

It’s not always this way. Such is life, they say, for the parents of a type 1 diabetic.

Juniper Himes is 4-years-old -- and one of 1.5 million Americans who have type 1 diabetes.&nbsp;

Until that day, however, only insulin will keep her daughter alive. And it’s now more expensive than ever.

“It’s beyond stressful trying to keep my daughter healthy and then trying to afford her medication,” Ariel added.

As many as 1.5 million Americans have type 1 diabetes, according to the American Diabetes Association.

Type 1 patients don’t produce the insulin necessary to get glucose from the blood to the body’s cells.

Juniper Himes&#39; need for Insulin has put a financial strain on her family, as they deal with the increasing cost of the life-saving drug.&nbsp;

When 9Wants to Know put together a list of 100 drugs that have increased in price by 70 percent or more since 2012, we found it impossible to ignore the presence of numerous brands of insulin.

Juniper takes Humalog, because their insurance dictates they “can only have one type of insulin.”

“So that’s the one we use,” James Himes said.

Humalog has jumped 90 percent on the National Average Drug Acquisition Drug database. The Himes’ high deductible health care plan has put them on the front line of that price increase.

If she could ask insulin manufacturers one question, she said she’d ask a simple one.

“Is my daughter’s health worth that much more money to you?”

Dr. Irl Hirsch, an endocrinologist and professor at the University of Washington, has diabetes himself.
“I was diagnosed with type 1 diabetes when I was six,” he said.

A medical assistant holds an insulin pen administered to diabetes patients at a private clinic.&nbsp;

It puts him in the unique position of having a massive amount of empathy for the patients he sees.

“Some of them have to decide whether they’re going to pay their rent or pay for their insulin,” he said. “I think we have reached a breaking point.”

When asked if insulin deserves the same pricing scrutiny as the EpiPen, he can be quite blunt.

“It’s my feeling it deserves as much, if not more,” he said.

Insulin is not new. In 1921, a Canadian doctor by the name of Frederick Banting and a medical student named Charles Best removed the pancreas of a dog and soon thereafter discovered the dog’s blood sugar began to rise. Later, they injected a solution that contained ground-up pieces of another dog’s pancreas and injected it into a diabetic dog.

The following year, the team injected a more purified insulin into the body of 14-year old Leonard Thompson.

The boy’s strength quickly returned, and quickly the scientists were praised for their miracle drug.

By May 1922, Eli Lilly was brought onboard to help mass produce the insulin.

The patent rights went to the University of Toronto not long after. The three patent holders sold it to the university for a dollar a piece.

By 1982, the first rDNA insulin was mass marketed under the name Humulin.

In 2000, the Food and Drug Administration approved the first long-acting synthetic insulin.

Dr. Hirsch knows the improvements have made the administration of effective doses of insulin much better for diabetics, but he also knows they have come with a cost.

He said insulin, before potential rebates and insurance negotiations, can go from anywhere between $260 and $320 a vial.

“I now have patients who tell me they’re paying as much for their insulin than they are paying for their mortgage on their house,” he said.

Today, only three companies produce insulin for diabetics in the United States.

And yet, the minimal competition these three giants pose to each other does not appear to bring prices down. In fact, an analysis of monthly price increases from Symphony Health Solutions revealed that Novo Nordisk and Sanofi seemed to raise the prices of Levemir and Lantus in step with one another. 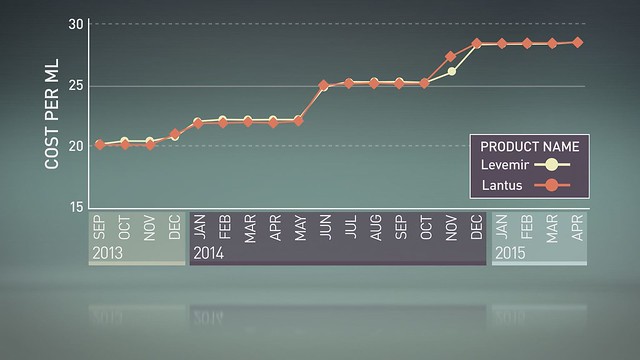 “There are no rules or regulations that prevent people from just continuing to see these prices go up,” said Ben Miller, the director of the Eugene S. Farley, Jr. Health Policy at the University of Colorado School of Medicine.

This picture shows an unit dedicated to the production of insulin pens.&nbsp;

“These are competitors and so we would expect them to lower price, but the reason that they are not is that they don’t have to,” Miller said. “If I raise my drug price and someone is still going to pay for that, why would my competitor not raise their price?”

Novo Nordisk, maker of Levemir and NovoLog, told us, “Our data show that a small (but growing) number of patients using Novo Nordisk medicines are in high-deductible plans are in the coverage gap.”

“Our Portfolio Savings Card Program allows eligible patients to patients to pay as little as $25 for a 30 day supply,” it continued.

Sanofi, the maker of Lantus, told us, “We have not increased the list price of Lantus since 2014.”

Eli Lilly did not respond to our request for comment.

A new biosimilar to Lantus known as Basaglar will finally hit the market next month. Basaglar’s manufacturer, Eli Lilly, gained preliminary approval for the product in 2014, but legal issues raised by Sanofi have helped keep the product off market until now.

Want to contact the author? Email Chris Vanderveen at chris@9news.com

“Outrage over price increases of the life-saving EpiPen that jumped up 600 percent since 2007 prompted investigators at TEGNA Media TV stations to research other drugs with skyrocketing prices. Our investigative team spent months compiling a list of 100 prescription drugs, both brand name and generics, that have seen price increase over the past four years of anywhere between 70 and 12,000 percent.

The average price increase of the drugs on the TEGNA Media list is 400 percent. Our investigators chose drugs that have been around for years, that treat a variety of diseases and many of which are life-saving medications. We used federal data compiled by the Centers for Medicare and Medicaid Services, called the National Average Drug Acquisition Cost (NADAC), to compile the list. More than half of the drugs on the list were FDA approved before 2002. At least a quarter of the drugs on our 100 list have been on the market for more than 25 years.”