'Sometimes the devil creeps in': Donald Davidson's confession tape is an unvarnished look at a brutal crime

The confession pinballs between descriptions of graphic violence and Donald Davidson's professed affection for his victims: "I love these people." 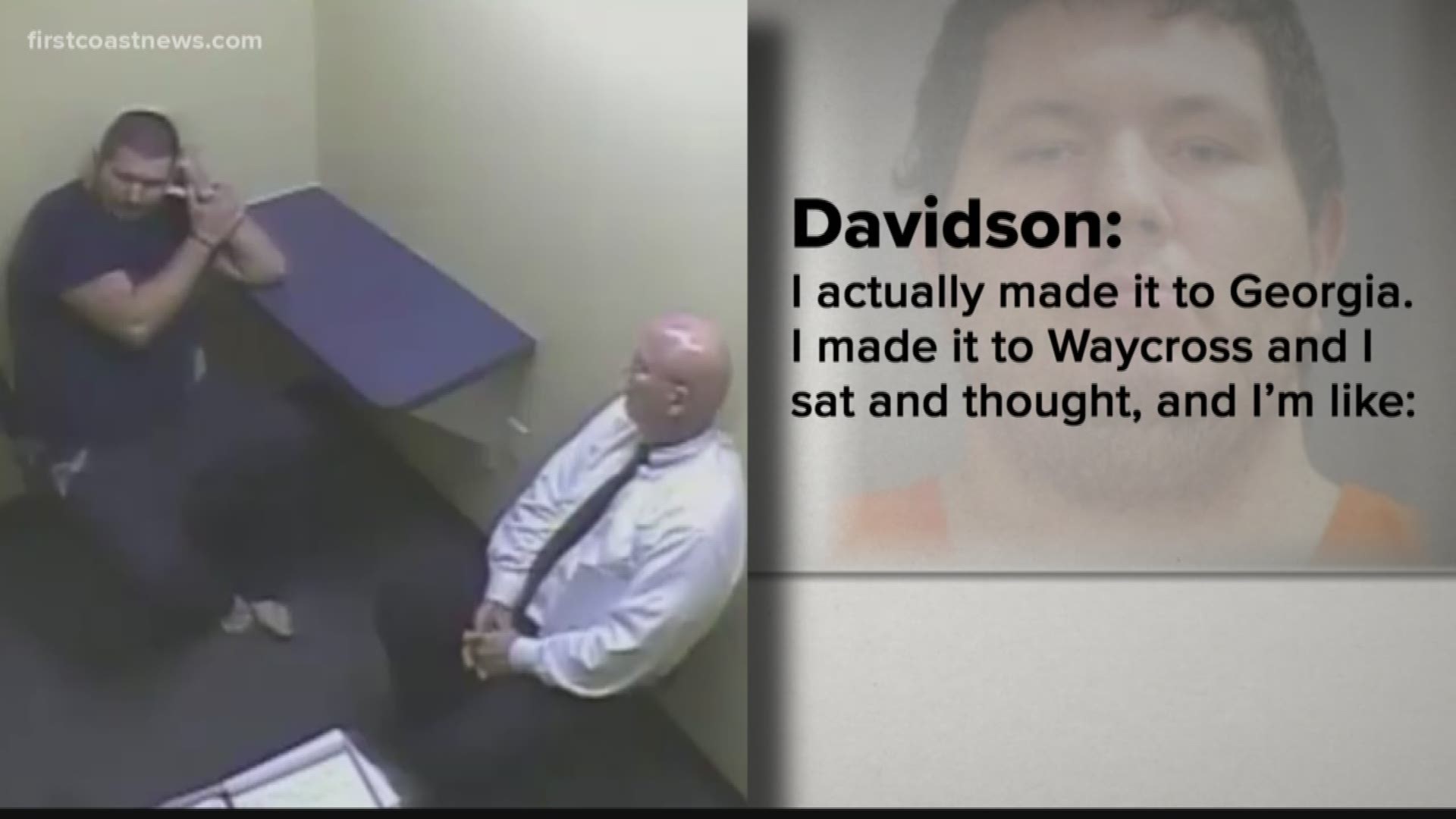 JACKSONVILLE, Fla. — A day after Donald Davidson was sentenced to death for a 2014 crime spree that included the sexual assault of a minor and the murder of a woman he describes as his “best friend’s girl," First Coast News obtained his videotaped confession.

Because Davidson pleaded guilty and did not testify during his trial, the confession tape is the first time his account of events has been available. Confessions are exempt from public disclosure while criminal cases are pending.

In the nearly three-hour interrogation by Clay County detectives, recorded hours after the attacks, Davidson confessed to the primary elements of his crime – strangling and stabbing 35-year-old Roseann Welsh to death, and kidnapping and sexually battering her 10-year-old daughter.

He said he was afraid of being caught and initially fled "like a scared rabbit," driving at speeds of 100 miles per hour, through rural North Florida and South Georgia.

“I actually made it to Georgia,” he tells detectives. “I made it to Waycross. And I sat and thought, and I’m like: I shouldn’t be running. You know what I mean? I did what I did. I’ll come back and turn myself in.”

Davidson was captured on Blanding Boulevard on Dec. 2, 2014, as he returned to Clay County.

“I knew exactly that I did something very, very wrong, and I was starting to feel compassion, and that’s when I come back," Davidson said. "I didn’t want to run from it.”

Davidson, who was already a registered sexual predator at the time of the attack, told detectives his decision to turn himself in, and perhaps even to commit his crime, stemmed from his inability to “live in the real world.”

He noted that he could no longer live at his home, because a bus stop had been built nearby, something prohibited by his sexual predator status. Instead, he was forced to rent, and could not earn enough to support himself and pay rent.

Davidson, who cut off his sexual predator ankle monitor as he was kidnapping his child victim, said he may have “subconsciously” done it, knowing it would immediately alert law enforcement.

He noted he had “a lot of rage and anger inside of me.”

Davidson said he ingested a large amounts of powered cocaine prior to the attack, which led to a kind of manic fugue. At one point, the officer asks how he used cocaine –  did he smoke, shoot or snort it? Davidson responds, “I eat it.”

Describing his crime, he seemed surprised by his lack of emotion, particularly since his victims were close friends, the wife and daughter of a man he described as his “best friend.” He noted he’s known Welsh’s husband since middle school.

He added, “I don’t understand why I did that to people I love.”

At one point, citing fatigue and hunger, Donaldson says he’d like some food. When asked by a detective what he wanted to eat, Davidson asked for “a double jalapeno burger.” The detective brings him a sausage breakfast sandwich from McDonald's noting it’s 5 am.

As the interview drags into the early morning hours, detectives are increasingly eager to wrap their investigation – but loose ends remain, including sex acts with his child victim that Davidson either does not recall or will not admit.

He offers to “say” whatever detectives want him to: “If it helps you for me to say that I did, I will.”

Detectives continue to press. “Are you remorseful for what happened? ... You can’t be remorseful for something you don’t remember,” they challenge. “What the hell happened?”

Donaldson, whose knuckles are tattooed with letters spelling out “Son of God," eventually confesses to everything.

“You see everything on me [tattoos] It’s all about God, right? But I still don’t show it sometime.”

The officer responds, “Sometimes the devil creeps in any way he can.”