She says her commitment to transparency is part of the reason she is no longer allowed to manage the dashboard. 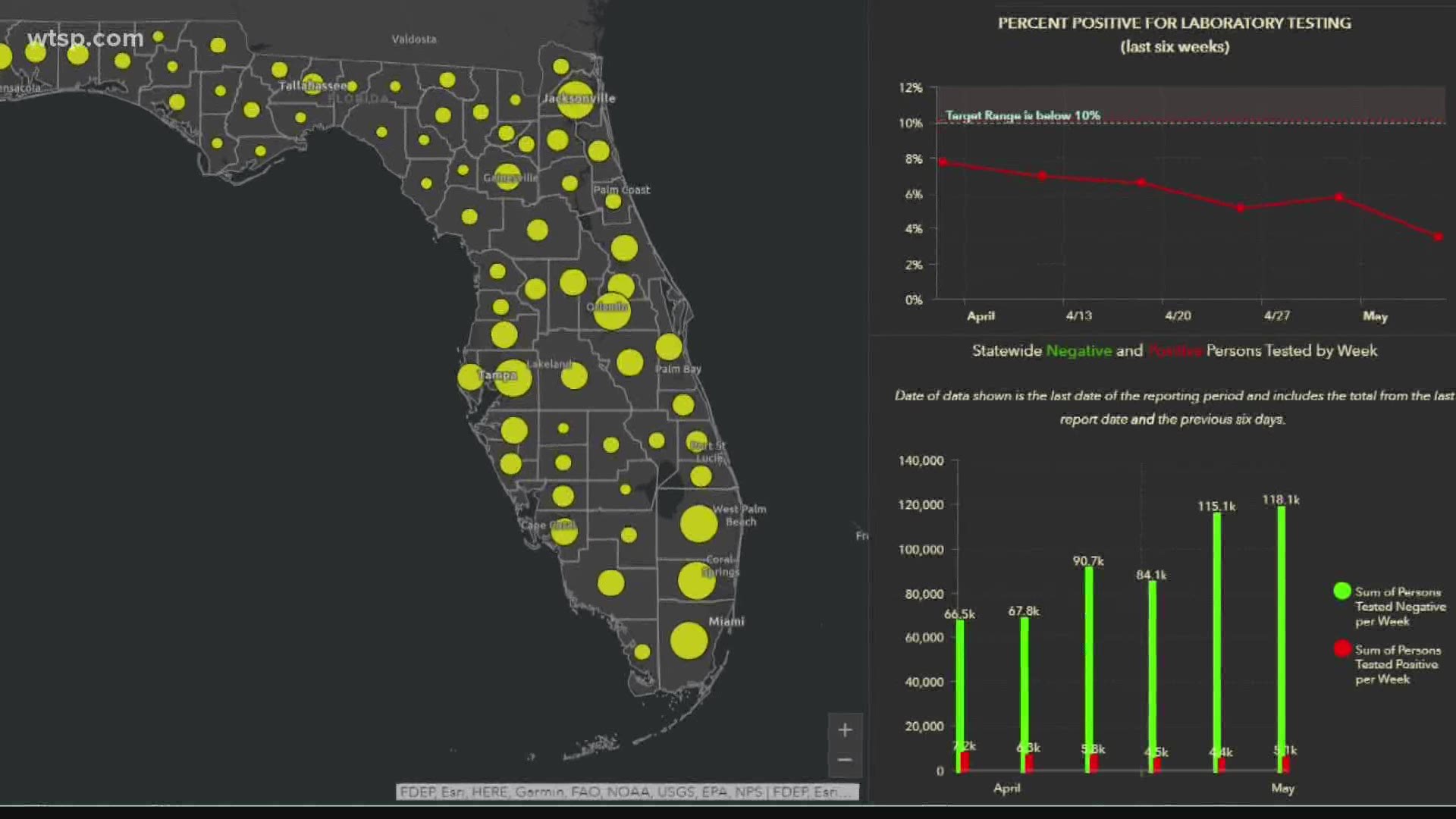 TAMPA, Fla. — Government and health leaders keep saying data is key to understanding the coronavirus. But, access to key information may be changing for Floridians. The person who has been an integral part of providing the latest data isn't doing it anymore -- and not by choice.

Gov. Ron DeSantis has told Floridians he was going to make "data-driven" decisions about reopening the state. His critics have been actively questioning whether the state has sufficient information to safely reopen.

But whether there's enough information or not, Florida has repeatedly pointed to its COVID-19 dashboard as the best place for people to see how well the state is flattening its curve. Government officials have touted the dashboard as being recognized by the White House as a model for other states.

Well now, the person who designed it has been removed from the project. And, the state says it will fire her if she doesn't resign before 5 p.m. on Thursday.

Rebekah Jones was responsible for publishing COVID-19 data to the dashboard and answering questions from the public. She created the system, which tracked cases, deaths and hospitalizations on a daily basis.

That all changed earlier this month when she says she was taken off the dashboard.

She announced the change in an email dated May 15. It was sent to a group of people who get coronavirus updates and obtained by 10Investigates through a source at USF Health.

RELATED: Some people are being removed from the state's coronavirus death list. We asked why.

In the email, Jones said she's heard from many people about the dashboard going down, data being hidden and functionality changing, so she wanted to "clear up the confusion." She said her office stopped maintaining the system on May 5 "for reasons beyond" their control.

"I am no longer involved in the publication of data, fixing errors, answering questions, etc., in any shape or form," Jones explained in the email. "I helped them get it back running a few times but I have no knowledge about their plans, what data they are now restricting, what data will be added and when, or any of that."

Jones said she had concerns about what she described as "dramatic changes" that have occurred, but she said she couldn't provide insight.

"As a word of caution, I would not expect the new team to continue the same level of accessibility and transparency that I made central to the process during the first two months. After all, my commitment to both is largely (arguably entirely) the reason I am no longer managing it," Jones wrote.

According to Jones, the state is making "a lot of changes" to how the data is presented.

"I would advise being diligent in your respective uses of this data," Jones wrote.

Jones had been a point of contact for 10Investigates after some discrepancies were popping up in the data being tracked daily.

On April 29, 10Investigates sent her specific pieces of data to look into. and she responded she was out of the office and would follow up with epi (epidemiology) when she returned. We did not hear from her again. Later that same day, a spokesperson from the Florida Department of Health responded to the same data inquiry we had sent Jones with this statement:

The Department’s commitment to transparency has been acknowledged throughout the nation. Our widely accessible and comprehensive data on the COVID-19 Surveillance Dashboard, has been recognized by the White House and Dr. Deborah Birx, Coronavirus Response Coordinator for the Trump Administration's White House Coronavirus Task Force. The State of Florida will continue to provide the most up-to-date information to arm Floridians with the tools and knowledge necessary to flatten the curve."

"It has come to my attention that Dr. Rebekah Jones, the state employee responsible for the DOH's COVID-19 dashboard, was not only involuntarily removed from her position after expressing concerns about an order she received to manipulate COVID-19 data, but was fired yesterday by the agency you oversee," Fried wrote in a letter to Gov. DeSantis.

"Rebekah Jones’ duties were to display data obtained by the Department’s epidemiological staff. The team that created the graphics on the dashboard, which was made up by multiple people, received data that was provided by subject matter experts, including Senior Epidemiologists, Surveillance Epidemiologists, and a Senior Database Analyst.

Rebekah Jones exhibited a repeated course of insubordination during her time with the Department, including her unilateral decisions to modify the Department’s COVID-19 dashboard without input or approval from the epidemiological team or her supervisors. The blatant disrespect for the professionals who were working around the clock to provide the important information for the COVID-19 website was harmful to the team.

Accuracy and transparency are always indispensable, especially during an unprecedented public health emergency such as COVID-19.  Having someone disruptive cannot be tolerated during this public pandemic, which led the Department to determine that it was best to terminate her employment."

Jones' Florida Department of Health email address is no longer active. Reached by personal email, Jones said she was not making a comment at this time.

A spokesperson for the governor's office told the Miami Herald that although Jones is no longer involved, the Department of Health's Geographic Information Systems office in which she had been working, continues to manage and update the dashboard.

Asked about the situation by a reporter during a news conference on Tuesday, Gov. DeSantis  described Jones' removal as a "non-issue." He read from an email he says Jones sent to her boss.

10Investigates has obtained a copy of that email. It was sent on May 16 from Jones to Craig Curry, director of IT for the Florida Department of Health. It says:

"So I sent an email to data users to tell them I'm off the dashboard, I can't answer their questions (aka please stop emailing me 24/7), gave them the info needed to get their API links fixed, etc., and now a reporter has called me asking why I'm not on it anymore. I said I'm not allowed to do interviews with the press. I said they've got a team working on it now, and that what I meant when I said don't expect the same level of accessibility is that they are busy and can't answer every single email they get right away, and that it was ridiculous that I managed to do it in the first place, and that I was tired and needed a break from working two months straight and am finally taking a vacation..

Is this one of those stupid things I should've have said? I sent this yesterday about the time my vpn/email got glitchy, but it looks like it wasn't actually sent until my passwords were reset... I have them the updated info and everything. I really don't want this to be a story, but this lady has called me like three times.

10Investigates spoke to Jay Wolfson, Dr.P.H., J.D. at USF Health. While he does not know the inside workings of this particular situation, he did say that he understands Jones is a highly certified architect of data.

Wolfson looks at the Florida Department of Health’s COVID-19 dashboard a few times a day and says data and transparency is key to understanding the coronavirus. We asked him about some of the comments made by Jones in her last email.

”The quality of those data the transparency of those data is incredibly important. I think Mrs. Jones was sharing her concern about those factors," Wolfson said.

"During our economic reopening the trust of private and public decision-makers - leaders of institutions, employers, parents - cannot be compromised," Sen. Rodríguez wrote in a statement.

You can read his full letter on Twitter by clicking here.