Officials with the Nassau County Building Department will meet with a contractor next week after a large portion of the first home in American Beach was torn down. 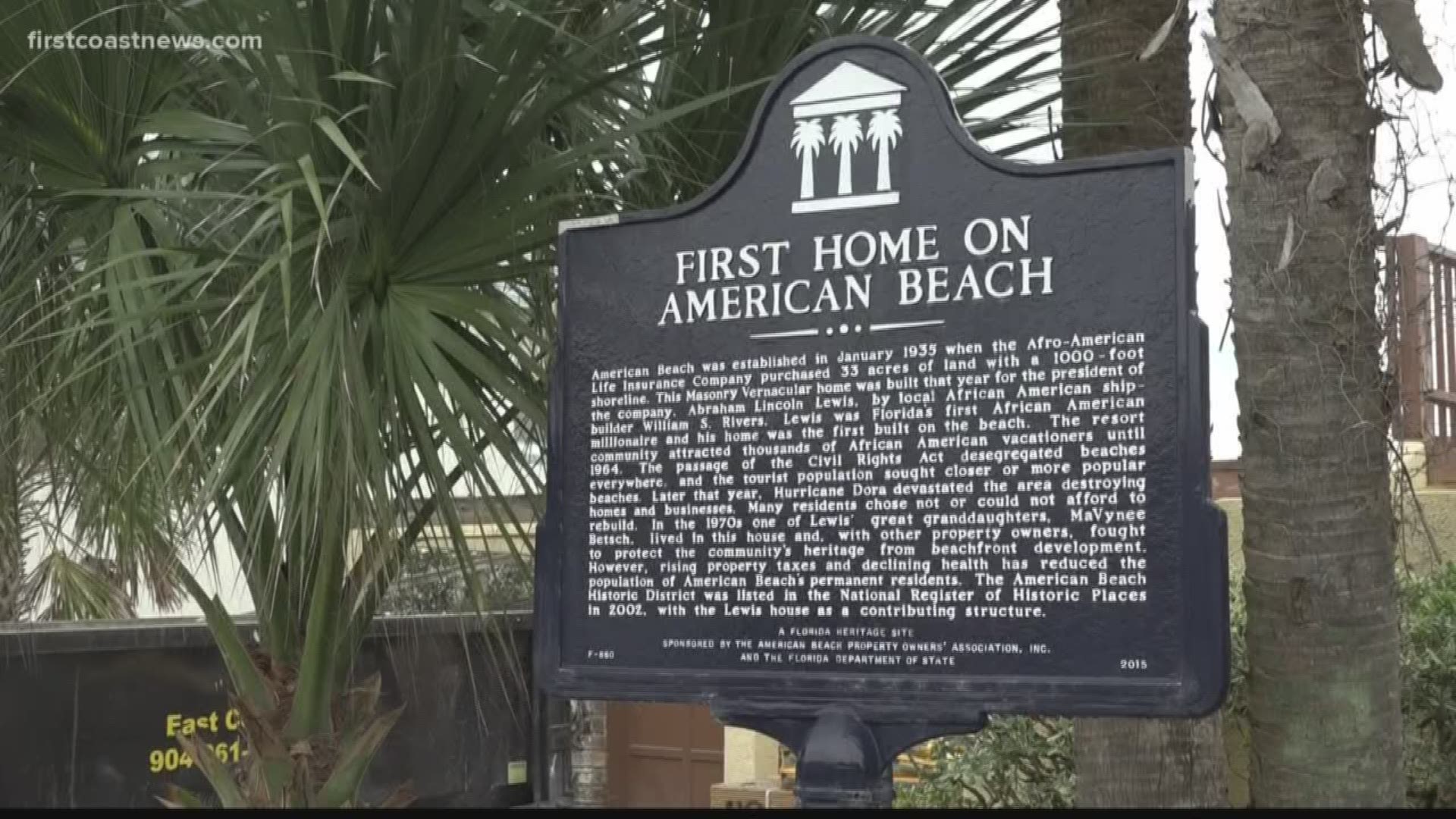 Little remains of a more than 80-year old historic African American home in American Beach after a partial demolition process tore down the upper floor, a move the owner said was needed due to a lack of structural integrity.

The home of Abraham L. Lewis was constructed in 1938 at 5466 Gregg Street, a beachfront road in the area that would become known as American Beach. Lewis, born in 1865, was one of the original founders of the beach community which would become a safe haven for African American beach-goers during segregation.

Lewis was an entrepreneur who founded the Afro-American Life Insurance company in Jacksonville. He was the state's first African American millionaire.

"Thank God for A.L. Lewis," said Marsha Dean Phelts, a longtime resident of American Beach. "He brought his people along with him. He shared his knowledge, he shared his wealth, he shared the wisdom and the dream. Without A.L. Lewis I wouldn't be standing up here now, lamenting the fact that his house is gone."

Phelts, like other American Beach residents, drove by the property Friday and stopped to take pictures of what was left. A historical marker signifying the importance of the site is planted in front of the structure.

"We don't own the property, it's privately owned and people have the right to do whatever they choose to do with the structure," Phelts said. "But here's this 85-year old house, you're going to knock it down and just move it off like it was never there? That really hurts."

First Coast News obtained a copy of the permit that was issued by Nassau County for renovation work to be done at the site. The permit was issued with the landowner listed as "Land Trust #4022," with an address in Jacksonville.

The permit documentation describes the scope of renovation work to be done as "repairs to existing single-family residence and selective remodeling and expansion to remaining structure." The estimated construction cost for the project is $72,000. 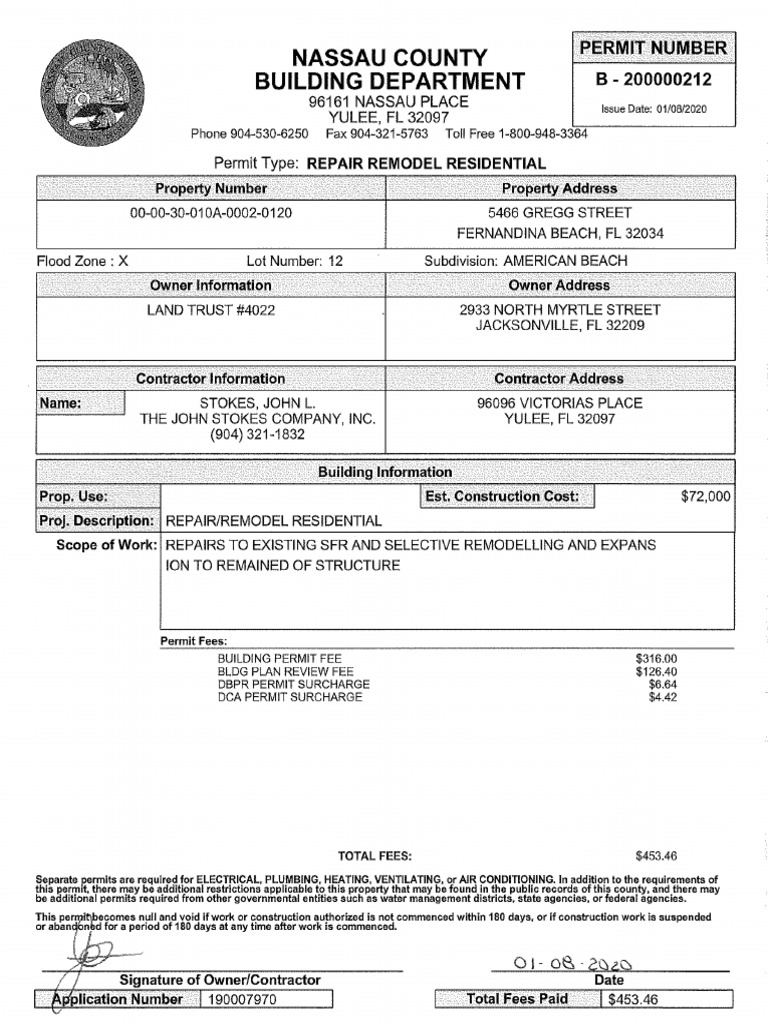 Contractor Permit for American Beach home
First Coast News obtained a copy of the permit that was issued by Nassau County for renovation work to be done at the site. The permit was issued with the landowner listed as "Land Trust #4022," with an address in Jacksonville.

A memo from the architect, Cotner Associates Inc. in Fernandina Beach, lists specific work as:

Besides the list of work to be done is a handwritten note by Keith Ellis, a building official with Nassau County. The note reads, "Also historical structure built in 1938, less than 50 percent code deficient. Items not included in 72k."

The architect calculated the renovation at costing about 48 percent of the value of the building, which the firm valued at 152,800 dollars.

Within the memo, architect John Cotner writes to the county, "I think this is an approach that can avoid demolition of this historically significant structure of note in the American Beach historic district."

After reaching out to the Nassau County Planning Department, Director Adrienne Burke wrote over email, "The project exceeded the scope as permitted. Keith Ellis is working on coordinating a meeting with the contractor, owner, etc."

While we were at the property Friday, contractor John Stokes arrived and spoke with First Coast News in person.

Stokes said that as work was being done on the home, significant rot was found in the walls of the upper level. He said the upper level and accompanying deck were not structurally sound, and that he and his team were following the design for the new home approved by the county.

Stokes added that he has been in touch with the county, and plans to meet with officials next week. He said the home could have been demolished totally, and that it was not protected with a historical designation.

First Coast News contacted the owner of the property, Tony Nelson. In a phone call, Nelson defended the construction on the home, saying that the home was not "demolished" and that he recognizes the historical significance of the property.

"We are restoring the home as close to what it was back in the day," Nelson, who is African American, said. "It's about trying to make it structurally sound, and it was not."

Nelson said he plans to move his family into the home once it is complete.

"It's a story that we are trying to continue and keep as we see American Beach changed," he said. "We're working hard not to lose the heritage of American Beach."

First Coast News has reached out to the Florida Division of Historical Resources for more background on the property and whether the historic designation of the site should have prevented what happened. 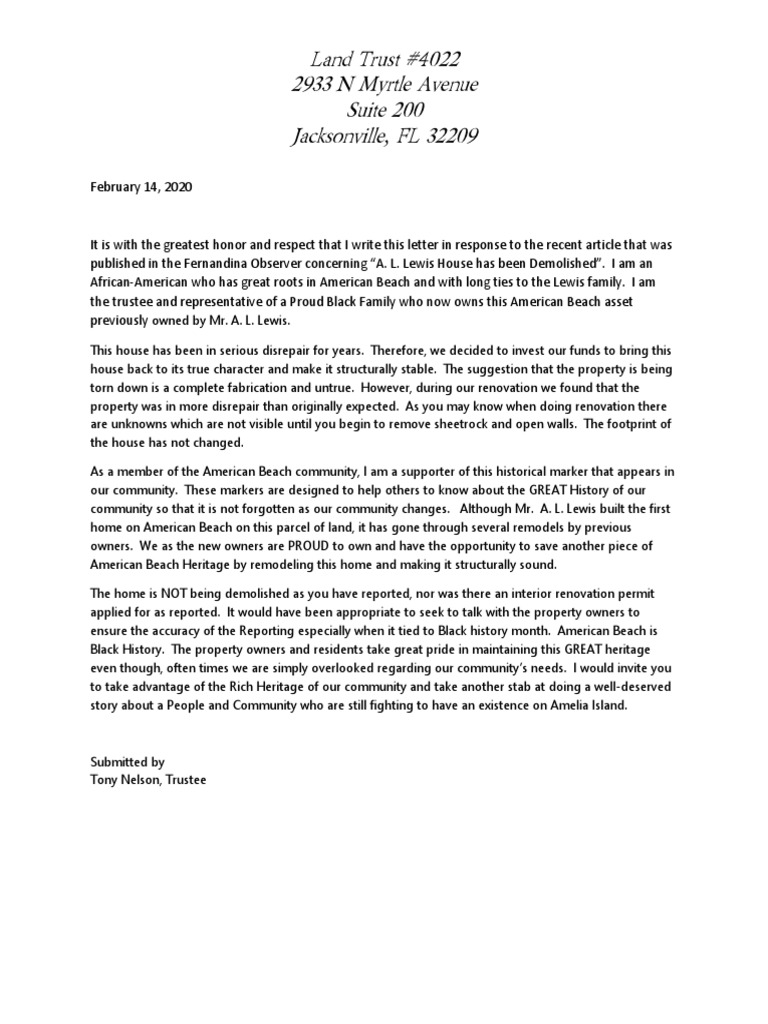