“Jacksonville has always had a problem telling its story,” says Tim Gilmore, who is nonetheless determined to tell it. 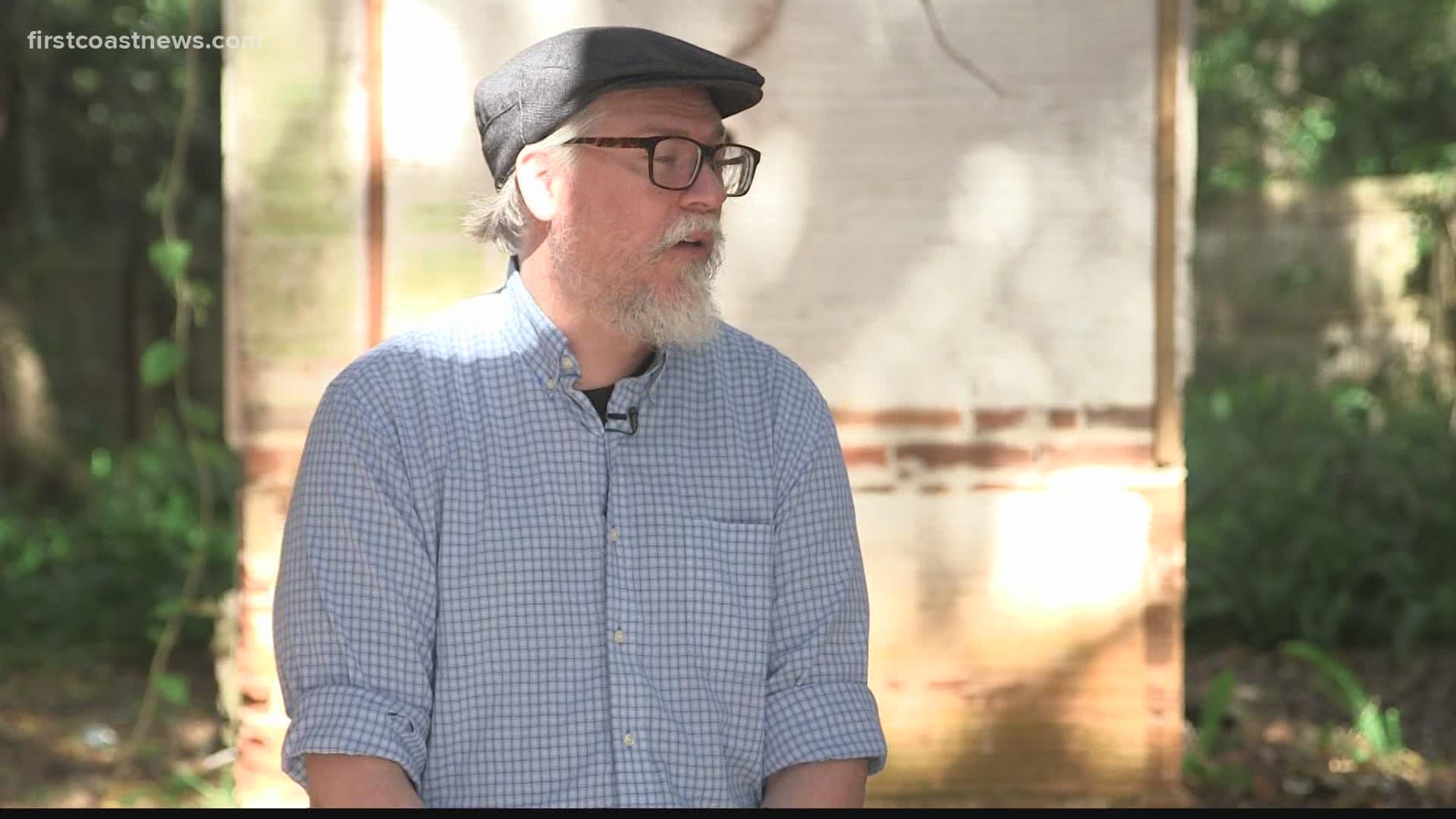 JACKSONVILLE, Fla. — The protests of the past week are forcing a lot of people to grapple with ugly truths, often for the first time.

One local blogger has been doing it for years.

Author and college professor Tim Gilmore has spent the past eight years searching out places and histories most of us don’t know exists -- and some we might prefer to remain hidden.

With each blog post, he tells the story of his hometown, mapping Jacksonville’s history one obscure narrative at a time.

“Jacksonville has always had a problem telling its story,” says Gilmore, seated in the gutted garage of the Moyer House, a seemingly haunted Mediterranean mansion just off Atlantic Boulevard (Oakhaven: Moyer House May 13, 2019).  “A lot of it’s pretty dark.”

Like a lot of the places he explores, the Moyer House is hidden in plain sight, just yards away from buzzing, oblivious motorists. Author of the blog JaxPsychoGeo, Gilmore seeks out these places – offbeat, occasionally off-putting.

Gilmore is Jacksonville born and bred, with indigenous knowledge of local lore, but without the tender antennae that cause natives to shrink from the truth.

“I want to be true to what this town is,” he says. “There’s a lot of dark stuff to this city.”

Raised in a deeply fundamentalist Christian household, Gilmore began writing at age eight. He started to peel back the scrim of credulity a few years later when his mother was diagnosed with ALS.

“She died when I was 12, and at that particular age, right before adolescence, you're already kind of shifting the world around and seeing what's what,” he says. “Everything, including the worldview that had seemed to be unquestionable, was turned on its head.”

He reached a second psychological milestone following revelations that the Reverend Robert Gray, founder of Trinity Christian Academy and Trinity Rescue Mission, had been sexually abusing children in his church for 50 years.

Gilmore never attended the church, but he did attend the school. “He was a Titan,” he says. “He was an incredibly respected, revered, almost worshipped kind of individual. It's hard to get that kind of story out of your DNA.”

Gilmore ended up writing a book about it, “Devil in the Baptist Church: Bob Gray's Unholy Trinity,” one of 19 books he’s written, in addition to his blog. While the website focuses on places (and their inhabitants), his books are centered on people -- including “The Book of Isaiah," about the city’s founder.

“Isaiah Hart founded the city, made his wealth cattle rustling but also kidnapping and reselling slaves,” says Gilmore. “And we have a bridge named after him! That’s part of the city. You can’t be honest and talk about Jacksonville and not talk about these things.”

Gilmore approaches buildings almost like a biographer, delving into history and character. Wandering through one of the chilly coquina cottages of Coquina Gates in Arlington (Coquina Gates: 1, Wild Cherry  March 11, 2017), he observes the pecky cypress trim and a massive, salvaged barn door. The builder, Jim Russell, “learned his trade from building vaudeville sets,” he explains, building the series of homes over 24 years.

“There were seven of them. Then one burned down a number of years ago. So there's six,” he says. “There's nothing else like them anywhere, you know? You kind of feel like being in here, like, this thing is going to be here in 1,000 years if nobody tears it down.”

“The thing I love most is when people tell me it’s like a wormhole,” he says.  “That’s the best feedback in the world. That’s what I hope happens.”

He likes to think of his blog as a literary companion to Jacksonville, but also a way to help the city reckon with its past.

“It’s always still connected, it’s always right under the surface,” he says of Jacksonville’s history. “We have to be honest if we ever want to get better. And also -- those stories are interesting.”