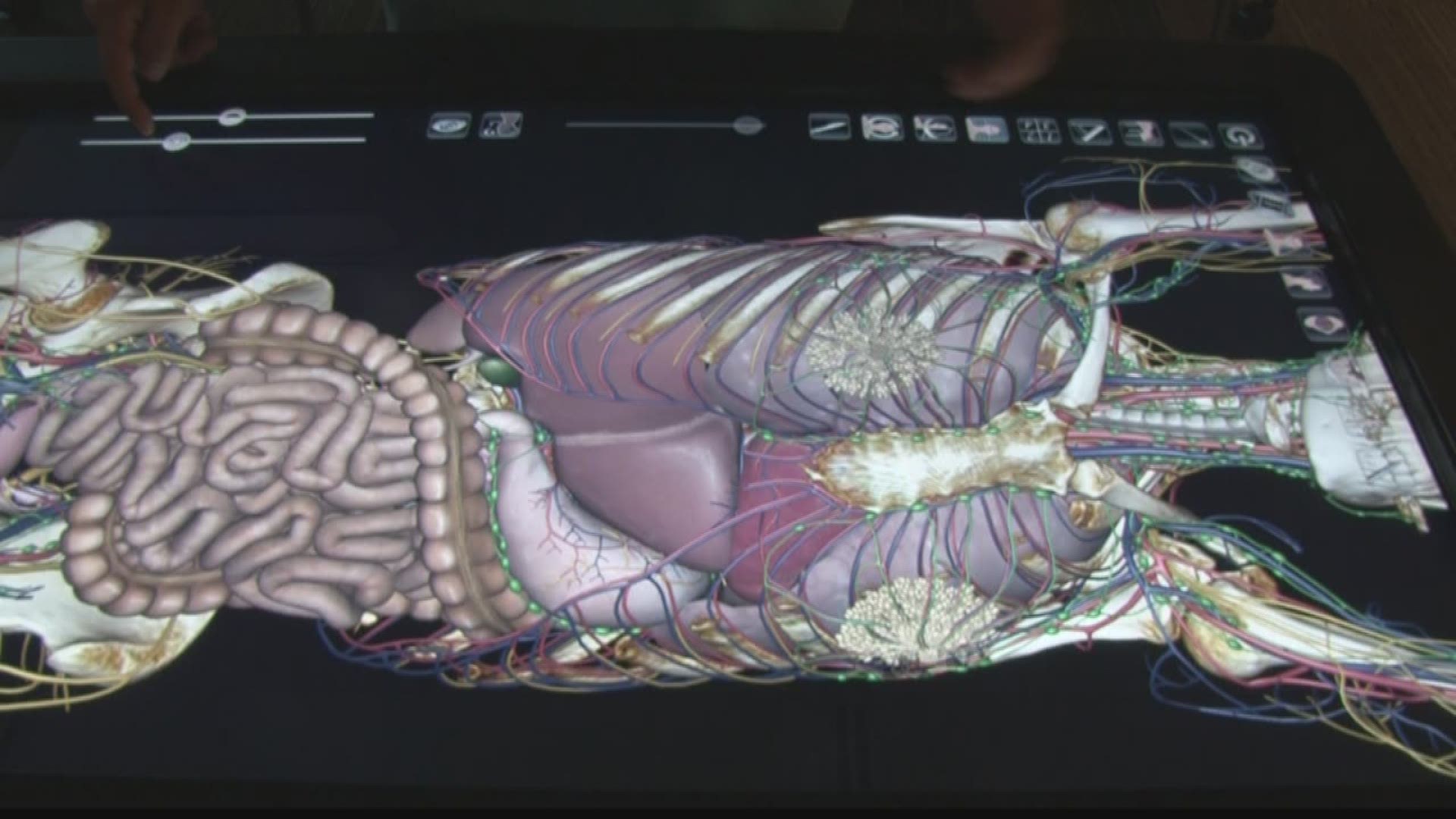 JACKSONVILLE, Fla. - Imagine if you needed surgery. Now imagine your doctor can map out that strategy using a virtual projection of your body in three dimensions.

Now, imagine that your surgeon can view your body from any angle and any cross section, including or excluding skin, nerves, veins, arteries, lymphatic structures, bones -- all with the push of virtual buttons.

It not something out of the latest Sci-Fi film, but real technology at Mayo Clinic Jacksonville, thanks to a high-tech table called Anatomage, a contraction of the words "anatomy" and "image".

"It takes two-dimensional images, compiles them, and gives us a three-dimensionality," Dr. John Casler tells First Coast News, explaining that the images are derived from conventional MRIs or CT scans, but leveraged to strategize surgeries with unprecedented flexibility.

"Every operation is kind of like planning for battle," he continues, "and every field commander has to be aware of the terrain."

It's hard to imagine any tool providing a better field map, so to speak, before that battle. Dr. Casler, a head and neck specialist, says Anatomage has been particularly helpful with about three-dozen surgeries - many of them tumor removals - at Mayo Jacksonville, the first facility worldwide to take the table's use beyond anatomical training to actual surgery stealth.

"The Anatomage table allows you to scope out the terrain so you have a perfect idea of what the terrain will be like, what the anatomy will be like before you ever make an incision," Casler says. "Every tumor makes every patient a little bit different; there are almost no two tumors that are alike."

Or situated in precisely the same place. Dr. Casler and technician Conrad Dove explain that tumors can embed themselves amid vital tissue and organs. Anatomage helps them find a path to otherwise seemingly unreachable tumors, and/or devise a more favorable path than would have been attempted without the technology's help.

"For lack of a better term, it's a no-brainer to use this for brain surgery," Dove quips. Having worked with Anatomage since its arrival three years ago, Dove has served as right hand to doctors, helping them navigate its vast functionality.

The preferred view, as Dove explains, can depend on the situation. He talks of a woman in Mexico who had been suffering a peculiar problem for years.

"When she turned her head a specific direction and looked over her shoulder and up, she would pass out," he relates.

"Anatomage revealed a floating bone chip that, when she did that, would pinch an artery to her brain," he continues. "We just kind of looked at each other and said 'There it is, can it be this simple?! And it was'."

That tale reveals yet another versatility:: Anatomage can upload data sent from anywhere in the world.

Another notable case is patient Chad Thompson, who in 2016 had a golfball-sized tumor lying at the base of his skull and putting pressure on his brain. Thompson had already had previous surgery, which presented the added challenge of scar tissue to get around.

"We needed to know that we could develop an approach that wouldn't mutilate him, yet would allow us to successfully access the tumor," Dr. Casler says.

In fact, the initial thought was to reach the mass in Thompson's head from the top of his skull or by removing his lower jaw - either of which would very possibly have left the 40-year-old husband and father disfigured for life. Just days before the scheduled procedure, Dr. Casler - aided by Anatomage - found an alternative route.

"If you think about putting a probe past the cheekbone until you hit the base of the skull, the center of the skull, thats' where his tumor was," Casler says, describing a strategy that included incisions under Thompson's upper lip and inside his nose, lifting skin off his mid-face, and cutting in to the bone of his skull.

As invasive as that might sound, Thompson himself, who has since moved out-of-state, tells First Coast News the new angle of attack made his surgery "almost a non-event".

In a post-operation video that Mayo has posted on its Facebook page, Thompson - along with Dr. Casler and Conrad Dove - recap his story.

"A lot of friends and family came to see me in the hospital," Thompson says in the video, "and even afterward, they actually asked me, 'Did you have the procedure?' I said yeah!"

Indeed, photo and video of Thompson reveal no conspicuous signs of his surgery, either in facial structure or his speech.

"We didn't destroy any critical normal structures that we might have if we didn't know that this would work," Dr. Casler tells First Coast News.

Casler says the older technologies that serve Anatomage - MRIs and CT scans - still provide great value on their own, but Anatomage takes everything to a greater level.

"I mean, this is great - don't get me wrong," he says, gesturing to one of Thompson's MRI scans, "but this is better."

Perhaps best of all, the Anatomage table at Mayo, normally costing about $100,000, was funded by a private donation, and so far Mayo has been able to provide its benefits, as needed, at no additional cost to the patient.