Sepsis survivor: By all rights, I shouldn’t be here

A Florida man who survived the potentially life-threatening condition, sepsis, is looking forward to the future thanks to the doctors and technology that saved his life. 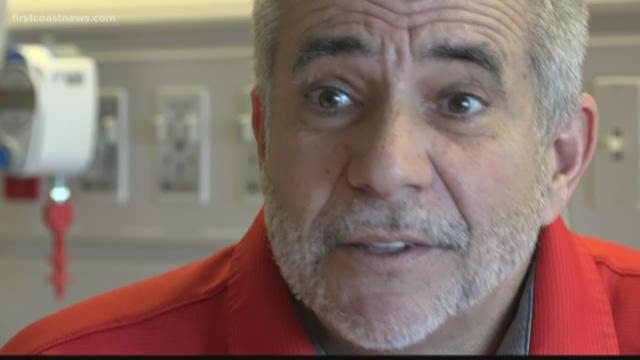 JACKSONVILLE, Fla. -- A Florida man who survived the potentially life-threatening condition, sepsis, is looking forward to the future thanks to the doctors and technology that saved his life.

“I’m blessed, I don’t know how else to describe it,” Kronmiller said.

It has been four years since his brush with death. The journey to that point, however, started when Kronmiller was just 22 years old and diagnosed with an autoimmune liver disease.

“[Doctors told me] within five years I’d either have a liver transplant or I would … I’d pass away,” he said.

Kronmiller stretched those five years into nearly 30. He got a new liver at the Mayo Clinic when he was 50 and immediately felt better.

“It was crazy that after that long of a surgery and all that I’d been through with it that I actually could feel like I was better that quick,” he said.

Kronmiller was on the road to recovery, staying at housing on the Mayo Clinic campus. But he was about to hit a major speed bump.

“Thinking that I was gonna be fine and then being brought to my knees again saying 'hey, you might not make it,'” he said. “That was actually rougher that time.”

About a week after he was discharged, Kronmiller was overcome with pain.

“I just felt like I got ran over. And I’m assuming that was the beginning of the sepsis,” he said. “It got to where it hurt so bad and I was just so miserable and weak that I just didn’t want to move. And if my wife hadn’t dragged me to the hospital I wouldn’t have made it.”

Sepsis is caused by an overwhelming immune response to infection. It kills about 250,000 Americans each year, according to the CDC.

“It could escalate in a matter of hours, unfortunately,” Dr. Pablo Moreno Franco, a critical care physician at Mayo Clinic said.

Dr. Moreno said sepsis has different levels, the most serious of which can cause organ failure and even death. That’s why catching it early is critical.

“Time is of the essence,” he said.

Traditionally, it’s up to physicians to recognize whether a patient could be septic and assess and treat them accordingly.

“And that, in a very busy emergency department situation, is risky,” Dr. Moreno said. “Because they could get sidetracked with other things and forget to think about sepsis. Or by the time they recognize it, it’s too late.”

A tool at the Mayo Clinic takes out the human factor. The AWARE system automatically monitors patients for signs of sepsis. If certain criteria are met, an alert is sent out and a team immediately responds.

“I could see where it might be difficult to figure out what was wrong,” Kronmiller said. “Because I had just had a transplant with some complications, and now I had abdominal pain, severe abdominal pain. So that’s where I would think you would look first, if there was something there.”

But thanks to quick action, Kronmiller was back with his family weeks later. And now he’s savoring every moment with his daughter, son and wife.

“Like it’s extra innings,” he said. “The game was over but they said ‘oh no, let’s play a while longer.’”