When will DC, Maryland & Virginia reopen? Their epidemic curves can tell us

D.C. and Maryland need a 14-day downward trend in new cases to reopen. Virginia needs the same trend in the percentage of positive cases. How close are they? 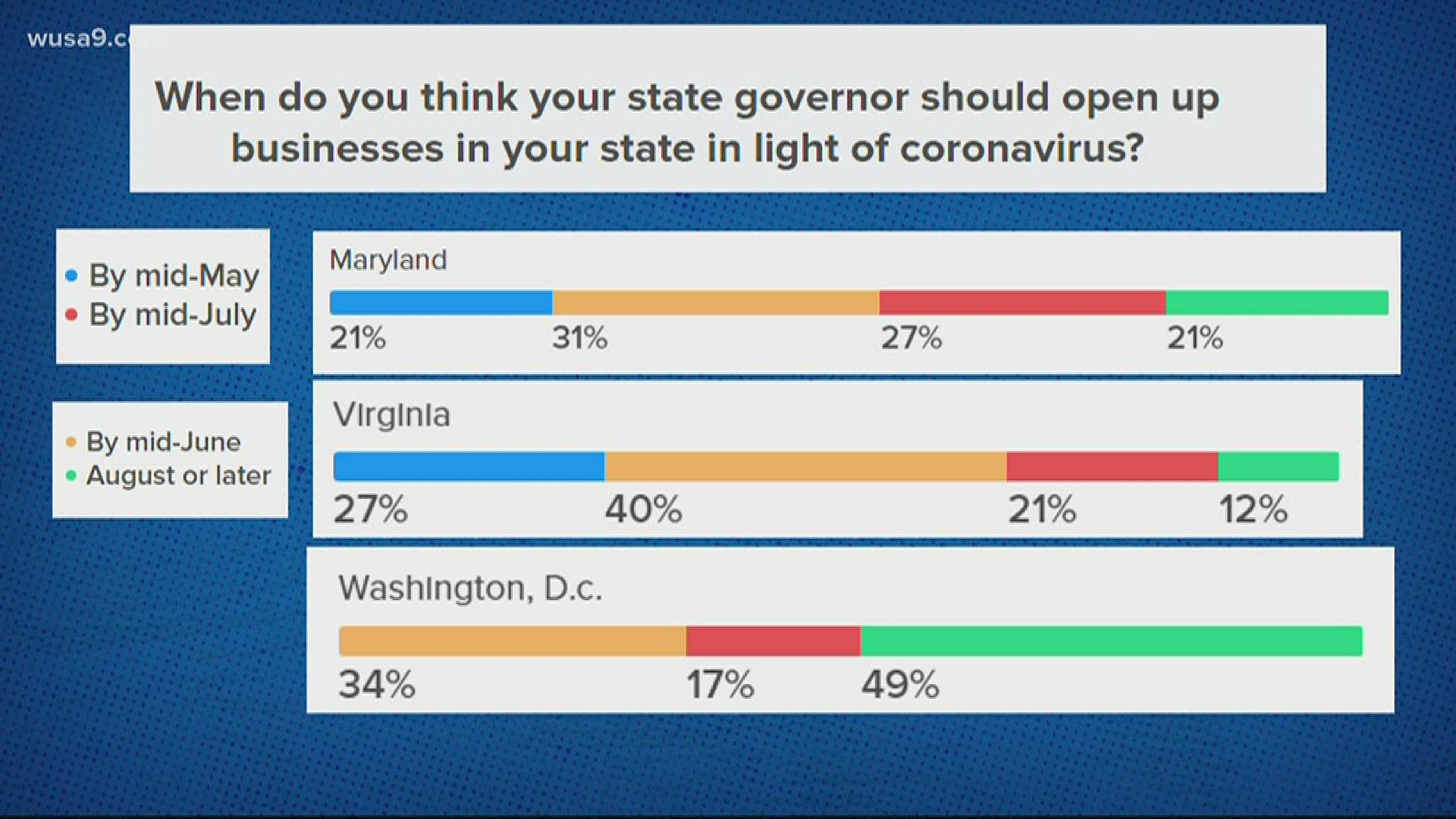 WASHINGTON — Fourteen days of consistent downward trend in coronavirus cases, hospitalizations and/or the percentage of tests that come back positive  – that’s what D.C., Maryland and Virginia all need to begin their reopening plans.

It’s the same criteria included in the White House’s “Opening Up America Again” plan. It’s based in part on the coronavirus’ up-to-14-day incubation period.

But with new case numbers still seeming to move erratically – some days much larger than normal, others a smaller increase – what does that mean?

To help visualize it, WUSA9 generated a seven-day moving average for D.C., Maryland and Virginia and plotted it over the new cases reported in each jurisdiction since the first DMV case was reported on March 5.

What that does is allows you to visually see the “epidemic curve,” and the direction each line is trending. Once the trend line starts heading toward the bottom of the below graph, that's when we're headed toward reopening.

Number of days in decline: 0

After three days of decline at the end of April, D.C.'s case numbers began increasing again, with the city reporting its highest single-day number to date on May 4, and then its second highest on May 8.

D.C. Mayor Muriel Bowser said May 8 that the original target reopening date of May 15 is not looking likely.

While the District has made improvements in PPE and hospital capacity, officials are waiting on finalizing reopening plans. Bowser said she will work with her advisory board and health officials to decide when that official date will be, sharing a briefing with the decision won't be available until after May 15.

Stay-at-home order expires: Until further notice (no date given)

Number of days in decline: 0

Maryland, where daily case numbers had been flat during mid-April, has seen a steady increasing trend since April 22.

Maryland has, nevertheless, begun to reopen some things on a limited basis, including barbershops, state parks and elective surgeries.

Number of days in decline: 2
Days of Positive Percentage Decline: 17

Virginia is unique in the DMV in that its phase one reopening requires a 14-day downtrend in the percentage of COVID-19 tests that are positive. As the Virginia Department of Health said in a press conference on May 4, that number has been in decline since April 21.

However, this decline comes even as daily new case counts in Virginia continue to rise. This is a function primarily of the Commonwealth significantly expanding its daily testing numbers.

In good news for Virginia, as of May 8, the commonwealth's coronavirus doubling time – the time it takes for the total number of COVID-19 cases in the state to double – had slowed to be on par with Maryland, after lagging behind the rest of the DMV for weeks.

You can find more information about each jurisdiction’s reopening plans, and the milestones they need to hit to begin them, below:

RELATED: If stay-at-home orders were lifted tomorrow, would you go out? Travel?

RELATED: If we keep it up, here's when we could start reopening things