Colonel Dean Biggerstaff, 84, says being apart from his wife of 61 years amid the pandemic has felt like torture. 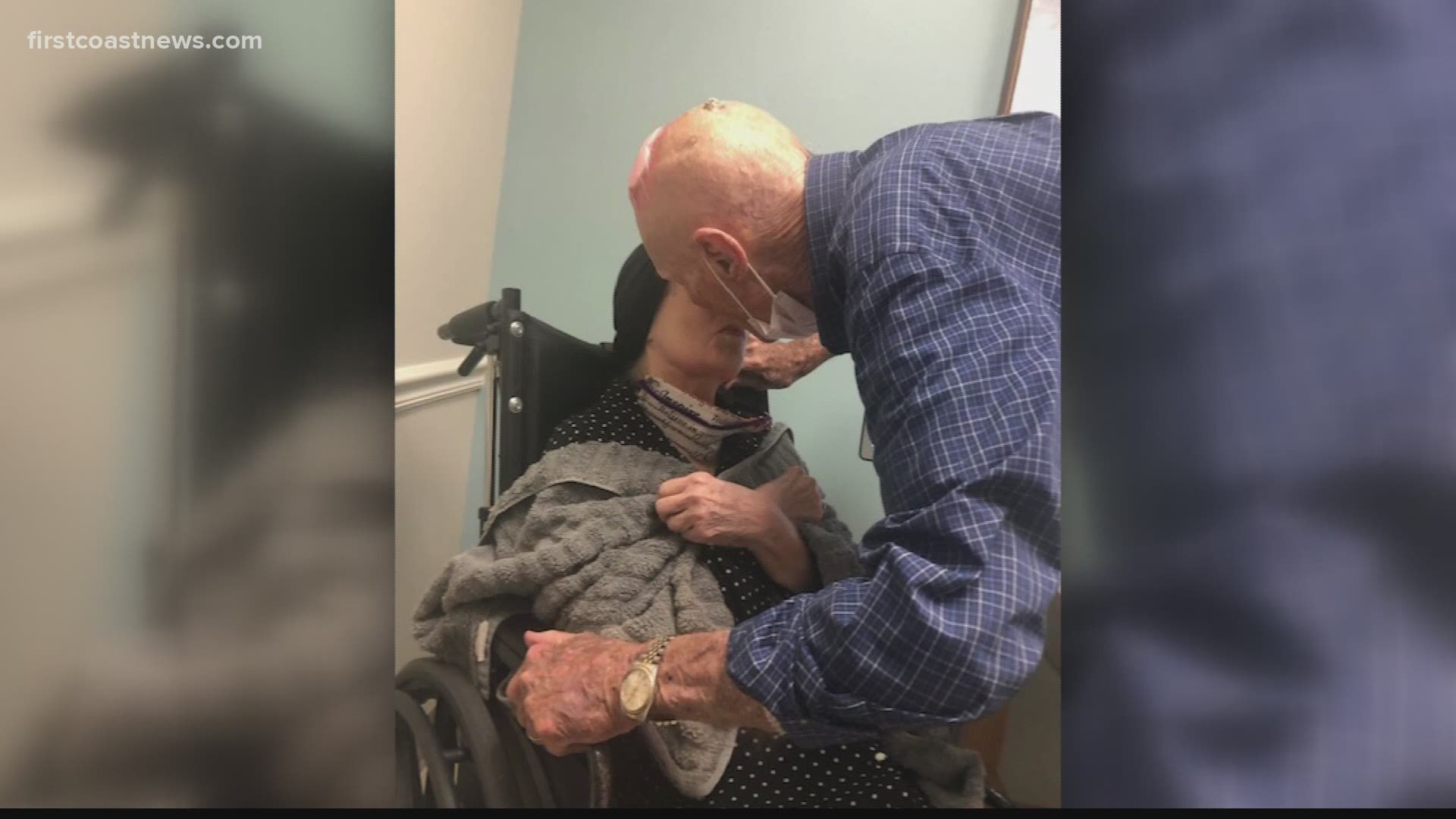 JACKSONVILLE, Fla — A United States Air Force veteran and his wife who have been married 61 years were separated due to nursing home restriction amid the pandemic. Those restrictions were eased in Florida on Sept. 1, allowing the pair to once again embrace.

"The first thing reported was that you bent down and gave mom a big kiss," said Cindi Luten as she smiled while sitting next to her 84-year-old father.

“She better look out next time,” responded Colonel Dean Biggerstaff.

He and his wife, Inez Biggerstaff had been apart since March 15.

"When I wake up in the morning my first inclination is to get up and go see my wife," Biggerstaff said. "It's an absence that's hard to adjust to."

Prior to the pandemic, he visited his wife twice a day at her nursing home, feeding Mrs. Biggerstaff breakfast and lunch.

"You miss each other," Biggetstaff explained. "You miss the simple things that you used to take for granted. Holding a hand, a kiss."

He's lost 30 pounds over the past six months and suffered a head injury after recently falling. Luten says she can see her father getting weaker and his health failing since being separated from his wife.

"Just yesterday dad went back to the facility," Luten said. "He forgot that he wasn't allowed to see her."

The state has eased nursing home restrictions, but there are still many barriers in place aiming to keep Luten's 81-year old-mother safe.

As outlined in the state's rules, Biggerstaff passed a test to become a Compassionate Care visitor for his wife, allowing him a short visit.

"I didn't want to leave after being there for such a short period of time and after working so hard to get there," Biggerstaff said. "But rules are rules and I have to obey them if I want to continue seeing her. So I reluctantly obey."

He says his beautiful wife looked like a million dollars when he was finally able to see her and it's a visit he'll cherish until the next.

"I hold on to everything and every memory I can over the years and you can't forget that type of activity and it just stays embedded in your subconscious," Biggerstaff said. "That keeps me going and I'm sure it keeps her going."

Luten also took the test to become a Compassionate Care visitor. The state's rules do not state how long or when she can visit. She says her mother's facility gave both her and her father just 30 minutes each.

Mrs. Biggerstaff has a brain injury. She can't see out of one eye and doesn't hear well, so FaceTime and phone calls don't work. Luten says the short nursing home visits for now are all they have.