Hundreds of people waited hours for their first dose of the COVID-19 vaccine. 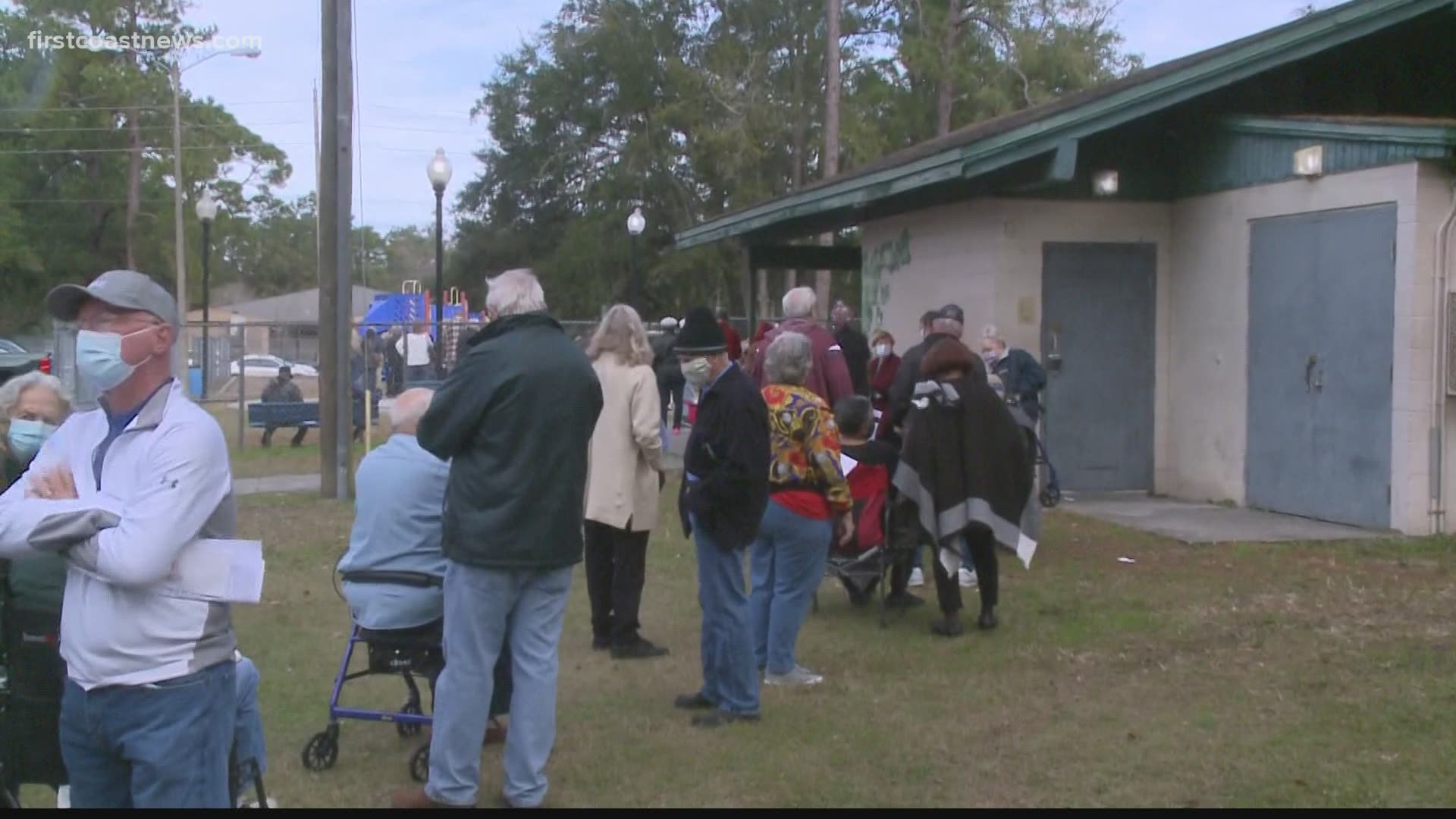 JACKSONVILLE, Fla — Before sunrise, many people lined up outside the Lane Wiley Center on the Westside, although officials encouraged the public to wait until an hour before vaccines started.

The line stretched into the nearby Lane Wiley playground, and many were questioning if the city could have rolled out the vaccines more efficiently.

Several people stood, many brought folding chairs, books and newspapers to wait for the vaccine.

City staff handed out blue tickets—which might as well be golden—to seniors getting the COVID-19 vaccine.

Lorenzo Hamilton, a 73-year-old Navy veteran who served in Vietnam, waited in line with his wife, Janice.

“It’s freedom, freedom to go out. We’re stuck at home except for getting something to eat,” Hamilton said.

He’s a diabetic and can’t get around easily. Without a chair he wouldn’t be here, he says.

I’m here at the Lane Wiley Senior Center where many are lining up for their COVID-19 vaccine. Here’s a quick time lapse of the line around 10:15 this morning, which extends into the nearby park. Inoculations start at 11:00 @FCN2go pic.twitter.com/wONSpcBJlB

“Somebody could’ve planned this a lot better you would think. Especially for people this age. How can you expect people to stand for three to four hours? It’s ridiculous,” Hamilton said.

Hilda Nettles from the Westside was excited to get the vaccine and is staying strong on her feet.

“I’m not afraid of things, but I want to be safe. I want to live as long as I can and enjoy what I can, so this will free me,” Nettles said.

Nettles misses the social interaction. She said she exercises on Zoom twice a week to stay in shape.

She’s weighed the pros and cons of getting the vaccine—but is going with what’s best for all.

“It may or may not work for me, but whichever way it goes is okay because we all have to join in to figure out what will work,” Nettles said.

There were 475 doses available for Monday given to seniors. Ten vaccinator lanes were set up inside the building. Up to 10 people could be vaccinated at a time and monitored for 15 to 30 minutes after the inoculations.

The vouchers handed out to people in line must be used the same day to get the vaccine, according to the City of Jacksonville.

If a person with a voucher returns by 6 p.m. to their location, they can get the vaccine, city staff say.

The goal is to administer 475 doses each day at the Lane Wiley Senior Center, with the leftover vaccine rolling over to the next day.

After five hours in line – Ronnie Pittman from Baldwin got his shot. He was the fifth man in line—looking forward to simpler times.

“We’ve just been staying in and going to the bank and the grocery store, so I’ll be glad when everything gets back to normal,” Pittman said.

The city is telling people to arrive on a day corresponding to their birth month. People born in March and April are encouraged to line up starting at 10 a.m. on Tuesday. A city spokesperson tells First Coast News that starting Tuesday, JSO will be enforcing the rules that no one will be allowed to line up before 10 a.m. to ensure the vaccine rollout is as efficient as possible.