Florida has distributed about 50 percent of its vaccine supply, White House says

Press secretary Jen Psaki responded to Gov. Ron DeSantis' criticism of a federal approach to vaccine distribution and his call for more vaccines needed in the state. 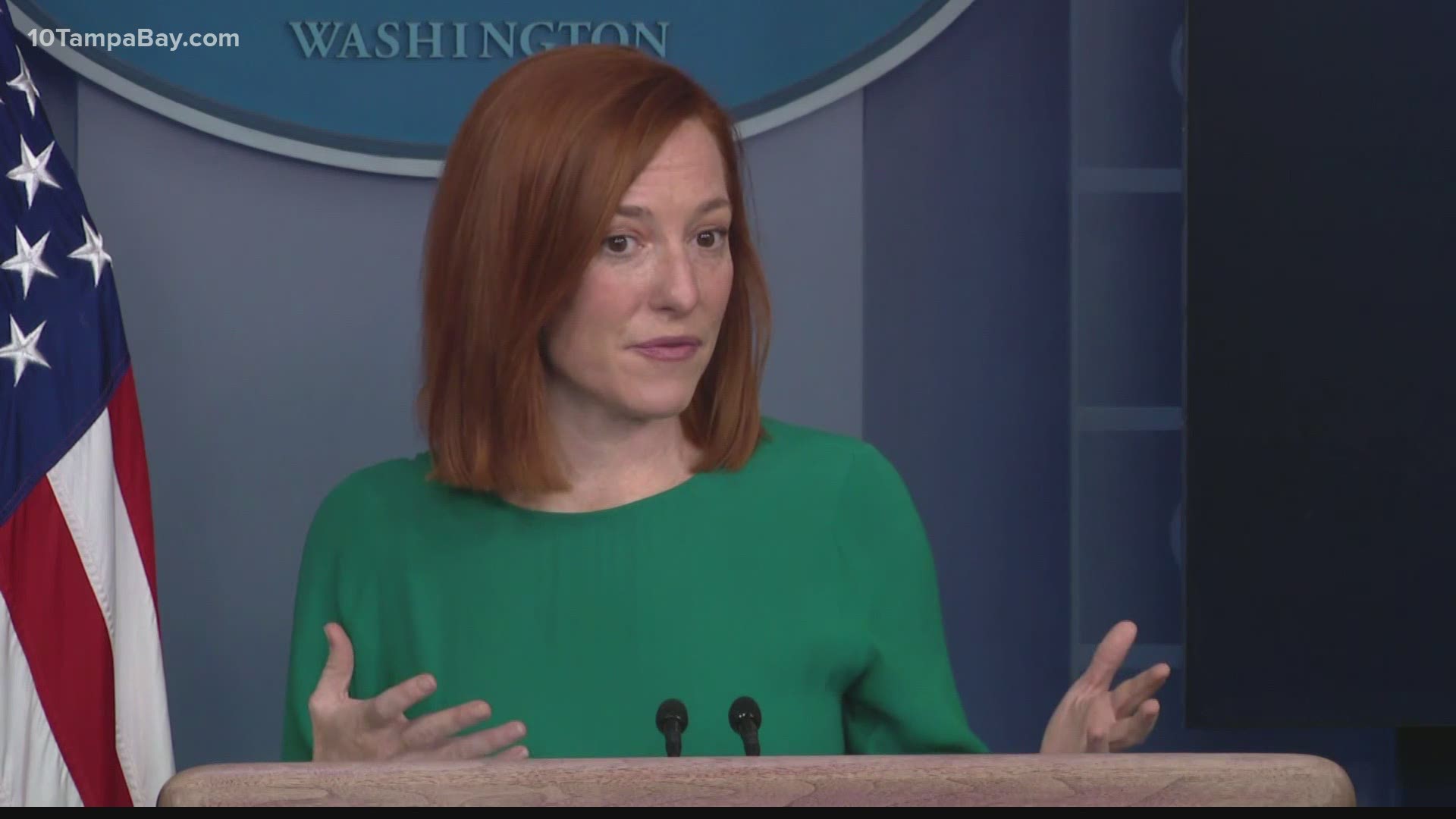 WASHINGTON — The state of Florida has "a good deal of the vaccine" remaining in its supply, President Joe Biden's press secretary said Monday, responding to a question about the governor criticizing federal efforts to distribute COVID-19 vaccines.

Biden recently announced a national strategy to combat the coronavirus pandemic. As part of it, the Federal Emergency Management Agency, or FEMA, is tasked with managing the set-up and operations of community vaccination centers across the country.

By late February, according to the plan, 100 such sites would be in operation -- including Florida. Gov. Ron DeSantis thinks Florida doesn't need one, "totally unnecessary," he said last week.

"First of all that would take forever to do, you're adding more layers of bureaucracy. The only thing the federal government should be worried about right now is increasing the vaccine shipments," DeSantis said.

White House press secretary Jen Psaki pushed back, saying the state has only used about half of its vaccine supply distributed by the federal government. There have been 2,908,275 doses distributed to the state, according to the Centers for Disease Control and Prevention, with 1,544,794 doses administered -- about 53 percent.

The data, however, can lag up to 72 hours given delays in how health care providers report the number of doses distributed.

"And I will note, because we’re data-first here, facts-first here, they’ve only distributed about 50 percent of the vaccines that they have been given in Florida, so clearly they have a good deal of the vaccine," Psaki said. "That supply will need to continue to increase as they are able to effectively reach people across the state, but part of the challenge, as we were just talking about, is not just having the supply, that’s pivotal, but also having vaccinators and having vaccine distribution places and doing it in a way that’s reaching people where they are and meeting local communities.

"And the president is going to be focused on that in a bipartisan manner regardless of what any elected official may have to say."

On Tuesday, DeSantis responded to the Press Secretary's remarks during a news conference in Vero Beach. He said the claims were "disingenuous" as Florida is not going to "divert second doses away from seniors" in order to give out more first doses. The governor also said the state is number one in the country for doses per capita for the top ten states.

"We are at the mercy of whatever is sent. So if they send 500,000 first doses instead of 266 I can double the drive thru sites, I can give more to hospitals. I can expand Publix. The possibilities are endless," DeSantis said.

The state's distribution of those vaccines, however, has been a frustrating experience for many seniors as online appointment registration crashing, clogged phone lines and every county -- all 67 of them -- announcing varying methods to get a shot in the arm.

DeSantis has praised the state's vaccine rollout and efforts to ensure vaccines are getting to senior citizens. The state reports more than 929,000 people aged 65 and older have received the first dose of a two-dose schedule while 37,920 people are "series complete," meaning they received both recommended doses of the COVID-19 vaccine to be considered fully immunized.