The president also warned Americans that things with the coronavirus were going to get worse before they get better. 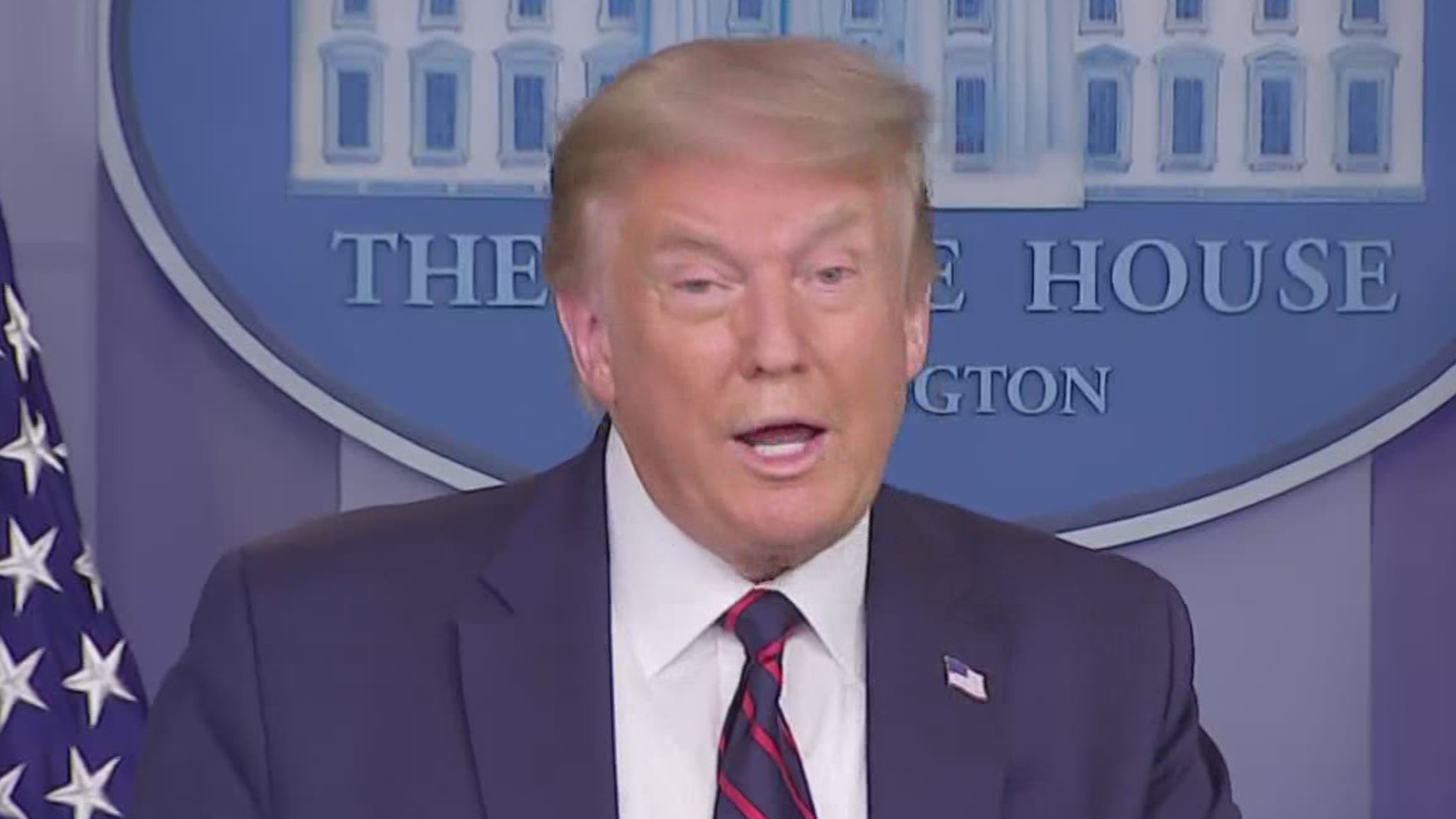 WASHINGTON — President Donald Trump sought to paint a rosier picture of the coronavirus for the nation Tuesday but conceded the pandemic is likely to get worse for a time as he revived his daily briefings with an eye to halting a campaign-season erosion of support as new cases spike across the country.

The early evening show at the White House came as the next stage of the federal government's response to the pandemic was being crafted on Capitol Hill. Lawmakers and White House officials were opening negotiations on a trillion-dollar-or-more “phase four” rescue package.

“It will probably unfortunately get worse before it gets better," Trump said from the White House, but he also touted a reduction in deaths and progress on vaccines and treatments for COVID-19, which Trump referred to repeatedly as the “China virus.” He also continued his belated encouragement of Americans to wear masks when social distancing is not possible, “Whether you like the mask or not, they have an impact."

“I’m getting used to the mask,” he said, pulling one out from his pocket, after months of suggesting that mask-wearing was a political statement against him.

RELATED: Next virus aid package could easily swell past $1 trillion

Little more than three months out from Election Day, Trump is hoping that the podium spotlight will give him an edge against Democratic rival Joe Biden. He appeared at the White House solo, without the medical experts or government supply experts he previously relied on to explain his government's response to the public health emergency.

“The vaccines are coming, and they're coming a lot sooner than anybody thought possible,” Trump promised anew.

As early as next week, the first possible U.S. vaccine is set to begin final-stage testing in a study of 30,000 people to see if it really is safe and effective. A few other vaccines have begun smaller late-stage studies in other countries, and in the U.S. a series of huge studies are planned to start each month through fall in hopes of, eventually, having several vaccines to use. Already, people can start signing up to volunteer for the different studies. 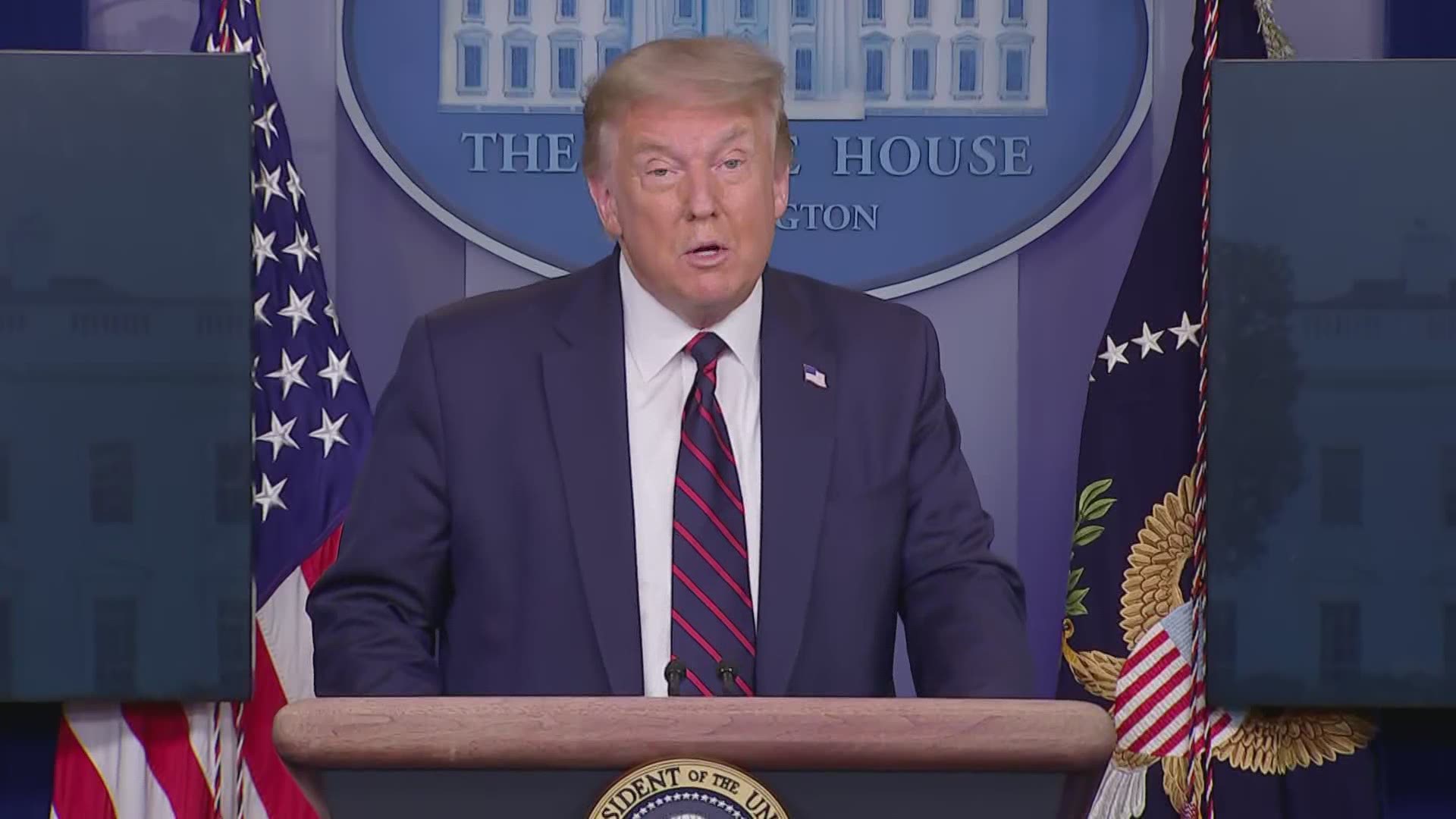 Health authorities warn there’s no guarantee -- it’s not unusual for vaccines to fail during this critical testing step. But vaccine makers and health officials are hopeful that at least one vaccine could prove to work by year’s end. Companies already are taking the unusual step of brewing hundreds of millions of doses so that mass vaccinations could begin if the Food and Drug Administration signs off.

"We’ll be able to get those numbers down," Trump said, saying his administration was working to improve the availability of rapid, point-of-care tests like those used to protect him at the White House.

Dr. Anthony Fauci, the nation's top infectious disease expert, told NPR Tuesday that he was glad Trump has begun to promote mask-wearing and expressed optimism the president would reinforce that message Tuesday.

“If we, during those conferences, come out and have consistent, clear, noncontradictory messages, I believe it will be very helpful in getting people on the track of knowing the direction that we need to go to get this pandemic under control,” he said.

In addition to discussing medical developments, he also was expected to focus on his advocacy for schools to reopen for in-person education, following his threat to try to withhold federal funds from those that stick to remote education. And he was sure to predict a golden economic recovery on the way and go after Biden, Democratic-led cities and aggressive protesters

Biden, for his part Tuesday, launched into scathing criticism of Trump as he outlined the latest plank of his economic recovery plan, charging that Trump “failed his most important test as an American President: the duty to care for you, for all of us.”

There was no shortage of advice on how Trump should comport himself.

Former House Speaker Newt Gingrich, an occasional informal Trump adviser, said the president should wear a mask to the briefing.

“That’s what’s going to convince people that he’s serious about this,” Gingrich said in an interview on “Fox & Friends,” Trump's favored morning show.

Trump did tweet a photo of himself in a face mask Monday, calling it an act of patriotism, after months of resistance to being publicly seen in the coverings.

Trump took to Twitter on Tuesday to offer a preview of potential messages for the briefing, claiming “tremendous progress” on vaccines and treatments for COVID-19. He said that “by comparison to most other countries, who are suffering greatly, we are doing very well - and we have done things that few other countries could have done!”

In fact, the U.S. leads the world in confirmed cases and deaths from the virus -- and ranks near the top on a per-capita basis as well.

Democrats are pressing for the next bill to include funding for election protections, while some Republicans have broken with the White House in seeking additional federal funding for testing and contact-tracing. Meanwhile, Trump has found few allies in his push for a payroll tax cut in the legislation.

Schumer in a news conference, encouraged White House aides to “keep Trump away from the podium.” “He is a threat to public health," he told reporters.

Scrapping the briefings was welcomed by aides who believed they were dragging down the president’s poll numbers, particularly with older voters. However, with his trademark rallies largely on hold because of the coronavirus, the view in Trump’s circle is that he needs an alternate means to reach voters.

And Trump missed the days when would dominate cable television ratings with his early evening briefings. Tellingly, when he announced Monday that the appearances could return, he did so with an eye toward their time slot and a boast about ratings.