'This money's not due to me': Woman overpaid thousands of dollars in Florida unemployment benefits after only claiming one week

A unique problem presented itself for Melissa Tison as she realized the Florida Department of Economic Opportunity was paying her for weeks she didn't claim. 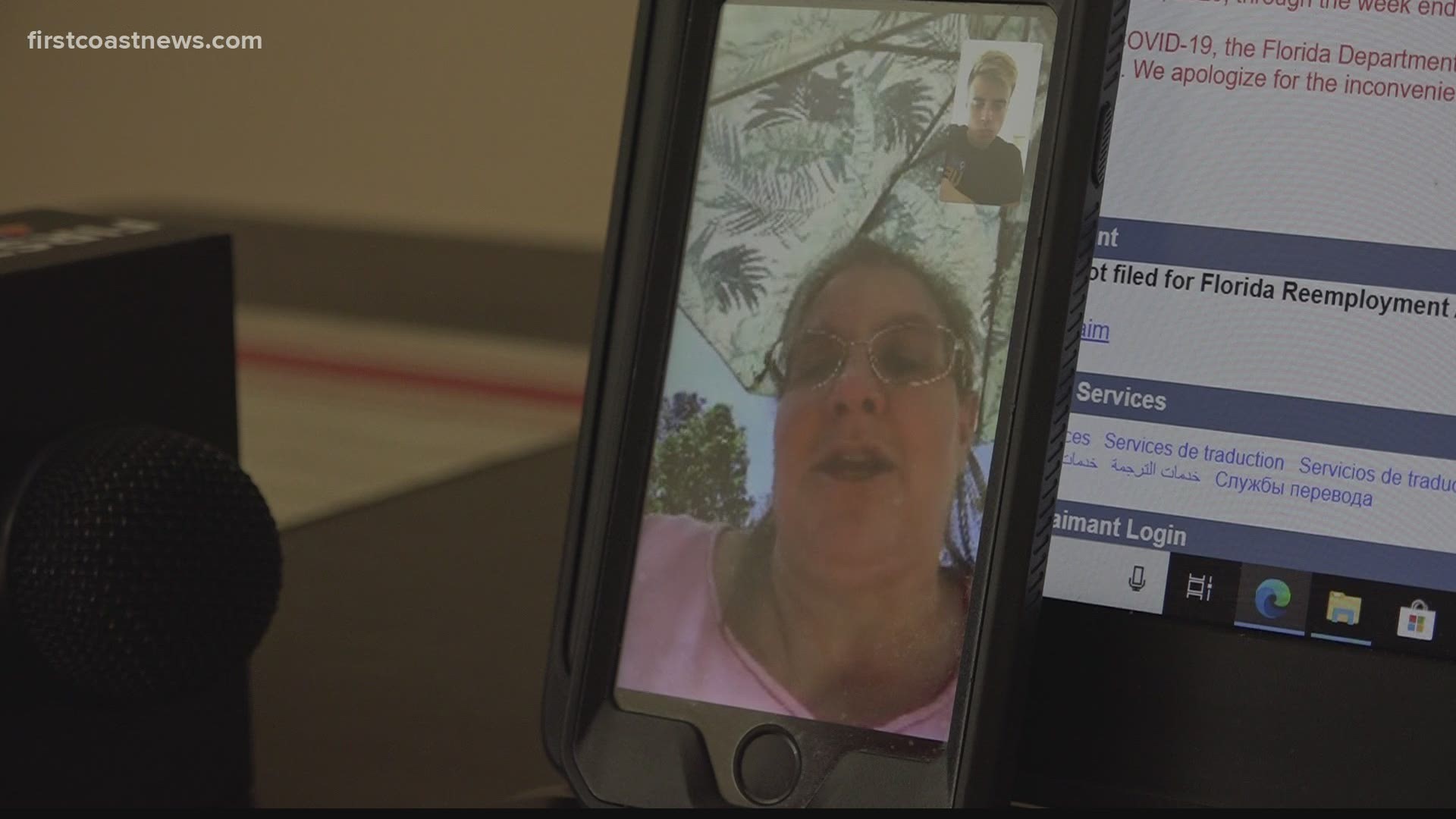 JACKSONVILLE, Fla — While thousands of Floridians await their first unemployment benefits after nearly two months, other claimants are now trying to tell the state to stop paying as they return to work.

Melissa Tison, working in finance for the Tallahassee Democrat, is facing a week of furloughs every month starting in April and going into June.

On Monday, April 13, she filed for her April week of benefits. She said the process was not too challenging, and she was quickly approved. By the following Monday, she received her check for $275 minus taxes in state Reemployment Assistance.

She went back in the system and put in her bank routing information, and four days later she got a $600 deposit in her account for the weekly CARES Act money guaranteed to both federal and state unemployment recipients.

At that point, she thought that was it for the month. She had received one state benefit payment and one federal.

But while she only claimed that one week of benefits, the payments kept coming.

RELATED: Report: Company behind flawed unemployment website says Florida got what it asked for

One day after she got her $600 deposit, on April 25, she opened her mailbox to find another check for $600. Three days later, she got another deposit into her bank account for $600.

Tison had sent the Florida Department of Economic Opportunity an email saying that she had only claimed one week and asking to stop payments, but she did not hear anything back.

She took the $600 check and put it in the mail, along with a handwritten letter describing what was happening.

Only claiming the second week of April, Tison should have received only one payment of $275 in Florida Reemployment Assistance money, and one payment of $600 in CARES Act money.

Instead, she ended up with three direct deposits of $600, two checks for $600, her first check for around $275 and another direct deposit of $988, which she calculated is four weeks of state benefits minus taxes. In total, FDEO paid her around $4,200, and she now owes them around $3,400.

Some of the money she owes is in her checking, and the rest is in the check she mailed to FDEO. She said she was thinking of putting the money still in checking in her savings until the state asks for it back, but she is afraid they will overdraft her account without notice.

"I want to be the honest person and say 'Hey, you overpaid me.' But I don't want it to come back and haunt me later and they say 'Hey, we overpaid you, we're gonna take it out of your account," Tison said.

Tison's problem illustrates a larger issue with FDEO and the CONNECT system that has developed in recent weeks: claimants don't have a way to let the state know they have returned to work.

It is possible Tison fell into a unique position because she was trying to only be paid for one week in April, a month during which claimants were told they could stop going into the system to claim weeks.

But she does not understand why she would keep getting deposits and checks when she made it clear in her claim that she was returning to work.

There is a set of recommendations for repaying FDEO for overpayments. Those guidelines can be found here.

Tison said she has not received any kind of notification from FDEO to repay, and so she feels like she is in limbo until she is officially given a dollar amount to pay back.

As of Monday, claimants will have to begin once again claiming weeks in CONNECT, which could spare Tison from further payments. Although she is still stuck with trying to repay this money.

In a conversation with an FDEO spokesperson, we were told the state is currently working on a solution, but right now the best method is to call or email in order to stop benefits from being paid out.

Payments appear to be sporadic: people like Tison report being overpaid, while many more have reached out to say they have only received partial payments. FDEO has not answered our request to release how many of those "claimants paid" have been paid in full.

And payment numbers for federal benefits, known as Pandemic Unemployment Assistance (or PUA), are abysmal. PUA should act as a safety net for those who do not qualify for state benefits, but of the 325,837 Floridians deemed "ineligible" for state benefits so far, only about 23,000 have actually received PUA.

What's more: many of those who were deemed "ineligible" should qualify for state benefits, meaning PUA should not even be a concern.

We do know there have been payments made of the weekly $600 in CARES Act money, which is referred to in FDEO's dashboard as Federal Pandemic Unemployment Compensation.

As of Monday, about $1.12 billion in $600 weekly payments has been disbursed. But thousands of those who are still "pending," have yet to receive a dime.

RELATED: Ag. Commissioner Nikki Fried speaks with On Your Side about unemployment issues, calls for investigation