While it's important to track both types of tests, combining them can inflate testing numbers and water down the rate of new cases. 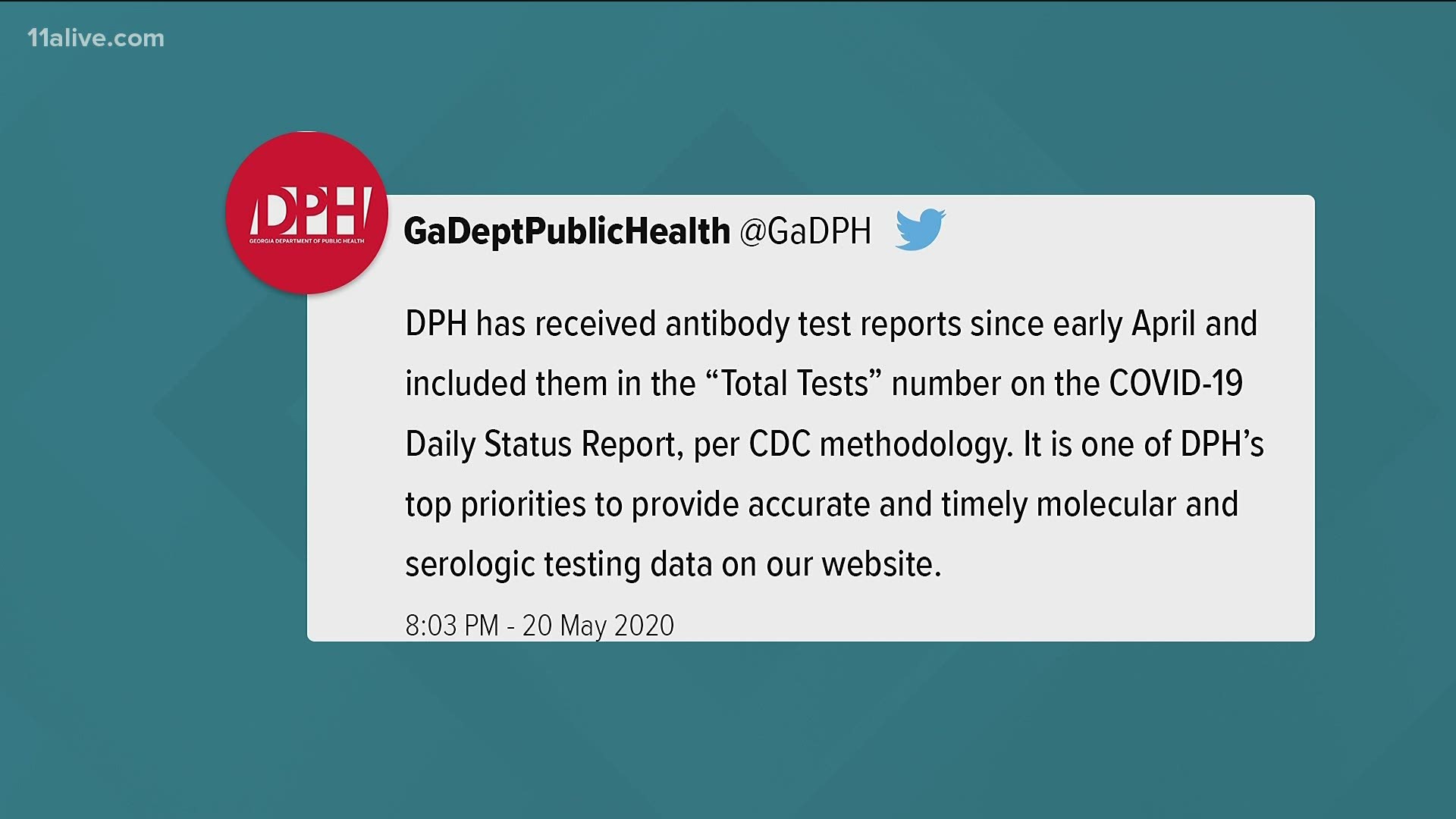 One of those tests - the antigen test - detects new cases of coronavirus in a person, and involves a nasal swab. The other is an antibody test, which shows proof of a past infection and possible resistance to the virus.

While it's important to track both types of tests, combining them can inflate testing numbers and water down the rate of new cases.

11Alive's Cheryl Preheim spoke to Georgia Department of Public Health Commissioner Dr. Kathleen Toomey about the new development Wednesday evening, who said she just found out that the two types of tests were combined in the state's count -- and still trying to sort through that information.

"We are actually working on that right now, and I'll have an update probably by (Thursday) as to how we will display that data - whether still as part of aggregate total, or separate it out so you can see which test is being done to identify current infection versus past infection," she said during an interview with 11Alive. "So, that's late-breaking news that I'm still learning about myself."

This development is significant for a few reasons.

One goal of the Centers for Disease Control and Prevention is to test at least 2 percent of the population. On Monday, the governor's office said Georgia passed that benchmark by testing 3.3 percent of the population. The state also said it added more than 50,000 tests over the weekend, and, of all those tests, there was a drop in the percentage of people testing positive.

That's exactly what we want to see happen. But that may be misleading, if the two different tests results are combined. That's partly because antibody tests don't tell us how many people actually have the virus. The tests have also been widely criticized for being unreliable.

In addition, there's no obligation for private labs - like Quest Diagnostics and LabCorp - who conduct the antibody tests to report the results, although we've been told that Quest does provide them to the CDC.

In the past, when we asked if the Georgia DPH was including antibody tests in the count, we were told they were not. They've now confirmed - following our segment on 11Alive - that antibody tests are included, and had apparently been since April.

In a statement, the DPH said they have been following the current CDC methodology, and have included the antibody tests received in the “Total Tests” number currently listed on the state's COVID-19 Daily Status Report.

The health department said its staff is "working diligently to provide greater transparency" in the testing data displayed on the Daily Status Report.

"One of our top priorities is to provide accurate and timely data to the public and we will continue to make every effort to do so," the statement said.

As of Wednesday, 57,000 tests, or about 14 percent, are actually antibody tests. Those let us know who’s built up a resistance to the virus, but not who has it. Antibody tests are not a good measure of the rate of infection. That’s a key indicator public health officials monitor to know how the virus is spreading.

DPH said it will update the website to reflect the number of “Total Tests” that are antibody tests and antigen tests.

There have been questions raised before about the way the state Department of Health presents information, and criticism over data entry errors. When asked about this, Dr. Toomey said she wants the public to have confidence in the state's COVID-19 information.

"I want the public to trust the information they are getting from us, and if there's any doubt about the truth about our data, it undermines confidence," she said.

"We are working very hard to ensure the data are accurate, and portrayed in a way that's easy to understand," she assured. "Data are a tool to help us understand the epidemic. We need to ensure those tools are understandable to everyone who looks at them and we will continue to work on that."

Toomey said in terms of keeping our curve down in Georgia, social distancing and masks are the norm for the foreseeable future. She said it is an especially important reminder heading into the holiday weekend.

These metro Atlanta restaurants have permanently closed since the coronavirus pandemic

Can coronavirus spread in swimming pools? Here’s what you need to know