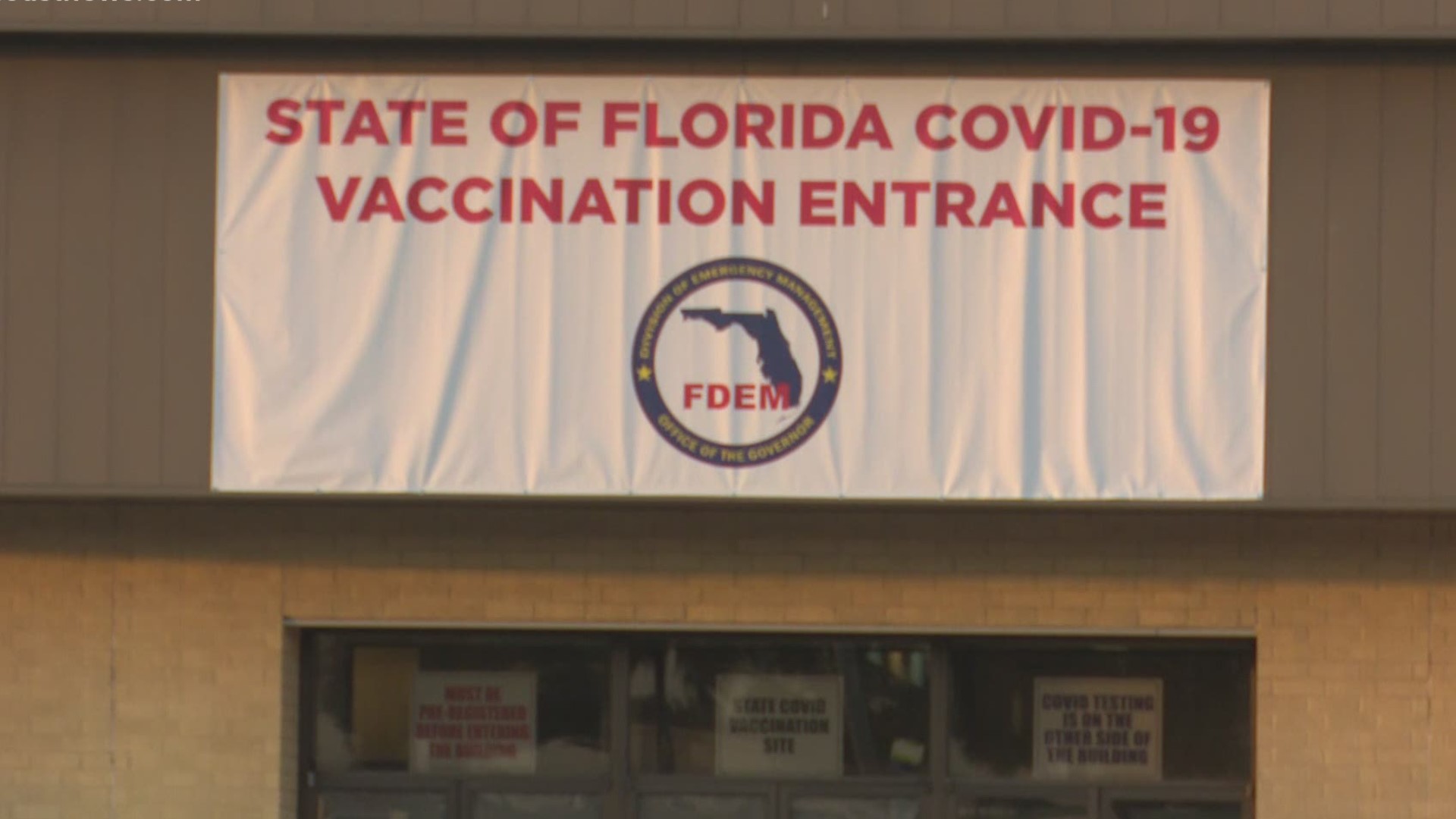 JACKSONVILLE, Fla — Storms around the country are delaying vaccine shipments to states, including Florida. A vaccine site on the First Coast that hasn't been affected by weather delays is Regency Square Mall.

The shipments to Florida that have been affected are Moderna, and Regency is a Pfizer site, according to state officials. Regency has actually been able to offer more vaccinations than appointments scheduled. The state has advertised for the past few days, including Sunday, if you're 65-years-old or older, you could come to Regency and get the vaccine without an appointment.

When asked how the site is able to do this, if maybe they're not seeing the demand for appointments that they were previously, the state replied simply, "We have become extremely efficient and can accommodate more than appointments being made."

"I've been worried for almost a year now that I'm going to spread it to her," Lise Bailey, whose mom got vaccinated Friday at Regency without an appointment, said.

Bailey saw a post Friday that those 65 and older could get vaccinated without an appointment at Regency.

"I took a screenshot of it and sent it to my mom because she's really bad about taking care of herself, and I was like, 'look, you need to go,'" she said.

Bailey's 73-year-old mom was able to get vaccinated, along with several others the past few days, without an appointment. State officials said they're able to offer vaccines to more than just those with appointments because of the efficiency of the site's staff.

If you're looking for your second dose, if it has been 21 days or longer since you got your first dose at Regency, you can come any day between 9 a.m. and 4 p.m. any day. You just have to bring your ID and CDC card.

"They got her in and out very, relatively quickly, and the next thing I know, she's at the window, scaring my sister and I and saying, 'Come on. They've got enough for you guys, so we went in and got our's," Bailey said.

Bailey and her sister also got vaccinated Friday. She said they both have health issues but are under 65-years-old. I asked state officials how this was possible if they didn't fall under the executive order for those who qualify if maybe there were extra doses at the end of the day. State officials responded only by saying "We make vaccines as people walk in. Unthawed vials are good for five days."

Officials said the best way to guarantee a dose is still to book an appointment. Call 1-866-200-3762, or visit myvaccine.fl.gov. If you call for an appointment, leave your contact information and your date of birth. You won't get a call back until there's a dose available.

You don't have to be a Duval resident to get vaccinated at Regency, just a Florida resident. Make sure you bring your ID.