Gov. Ron DeSantis' office says they're of the understanding that Jones' account was suspended for “platform manipulation." 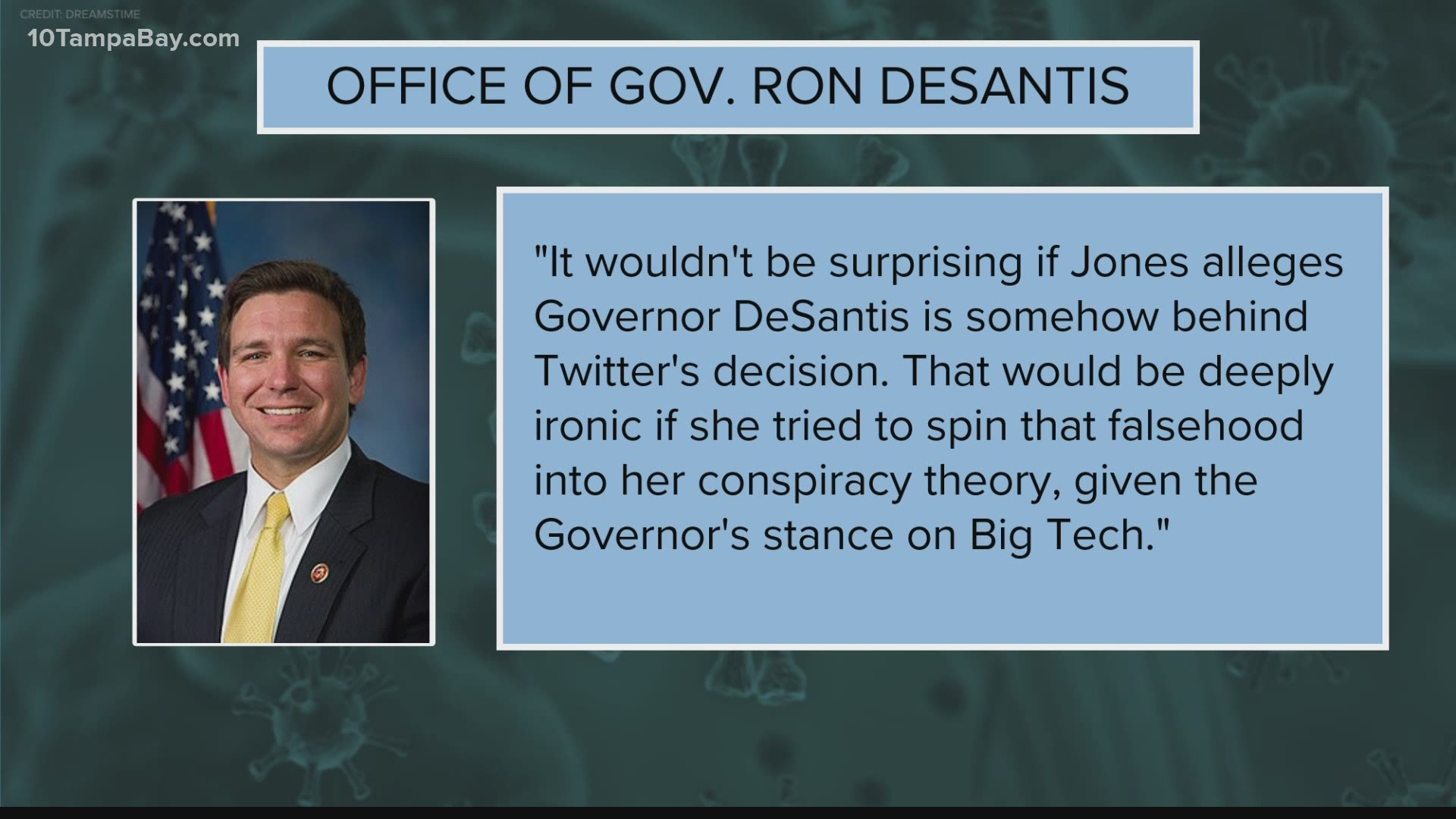 According to the Miami Herald, Twitter has since notified Jones that it has received an appeal from her over the suspension of the account.

“It was clearly an auto-lock feature against spamming. Should be back up soon,” Jones told the news outlet.

A spokesperson from Gov. Ron DeSantis' office says they're of the understanding that Jones' account was suspended for “platform manipulation." Jones has been a vocal critic of DeSantis since the COVID-19 pandemic began.

"A clear violation of the platform’s terms of service, which prohibit inauthentic activity like buying followers and creating multiple redundant accounts. This does not look like an example of censorship, even though Rebekah Jones is a super-spreader of COVID-19 disinformation and has harmed many hardworking DOH employees with defamatory conspiracy theories that she promoted on Twitter," the governor's office wrote in a statement to 10 Tampa Bay.

DeSantis' office adds that it "wouldn't be surprising" if Jones alleged the governor was "behind Twitter's decision."

"That would be deeply ironic if she tried to spin that falsehood into her conspiracy theory, given the Governor's stance on Big Tech," it added.

Jones first made headlines in 2020 after being ousted from her role. Following her removal, the Florida Department of Law Enforcement claims Jones illegally accessed a state emergency alert system and sent a mass text message, delivered to roughly 1,750 people. Jones has publicly denied such claims.

The Nov. 10 message in question urged people "to speak up before another 17,000 people are dead. You know this is wrong. You don't have to be part of this. Be a hero. Speak out before it's too late."

A search warrant was obtained and served at Jones' home in December, to seize her computer equipment and cell phones. Jones, who called the search warrant a "sham," followed with a lawsuit against FDLE Commissioner Rick Swearingen, which she later dropped.

In 2021, an arrest warrant was issued for Jones who turned herself in to police after claiming the warrant was "based on a lie." At the time, Jones did admit that "police did find documents I received/downloaded from sources in the state or something of that nature."