The reserve force is providing aid in the form of planning and medical support across the three jurisdictions. 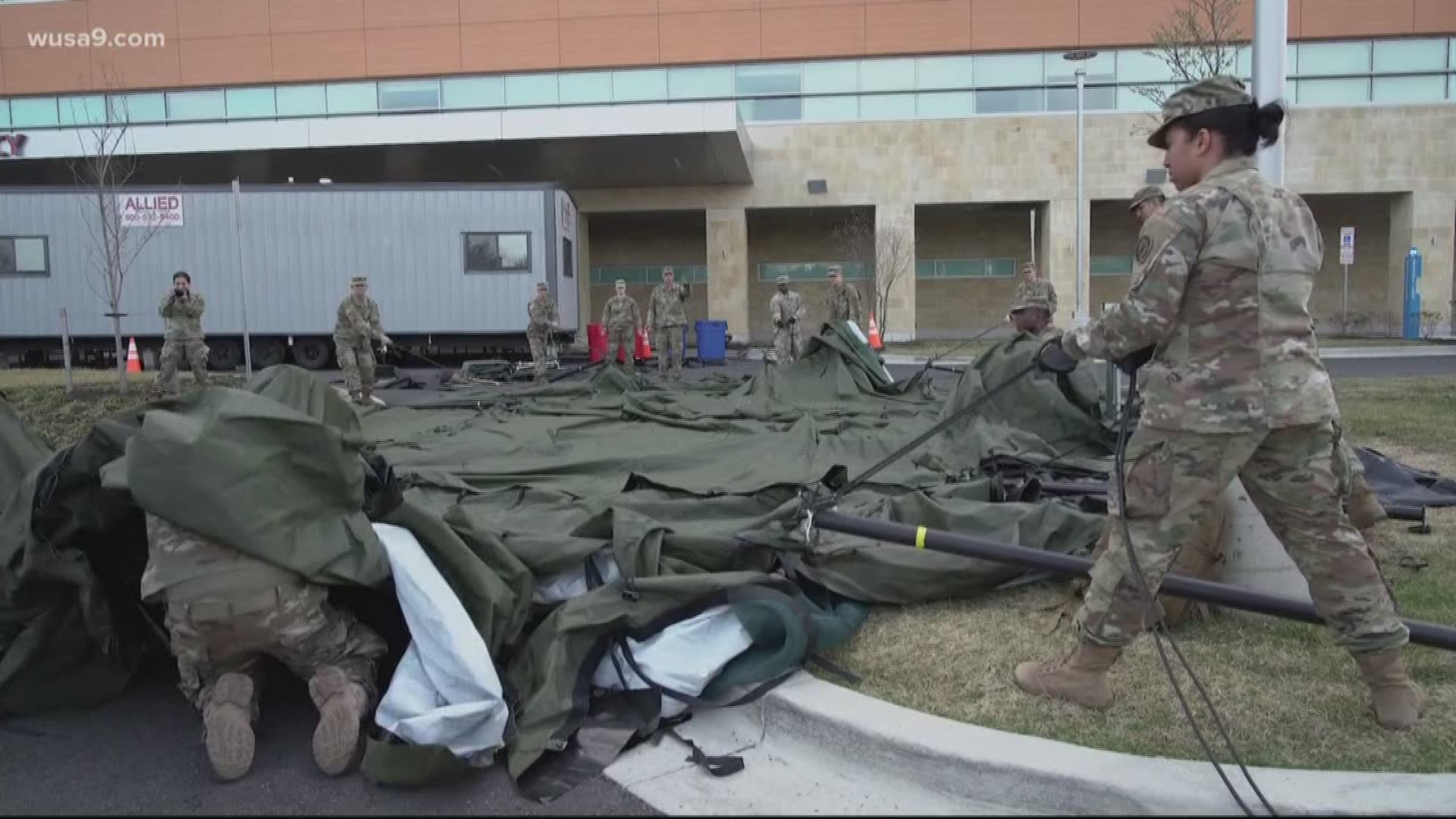 WASHINGTON — The National Guard is aiding Maryland, D.C. and Virginia as all three jurisdictions work around the clock to limit the coronavirus' spread.

In a letter to all the nation’s National Guard members, General Joseph L. Lengyel, chief of the National Guard Bureau, wrote the reserve force would focus on providing medical testing, facilities, ground transportation, engineers and planners wherever they are needed.

"The depth and breadth of our knowledge, experience and skills makes a difference in this fight, and our efforts help save lives," the General’s letter reads.

Each state’s National Guard has worked to assist its state’s needs in different ways.

In Maryland, the National Guard has been busy helping with the nation’s "stockpile" mission to gather needed medical and pharmaceutical supplies, according to Major Kurt Rauschenberg, of the Maryland National Guard.

He added the Maryland National Guard has also been providing aid at local field medical sites.

"Most recently, we've been helping out with a lot of the field hospitals and screening locations, like FedEx Field and the convention center in Baltimore that we're still working very hard on," Rauschenberg said.

He said the Maryland National Guard will also help with food distribution at 38 different locations around the state.

Rauschenberg said Marylanders should not be surprised to see men and women in military uniforms in and around their communities over the next couple of weeks.

"It's really no different than we you see us walking down the street any given day to grab a bite to eat during lunchtime," he said.

Rauschenberg said tasks like the ones currently put before the Maryland National Guard are the reason why many of its members chose to join the force.

"We wanted to get out and help our neighbors," he said.

RELATED: LIST: DC's nonessential businesses that will close amid the coronavirus outbreak

Ryan McCarthy, Secretary of the Army, approved the District of Columbia’s request for support from the National Guard roughly a week ago.

Since then, the DC National Guard has been working to assist the District’s Homeland Security and Emergency Management Agency [HSEMA] from its Emergency Operations Center downtown.

"The District of Columbia National Guard is always ready and proud to support our community," Maj. Gen. William J. Walker, Commanding General of the District of Columbia National Guard, said. "During these trying times, it is important that we come together as one to continue to protect our loved ones, and co-workers and we will get through this together."

DC National Guard members can already be seen around the District.

They have assisted the Metropolitan Police Department in closing roads in and around the Tidal Basin to Cherry Blossom tourists.

WUSA9 is awaiting a response from DC HSEMA as to when and where those sites will be set up.

Clapper said every member participating in missions in D.C. are unarmed and medically screened prior to starting their work.

At that point, guard members in the Commonwealth were placed on standby with the intention to mobilize and dispense supplies and equipment to Virginia residents when the number of local coronavirus cases increased.

A.J. Coyne, a public affairs specialist with the Virginia National Guard, said the guard has roughly 100 personnel on duty to support the Commonwealth’s coronavirus response.

He said many of those people are currently conducting planning with state partners.