Curry was joined by officials from the Florida Department of Health in Duval County and provided updates on local COVID-19 vaccination efforts. 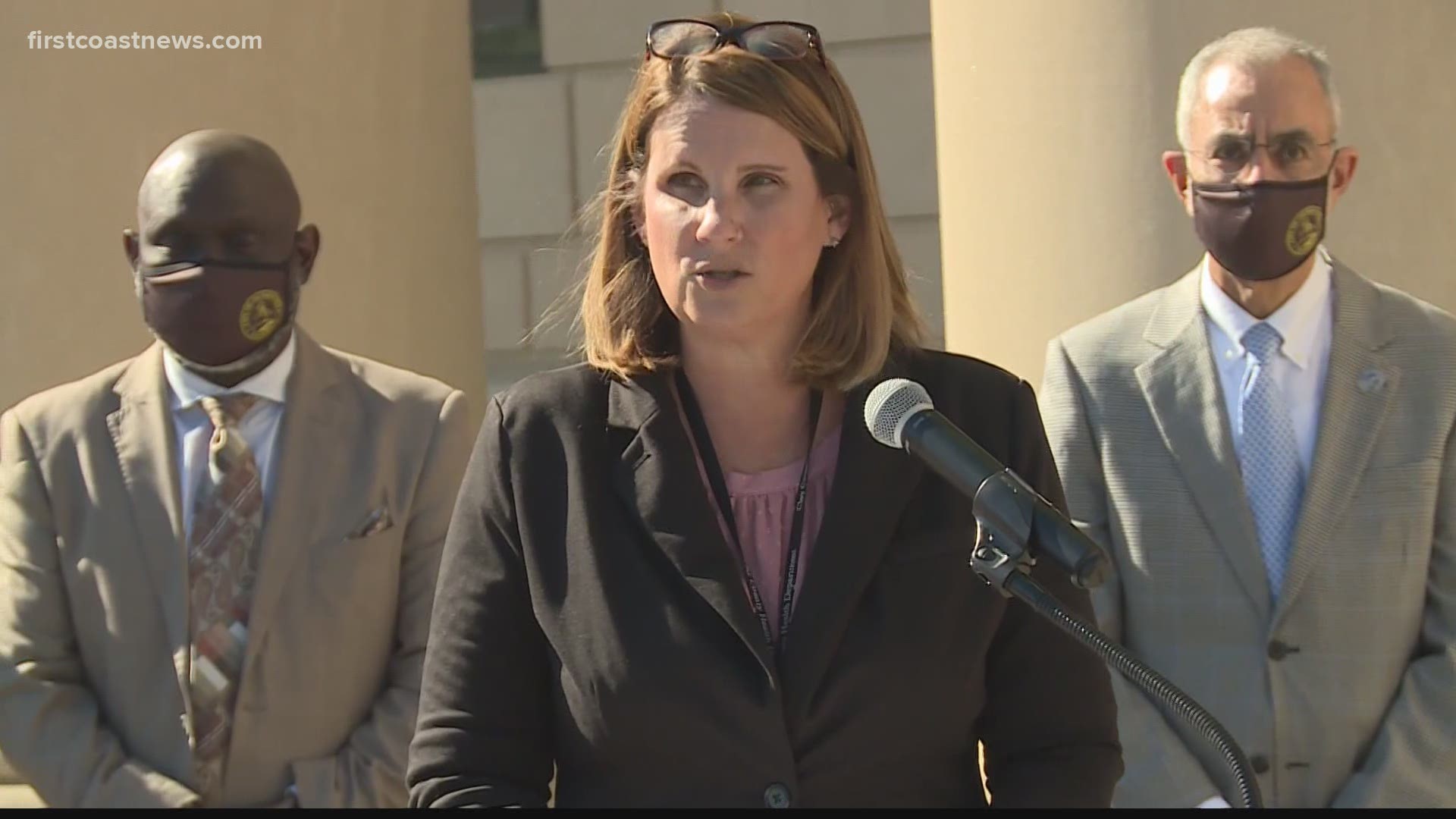 JACKSONVILLE, Fla. — "We are on the road to being back to normal," said Jacksonville Mayor Lenny Curry during a Monday news conference where he outlined the city's plan for COVID-19 vaccinations.

Last week, the Florida Department of Health Duval (FDOH) began offering vaccines to medical personnel with direct patient care, and individuals 65 years of age and older at the Prime Osborn Convention Center. The process was described by many as 'confusing.'

Curry and FDOH staff said they are working to iron out details regarding scheduling issues, the arrival of additional vaccines and when they will be made available.

"We understand this frustration, people are scared and they want this vaccine," said Curry.

RELATED: 'Confusing' COVID-19 vaccine rollout in Jacksonville, some turned away

Interim Health Officer for FDOH, Heather Huffman, said that the scheduling issues were largely caused by an influx of calls at one single time. She says the state is rolling out a scheduling software that will allow appointments to be made more efficiently but that it's not accessible yet

The Department of Health said it has reached out to people who submitted an appointment without scheduling a date and time through a robocall and e-mail. People who believe they have set up an appointment should check their e-mail and voicemails before coming to Prime Osborn to receive the vaccine.

Until it is, she recommends to keep trying the appointment phone number or the FDOH's new online scheduling site and to make sure you select a date and time before hitting submit. If there are none available, she says don't just hit 'submit'.

Huffman says over 4,000 people have submitted invalid forms so far and FDOH has had to reach out to them to let them know not to just show up.

The Department of Health is also working to change protocols to prevent further issues. Among the changes are:

The mayor said that upon the arrival of additional vaccines in the coming days, the city's plan is to convert the Legends and Regency COVID-19 testing centers into vaccination sites by early next week.

He noted, however, the city ultimatley has no control over the supply chain.

Huffman said that Duval County has already received 39,000 doses of the vaccine. This is in addition to what hospitals have received for their own staff.

Right now, the Prime Osborn Convention Center is vaccinating roughly 850 - 900 people a day on an appointment-only basis. She estimated that in four weeks they will be doing double that.

For those who received the vaccine Monday, they said the process was smooth and efficient.

“We walked in, we got a shot, and 15 minutes later we was out of there,” said Steve Adams, who received his vaccine Monday.

Adams said his wife was relentless trying to get them an appointment.

“My baby got on the telephone and she stayed on for about 13 hours,” Adams said. “I held my hands up and said thank you Jesus, we’re going Monday.”

After struggling to get an appointment, the Adams were convinced Monday would not be easy. They even brought a chair to sit and wait.

Angela and Patrick Bisso agreed the process was easy.

The Bissos said they both contracted the virus in August and would never want to go through that experience again.

“I still haven’t regained my sense of smell,” Angela said.

The recipients agreed they are eager to get their freedom back, not always worrying about the virus.

“We want our loved ones protected and we want to be protected to be around them,” Angela said.

Marian McMahan also is ready to get her freedom back, but has not been lucky enough to get an appointment yet.

“It seems like they’d make better plans than what they did,” McMahan said, as she has tried to get an appointment for days. “It’s so terrible because I don’t know if or when or ever.”

McMahan is currently in the majority, struggling to get that appointment. These recipients are eager for the people around them to be vaccinated as well.

She said that many of the same providers where you might get a flu shot each year like CVS, Walgreens have already signed up to be providers of the vaccine. Right now they are just waiting for additional supplies.

When asked about whether or not he was planning to take the vaccine, Curry said that although he's been offered, he would only be taking it when he's qualified to do so based on his age.

There was a lot of confusion for the distribution of the vaccines last week in Duval County.💉💉💉 At 5 & 6 I’ll have more details on the updates on local COVID-19 vaccination efforts. https://t.co/W9VCGy68QM