The Hillsborough County Emergency Policy Group will discuss a similar concept next week. 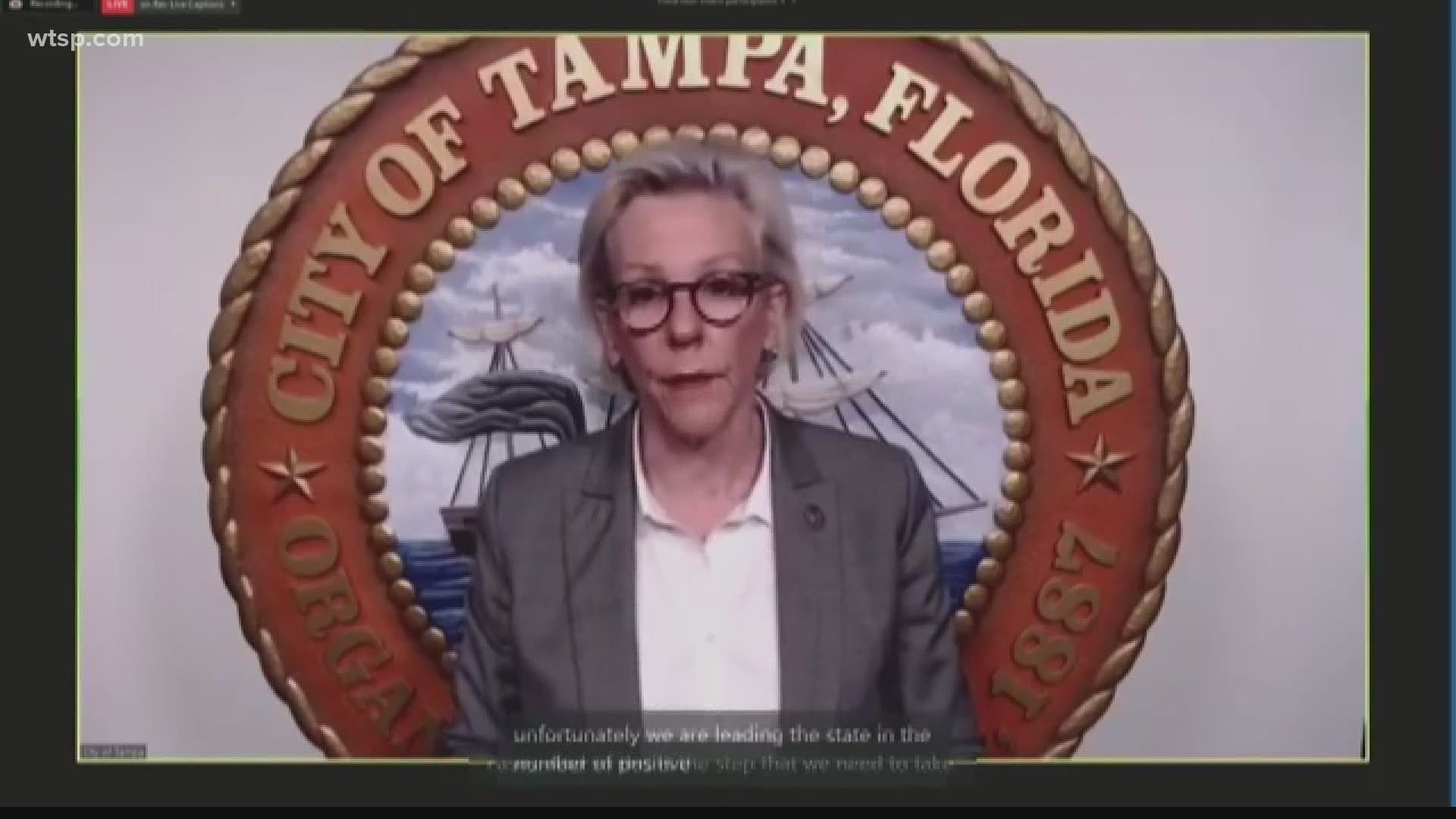 TAMPA, Fla — Members of Hillsborough County‘s emergency policy group say they will wait until Monday to decide whether to mandate face masks be worn at local businesses. But, one local leader isn't waiting for that to happen.

Tampa Mayor Jane Castor, who is a member of the emergency policy group, says whether or not the county passes a face mask mandate, she will at least do something sooner within the city of Tampa. The city is drafting a mask ordinance for people who live there.

"I'm going to put a mandatory mask ordinance for the city of Tampa right now to protect citizens," Castor said, highlighting that the coronavirus is an emergency right now and not a luxury to wait on.

The order will go into effect at 5 p.m., Friday, June 19, and requires individuals to wear a face-covering while indoors. Those who do not comply will face a civil citation.

However, Mayor Castor is just hoping that residents follow the new rule, “When we put the safer at home order in place, by in large, everyone compiled.”

Anyone under the age of 2 or has a physical condition that prohibits them from wearing a mask is not required to wear one.

"The community is looking for leadership and that's what they need from us right now," Castor said.

Those without a mask will be supplied with one, according to Castor.

“If we wear masks, we can put an end to the spread of it. That is the bottom line," Castor said.

The mayor also shared the city has seen a 900 percent increase in positive cases over the last month, in addition to housing four of the five zip codes with the highest positives tests in all of Hillsborough County.

Board members all agree there is an alarming increase in the number of COVID-19 cases in Hillsborough County. But, they do not agree about whether face masks should be mandated or about how a rule would be enforced countywide.

As for why Castor wanted to act now?

“I know that this will dramatically reduce the spread of COVID-19 in our community and it will save lives,” Castor said, driving the point home that this change is for both the physical and economic health of Tampa.

The 14-day average number of COVID-19 cases in Hillsborough County, even with no substantial increase in the number of tests being taken, has soared from 109 a week ago to 337 on Thursday.

After nearly an hour of debate, the board voted 5-3 in favor of at least allowing the county attorney to come back with an ordinance that will likely be similar to the one being implemented this week on the other side of the bay.

St. Petersburg Mayor Rick Kriseman announced that effective at 5 p.m. on Friday, all employees at local businesses must wear face masks or coverings inside parts of their buildings that are open to the public.

Back in Hillsborough County, board members heard an emotional plea on Thursday from a doctor with USF public health, who begged them to do something -- or warned thousands of people will die.

Florida saw another jump in confirmed coronavirus cases Thursday. According to data from the Florida Department of Health, there were 3,207 new cases reported on June 18 -- making it the largest single-day spike the state has seen since it began tracking them.

RELATED: Study: Florida could be the next epicenter of the COVID-19 pandemic

RELATED: St. Petersburg will require workers at local businesses to wear masks in areas open to customers
What other people are reading right now: