Jacksonville nursing home has had 170+ residents and staff test positive for COVID, 21 have died

Signature HealthCARE of Jacksonville's daily recorded COVID line said it has had 112 residents and 60 staff members test positive for COVID-19 to date. 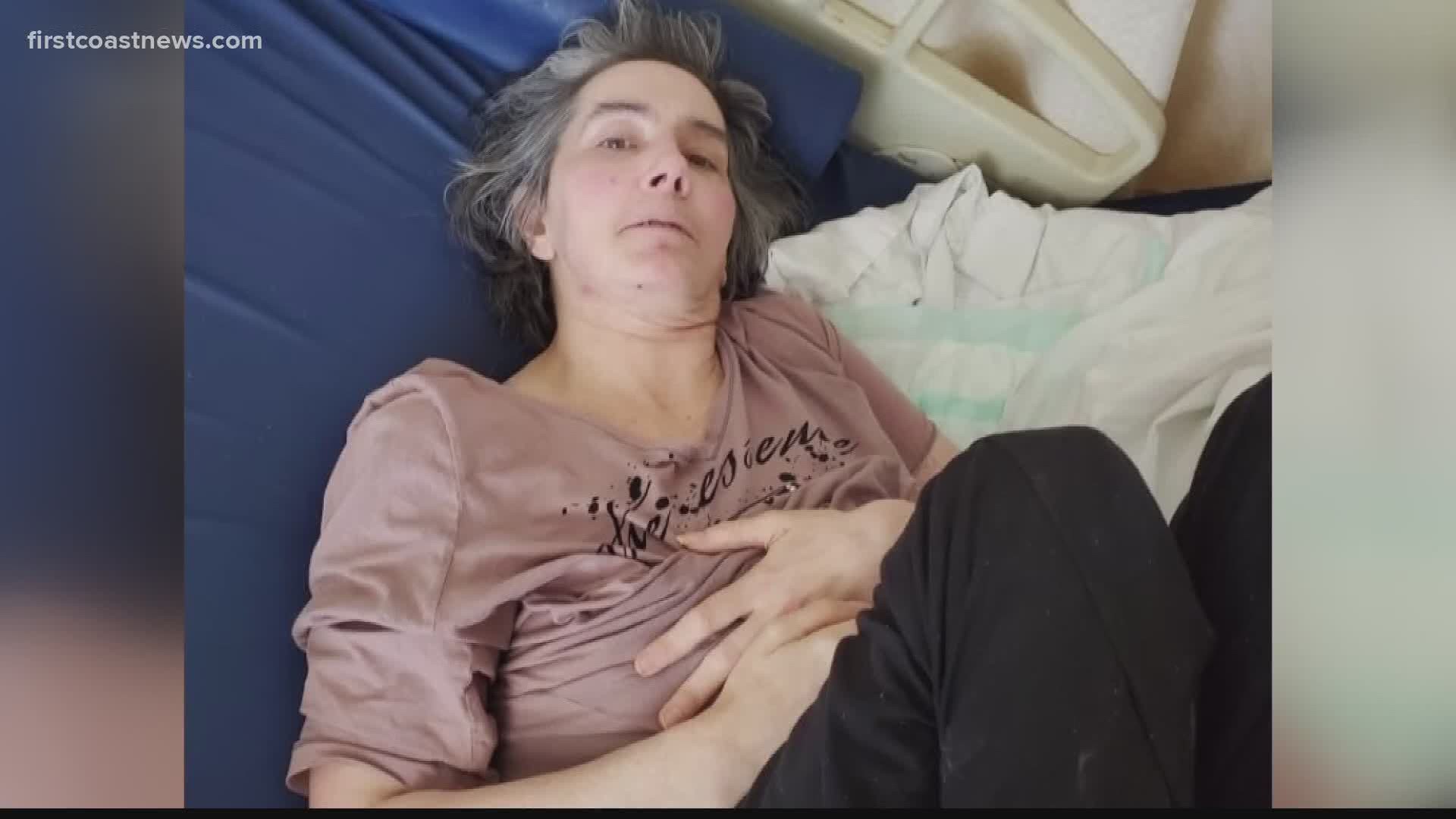 JACKSONVILLE, Fla. — A Jacksonville nursing home has had more residents who tested positive for COVID-19 die than any other long-term care facility in northeast Florida.

Signature HealthCARE of Jacksonville said it has had 21 residents die after testing positive. The Florida Health Department’s provisional list puts it in the top 20 long-term care facilities in the state with the most deaths associated with COVID-19.

“I have no rights,” said James Brooms, 39, a resident at Signature HealthCARE of Jacksonville. “My only escape from here is to go to a hospital under the pretense of an emergency and tell them I don’t want to come back here.”

First Coast News has been sharing the stories and concerns of families who have had loved ones at the Westside nursing home since June.

RELATED: 'Get the people out of there': Nursing home resident dies after testing positive for COVID-19; Relative says more needs to be done to stop the spread

“My sister is there because I cannot take care of her myself,” Emily West said. “So, I have to entrust this nursing home to take care of her, and I should, without a doubt, when I leave there know that’s what's happening, and I have a lot of doubts right now.”

We have repeatedly asked Signature HealthCARE for an on-camera interview but have only received statements.

“While no healthcare facility is perfect, we realize the media’s responsibility to seek out the truth and press for accountability." Ann Bowdan Wilder, a spokeswoman for Signature HealthCARE wrote. "However, it nears the line of tyrannical and opportunistic when the media continually and repeatedly piecemeals the breadth of responsibilities, daily decisions, efforts, and tireless work by hardworking staff and facilities.”

On March 15, Gov. Ron DeSantis issued an emergency order banning visitors to long-term care facilities to protect the vulnerable population from COVID-19. For more than four months now, those living in nursing homes have not been able to see their loved ones in person. These are the stories of the toll it’s taking on both those on the inside and the outside.

A resident's cry: "I want our freedoms back"

“I don't want to be here in this building/prison anymore,” Brooms said.

He said he ended up at Signature HealthCARE of Jacksonville due to a broken neck that left him partially paralyzed.

To date, the Westside nursing home had 112 residents test positive for COVID, including him, along with 60 staff members, according to the facility’s daily recorded message. Brooms tested positive May 21.

How many of the residents actually died due to COVID-19 is not known.

“It is a mandate by the state and through our Health Departments that anyone who tests positive for COVID-19 and then passes, regardless of what our medical experts and directors believe is the true cause of death, it has to be listed as a COVID-19 death and reported to the Health Department as such,” Wilder explained.

Credit: James Brooms
James Brooms is a resident at Signature HealthCARE of Jacksonville.

Brooms said being at the center is like being in "solitary confinement."

“It's like I don't have any rights anymore," he said. "I can't leave to go outside. I can't do anything at all other than lay in my bed all day and watch TV or play on my phone and try not to go insane."

He called his time there a "sad existence."

The Florida Health Department’s provisional list puts Signature HealthCARE of Jacksonville in the top 20 long-term care facilities with the most deaths associated with COVID-19.

“It's a death trap in here,” Brooms said.

He said he worries the virus may just keep recirculating throughout an enclosed environment.

Brooms said he was kept in quarantine for more than two months until being moved last week. He said conditions in the COVID wing deteriorated weeks after the health department left the facility.

Signature HealthCARE paints a different picture. Its website states it has been aggressively proactive in implementing active measures against the coronavirus. The nursing home says it is testing staff every two weeks for COVID-19.

“The safety and well-being of our residents and stakeholders is always our top priority. We closely monitor all CDC and other government agency guidance and follow their directives.”

The center's website says residents who test positive for COVID-19 are either treated at the facility in isolation or in a COVID wing/unit. If necessary, they may be sent to a partner hospital.

“Designated COVID units are isolated with barrier systems in place, protecting the environment from the rest of the facility, with separate supplies and food, as well as dedicated staff who work on the COVID unit only. Personal protective equipment (PPE) is provided and worn per CDC guidelines. Signature HealthCARE also has a consulting Infectious Disease physician and Infectious Disease nurse on board, who have been providing guidance,” the website states.

Brooms is angry about the outbreak of COVID cases that he describes as spreading like a wildfire, leaving him in a vulnerable position.

“They're supposed to check and change you, if needed, every two hours and it's more like every six to eight, sometimes not at all on night shift. The changing thing is so bad that I try to hold it for as long as I can because I know I'm going to sit in it for hours, and I try to drink as little as possible, so I'm honestly probably dehydrated,” he said.  “I didn't have a shower or bed bath for over two months once I was put back here in the COVID unit. I'm not the only one who was like that.”

Brooms said he’s been in bed for more than two months, and now that he tested negative twice for COVID he is still stuck in bed.

“I want our freedoms back,” Broom said.

“I’m just really concerned about her safety and well-being,” West said. “No one ever contacted me to let me know her weight had gone down so much.”

Her sister has been living in the nursing home due to a stroke that left her unable to communicate. West said blood tests showed no signed of infection and provided no answers for the dramatic weight loss. She said the nursing home told her it’s possible she was weighed incorrectly, and they planned to weigh her again.

“If people aren't weighing her right then what else is not being done right, you know, are people getting their meds the right way at all? If this weight loss was real, has she not been getting fed properly? She has a G-tube, so it's a pretty simple way to feed somebody on a G-Tube. I'm very, very concerned about my sister, extremely concerned about her,” West said.

West scheduled a doctor’s appointment for her sister to get checked out Wednesday. Her sister never showed up. She was later told someone at the nursing home had inexplicably cancelled her transportation. Upset, West went to the facility to check on Meredith.

“They let me get in my car and drive to the side of the building where her room was and they opened up the blind and the window so I could see her,” West said. “Her hair was a mess. I said who cut her hair and they said the beautician must have, but the beautician is not allowed in because of COVID-19, and so I said well if she's not allowed in who cut her hair? They said' oh, we don't know, maybe she pulled it out.”

As Meredith's legal guardian, West said she is entitled to answers.

“They just, you know ,say they're sorry, ‘We're going to look into it. We're so sorry.’ I mean that's the answers I get,” West said.

Signature HeatlthCARE said it will look further into the complaints.

“We appreciate your fervor and the responsibility you have in your investigative reporting, but the media should not be the intermediary. As we have stated, many times previously to you specifically, our communication with our residents and their responsible parties is also a top priority, even with those residents who may have a complaint and go to the media. We will continue in these efforts,” Wilder said.

Not satisfied with what she said is a lack of answers, West reported her concerns to the Department of Children and Families.

“I hope that somebody in the state, the health department, somebody will step in and say 'you know what? Maybe we should take this bit more seriously and get in there and see what's going on,'” she said.

She is now looking for a different nursing home to move her sister. For now, she is left wondering if Meredith is getting the care she needs.

“I'm just so stuck because I can't go sit there with her and visit with her and watch them to make sure that she is being taken care of, and it's heartbreaking because I have, I am just powerless over this entire thing.” West said.

According to a state inspection report dated June 5, 2020 Signature HealthCARE of Jacksonville was cited for having several deficiencies including failure to ensure that medications were labeled in accordance with professional principles; stored under proper temperatures and/or not expired in two of four medication carts observed for medication storage. The report stated that placed residents at risk of receiving medication that was expired and potentially ineffective.

Inspectors also found the facility failed to ensure there was a full-time qualified social worker to meet the needs of all ninety residents at the facility.

The facility was also cited for failing to ensure medications requiring refrigeration were refrigerated placing residents at risk of receiving medication with altered properties that were potentially ineffective or dangerous the report said.

Signature HealthCARE is listed on the report as saying it does not believe and does not admit any deficiencies existed before, during or after the survey.

An inspection on July 8, 2020 found the deficiencies had been corrected.

The Agency for Healthcare Administration said it was onsite at this facility on July 29. The inspection report said no deficiencies were found.

Anyone with concerns about the care of a family member at a facility in Florida should immediately contact the Agency’s Complaint Administration Unit at 1-888-419-3456 or online Licensed Health Care Facility Complaint Form.