Health care workers gave more than 1,100 shots in the first three hours at Regency. At Gateway, 150 doses were administered in the first 45 minutes. 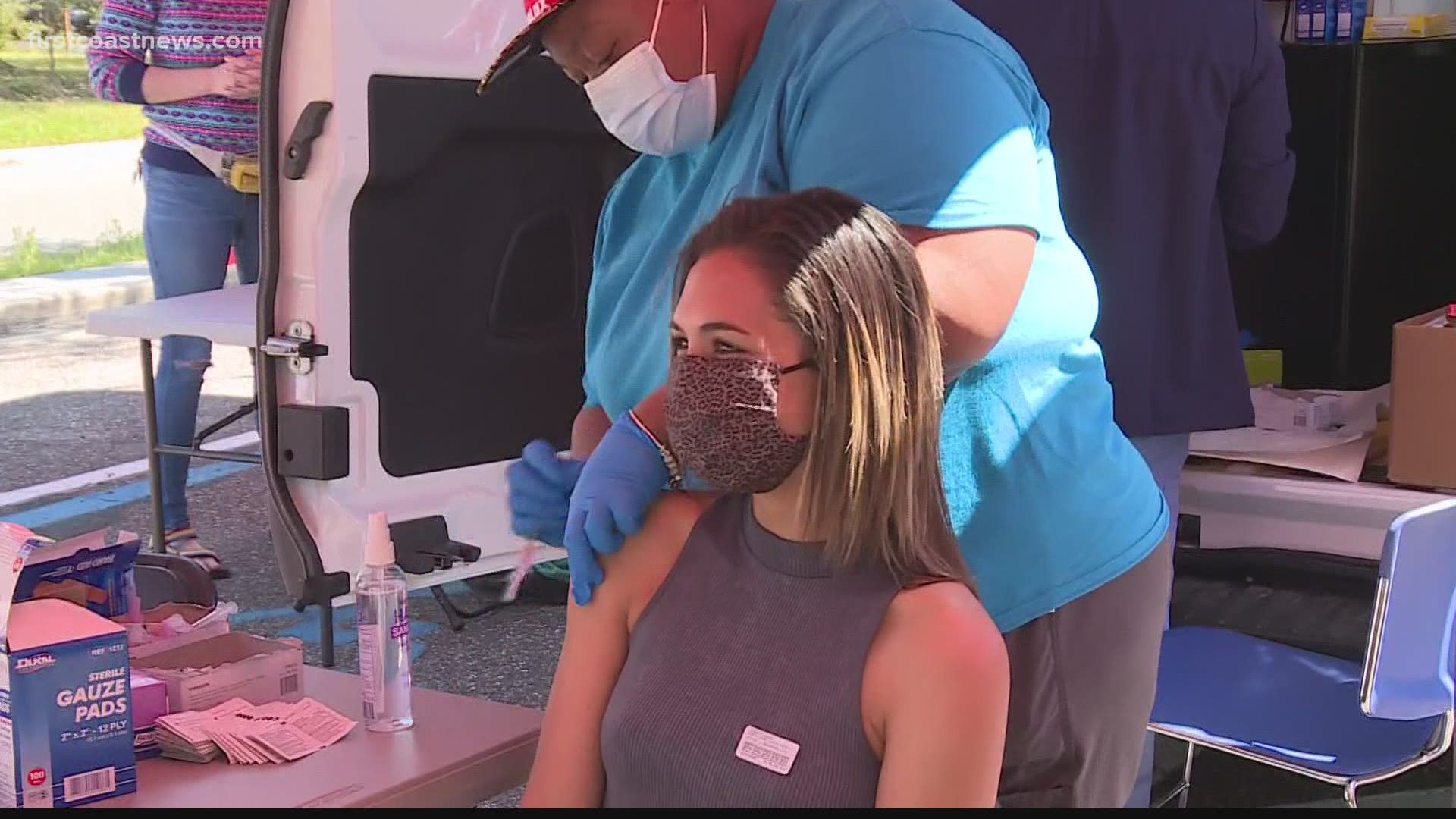 JACKSONVILLE, Fla. — Monday was the big day: Everyone 16 and older was finally eligible to get the COVID-19 vaccine in Florida.

The Gateway and Regency vaccine sites saw a steady number of people of all ages. Teens with their parents, parents themselves and older folks lined up to get their shot throughout most of the day.

Around 4:30 p.m., though, Regency didn't have a wait at all, state officials said.

🔴No line!
🔴No wait!
🔴No appointment needed today!🔴Open until 7PM!

The State of FL @FLSERT Regency Mall #COVID19 Vaccination Site in JAX, FL is vaccinating anyone who lives in Florida age 16+.

🔴Anyone age 16 or 17 must have a parent/legal guardian with them.

Health care workers gave more than 1,100 shots in the first three hours at Regency. At Gateway, 150 doses were administered in the first 45 minutes.

"Honestly, I don't like needles, but it was an easy in and out process," Leonard Thomas, who got his shot at Gateway Monday, said. "It was a 15-minute wait [for observation after] and after that, I was perfectly fine."

Sixteen and 17-year-olds were able to come to Gateway Monday to get the shot with a COVID-19 consent form and a parent or guardian present. After Monday, however, the site will no longer offer first doses of the Pfizer vaccine. Instead, the Johnson & Johnson vaccine will be administered.

Sixteen and 17-year-olds can go to Regency, Celebration Church, the Legend’s Center or Panama Pharmacy after Monday to their first dose of the Pfizer vaccine, the only vaccine teenagers are eligible to receive.

There were several pop-up Johnson & Johnson sites across Jacksonville Monday and the past week. The site at the Eastside Branch Library was one of them. By 3 p.m., staff at the pop-up administered about 250 of the 400 doses. By 6:30 p.m., 400 doses had been administered.

Still plenty of J&J at the Brown Eastside Library (1390 Harrison Street). Site manager says they’ve given 150 doses so far. Can give up to 400. Open until 7 pm, or until doses are gone. pic.twitter.com/T3exZvEAT7

“Basically as soon as I was an adult, I had to quarantine," 19-year-old Jovanna Cernatescu, who got a dose of the Johnson & Johnson shot at the pop-up, said. “My family has all basically gotten vaccinated, so I’m basically the last one since I’m the youngest. As soon as I found out it was out, I said, 'Okay. Let’s go.'"

A few streets over from the pop-up site, a team from the Florida Division of Emergency Management knocked on doors, registered people for the shot and dropped of flyers with information about the vaccine. They said they've been canvassing neighborhoods for four weeks.

Regardless of where you get your shot, make sure you bring your ID.

State employees canvassing neighborhood near pop up site. They’re knocking on doors, asking people if they’ve been vaccinated and handing out flyers with info. on how and where to get the shot. They’ve been across the city doing this for four weeks #vaxjax pic.twitter.com/RHSVARAp1m