11Alive watched the town hall as it happened live to provide the updates in real time. 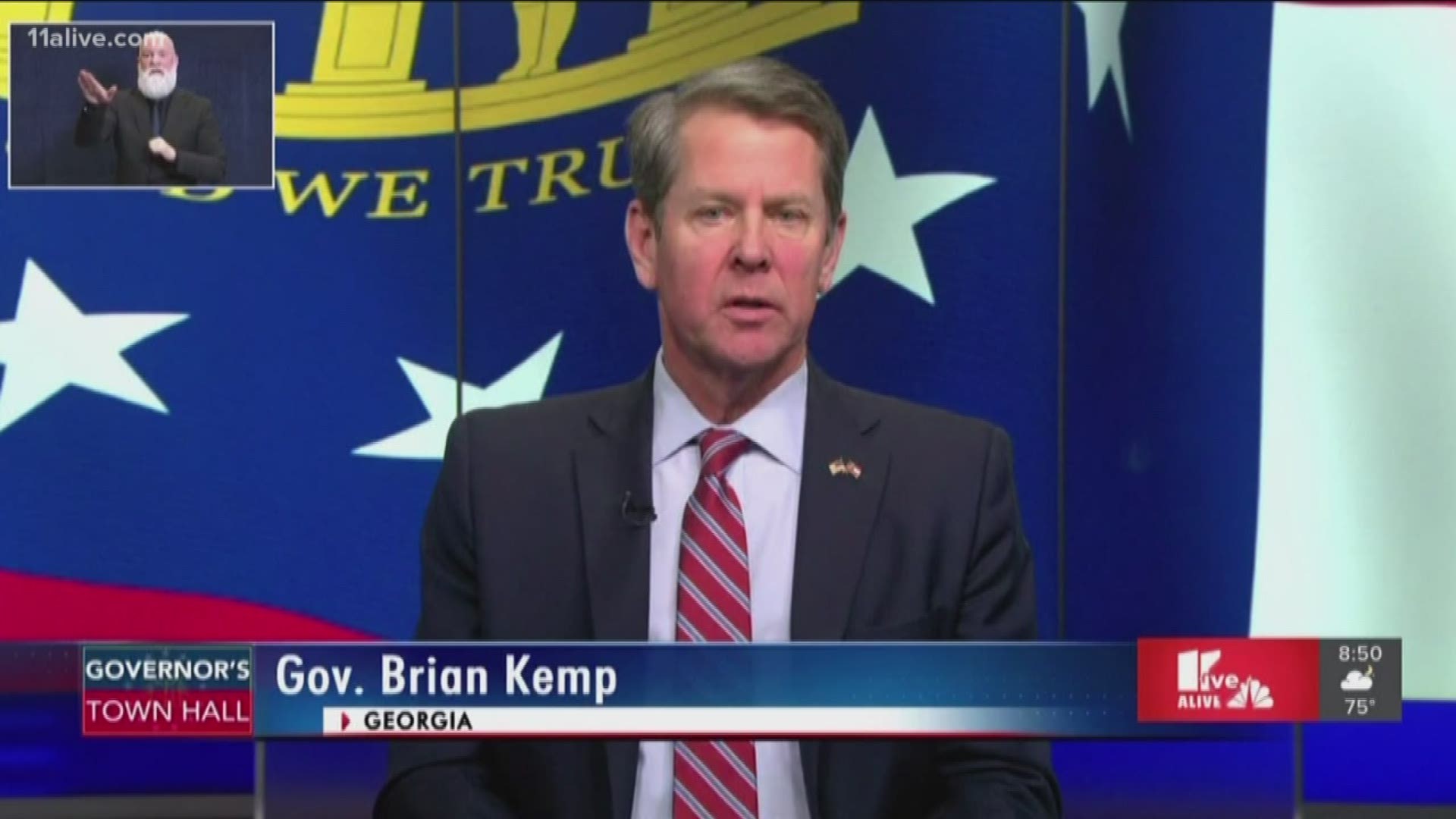 ATLANTA — Governor Brian Kemp addressed the state of Georgia about the coronavirus outbreak in a televised and streamed town hall Thursday night.

Due to restrictions on large gatherings,the town hall had to be broadcast in a unique and collaborative way. Click here to find out how the town hall was coordinated.

Below is a look at the live updates as they happened.

8:57 PM | "We know that our people are hurting right now," Kemp said. He said he and the nation's governor's have been pushing for the federal package to help lessen the impact of COVID19. He said he hopes "we can get the vote done in the U.S. Congress tomorrow."

8:55 PM | Kemp said he's empathetic to Georgians who have lost jobs because of the pandemic. He's signed some executive orders to try to help. "We will do everything we can." He also hopes the stimulus package will be passed.

8:53 PM | Kemp said he's aware of the high level of frustration when it comes to testing. He said every governor in the country has asked for more testing.

8:52 PM | Kemp said he's spoken with faith leaders about how serious the virus is.

8:50 PM | Kemp said he's even told his own mother to stay home and not go out. "By her staying home, and other elderly or medically fragile folks staying at home, it will lessen the burden on our hospitals."

8:43 PM | As it relates to Georgia schools, Kemp said he had conversations with other leaders about when students could possibly return. Thursday he announced public schools would be closed until April 24. He believes this gives them enough time for things to settle and get teachers back up to speed.

"We want parents to be comfortable," he said. The same goes for students and teachers, Kemp mentioned.

8:40 PM | Gov. Kemp said those who speak Spanish can go to the Dept. of Public Health's website for resources about COVID-19.

8:40 PM | Georgia Insurance Commissioner John King said he doesn't want people to be fearful to get screened. "The testing will be done free of charge" with the department of health if a medical provider suggests for the testing to get done.

8:33 PM | Bryson mentioned how their workflow happens during a natural disaster. He said this is completely different. "It's in the citizens hands." He is encouraging people to continue social distancing.

8:30 PM | GEMA Director Homer Bryson said they are looking for additional bed space in case the state needs it. He also said they've made progress in finding ventilators.

8:27 PM | "If it were my call, I would have a stay-at-home-order for the entire country," Bottoms said. "But obviously that is not my call." She said she also respects the governor's decision on the matter.

8:21 PM | Atlanta Mayor Keisha Lance Bottoms said they've come up with a list of objectives to pass on to the governor as it relates to those who are homeless. The objectives include, supporting screening, testing and other initiatives.

An angel donor has donated a hotel to allow homeless individuals to stay who might need to be quarantined, Bottoms said.

8:19 PM | When asked why not test more widely to make sure asymptomatic people aren't spreading the virus, Toomey said "we are limited, as every other state, by the number of tests we have." She does believe, however, the more you tests the better it will be. She said 20 percent of cases are severe and they would like to prevent that.

8:17 PM | The state is working with others to make sure that ventilators are available. They also have their first shipment coming in to help some of the harder hit areas, "like Rome and Albany," Toomey said.

8:14 PM | Social distancing seems to be helping. "The idea isn't to prevent every case, but to slow the spread," Toomey said. It's important to "flatten the curve" and keep people out of the hospitals.

8:13 PM | Dr. Kathleen Toomey of the Georgia Department of Public Health says the number of cases in the state will increase.

8:09 PM | The number of testing in Georgia is going up, according to Kemp. He said we will continue to see the number of cases rise. (As of 7 p.m., Ge

8:10 PM | Kemp asks Georgians to continue following the 15-day guideline that the president has outlined to help turn the curve for the virus.

8:04 PM | Gov. Kemp says it is up to all Georgians to do their part to help beat the virus. When asked why he has not issued a statewide shelter-in-place order, he said he has been relying heavily on the advice medical experts.

"I've gotten a lot of great advice, I'm making decisions based on that advice."

He also mentioned he had been letting local officials take the lead in their communities.

We will track the most important coronavirus elements relating to Georgia on this page.

Ways to help: Community partners and charities in need amid coronavirus pandemic

Kemp strikes a delicate balance for his COVID-19 restrictions