He said more than 1,000 people in total are currently taking calls for unemployment claims. He expects to increase that number to 2,000 soon. 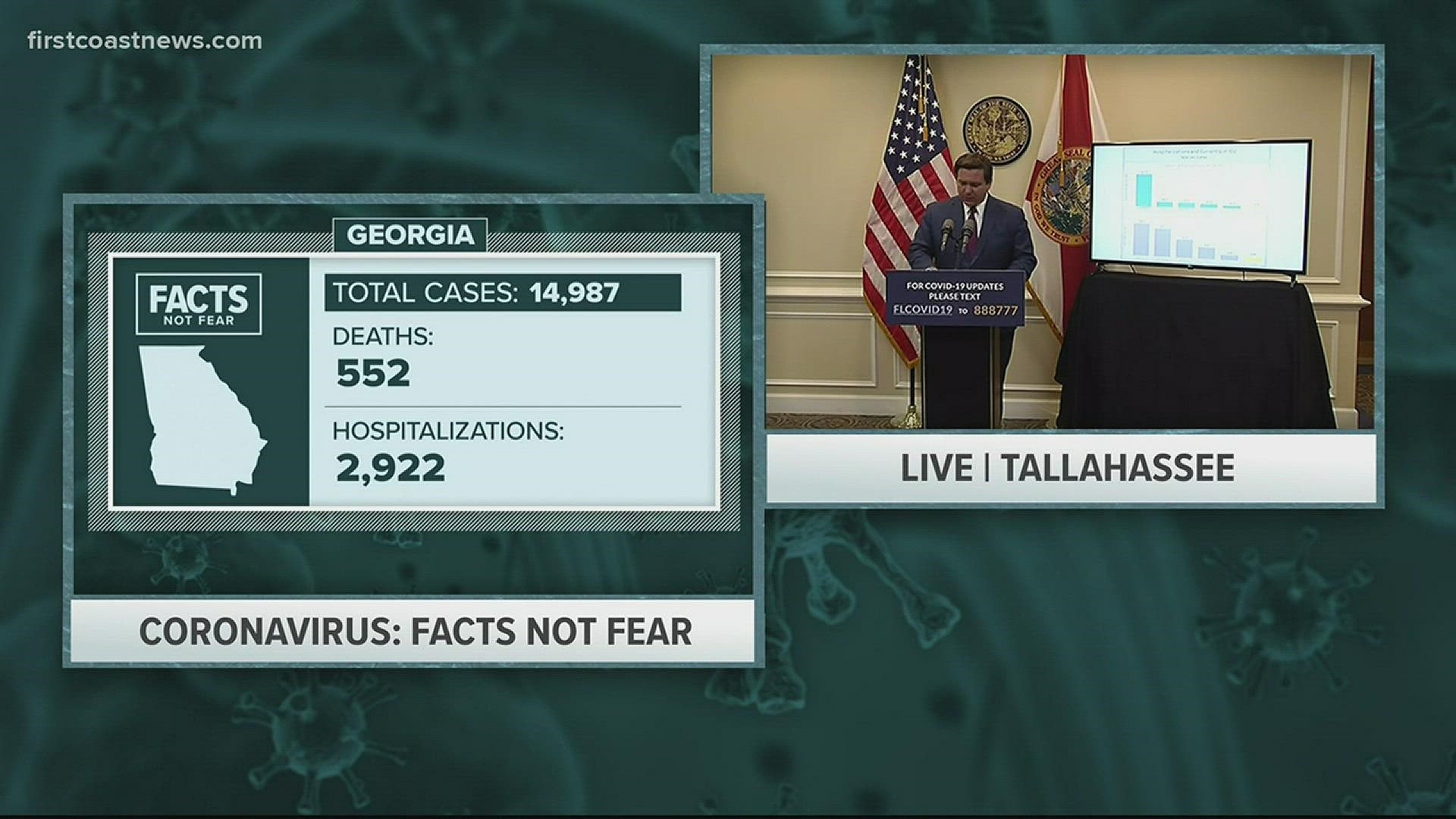 Florida Governor Ron DeSantis hosted a press conference Wednesday afternoon to update the public on their statewide efforts to combat the spread of COVID-19. He started out by showing images of case trends over the last 30 days.

He said they saw a high number of cases on April 2 and April 3, but they have seen a plateau since then, which has been a similar trend with other states.

He said they needed to "flatten the curve" of the virus in order to prevent the hospital system from being overrun.

DeSantis said they are planning for "the next phase of this" when we enter the road to recover and begin to get back to work and have a functioning society, so he is putting together a task force for the resurgence of Florida. He plans to release a list of the names of people on that task force later in the week.

He said when it gets to that point, he understands a lot of employers will want to have easy access to testing employees, so while he hopes to get instant tests or at least 24-hour tests. The priority right now is making sure first responders, doctors and hospitals have them. He said companies like Avid are working around the clock to develop those rapid tests, but the demand is high around the country.

DeSantis said Florida is receiving multi-million dollar funding for education from the federal CARES Act, which can be used anywhere from pre-k to higher education.

DeSantis said he is always mindful of the individual workers who were displaced due to this pandemic "by no fault of their own" and on top of financial struggles have dealt with the emotional toll too.

He said he was disappointed in the initial response by the state's unemployment website, but they just added over 100 new servers to receive applications online. He said more than 1,000 people in total are currently taking calls for unemployment claims. He expects to increase that number to 2,000 soon.

He announced that he has now stripped Florida Department of Economic Opportunity's Executive Director Ken Lawson of all COVID-19 responsibilities after Lawson had been overseeing the unemployment website.

DeSantis expressed frustration over not being able to obtain basic information from Lawson, such as the number of claims that had been processed on a daily basis and called the situation "unacceptable."

He appointed Secretary of the Department of Management Services Jonathan Satter to take over the role of leading the unemployment claims efforts.

DeSantis said they have set up a new Pega website for unemployment claims that is now working, from which they have received 500,000 submitted claims so far.

Under normal circumstances, DeSantis said it takes about three weeks for an unemployment check to be sent out to an individual.

"It's my judgment that that is too long under these circumstances, it’s not a time to get bogged down in bureaucracy and red tape, so John Satter is taking over the COVID-19 response."

As for their screening efforts on travelers, DeSantis said to date they have screened 20,085 people coming into the state by car or plane.

He said he hopes the airline companies can also step up and implement screening procedures for every passenger that boards a flight, especially international travelers.

RELATED: LIVE BLOG: Legislation introduced to give millions of Americans $2,000 per month

RELATED: Here's where to get tested for coronavirus across the First Coast