Florida Gov. Ron DeSantis hosted a press conference from Tallahassee Thursday evening to provide updates on the statewide effort to combat the spread of COVID-19. 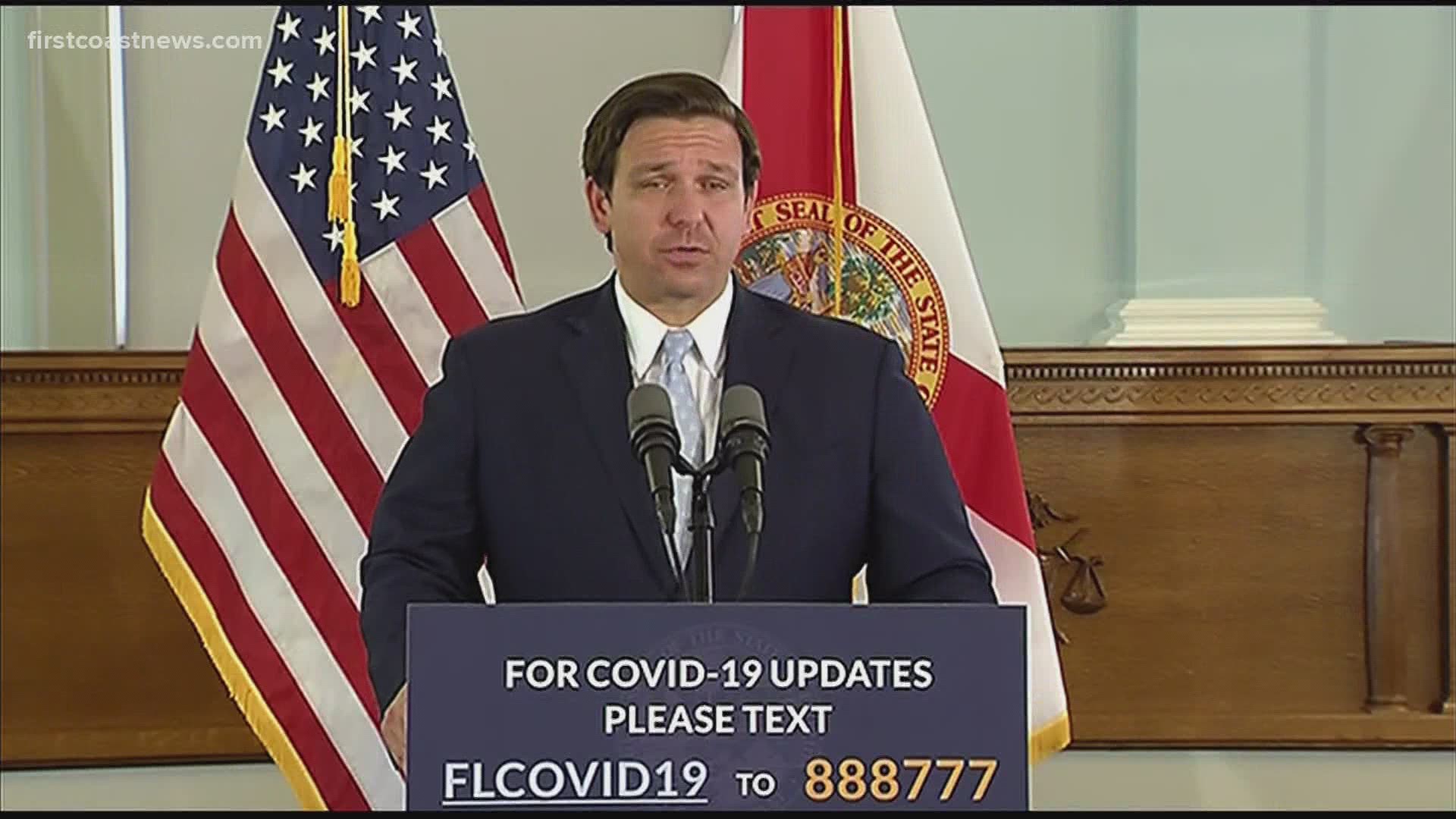 Florida Gov. Ron DeSantis hosted a press conference from Tallahassee Thursday evening to provide updates on the statewide effort to combat the spread of COVID-19 and work toward economic recovery.

He said testing has been a core of their strategy against the coronavirus. As of Thursday he said they have given nearly 220,000 tests across the state, which he said equals about 1 out of every 99 Floridians.

Most of those tests were taken at the drive-thru testings sites, but he said they are working to expand the testing to reach more people.

“Those sites can’t necessarily serve everyone. Not everyone has access to a car or may not have the ability to travel all the way to one of those drive-thru sites, so we need to be able to reach into communities, particularly under-served communities, to provide access to testing," said DeSantis. "We worked with UF Shands to develop a program for some neighborhoods in Jacksonville that were under-served.”

He said he has directed Florida Division of Emergency Management Director Jared Moskowitz to reach out to other communities across the state to see where else this need can and should be met.

On Friday, DeSantis said he will announce two new walk-up testing sites that will open for testing on Saturday. The two new sites will offer up to 200 tests a day and will be run by the Florida National Guard. Appointments can be set up by calling 954-412-7300.

On Wednesday DeSantis announced that Jonathan Satter would take over the COVID-19 state response effort at the Department of Economic Opportunity (DEO).

“While there were certain things done with the Pega website that allowed people to submit their information more quickly, ultimately we need to get people paid. So I directed Secretary Satter that has got to be the number one priority," he said.

To date, DeSantis said the DEO processed 121,102 payments to Floridians in need of re-employment assistance. He said total payouts equal nearly $50 million so far, which includes 33,623 individual Floridians who applied for re-employment benefits after the "economic upheaval in the middle of March."

This week DeSantis said the DEO mailed 23,801 checks for $600 from federal money under the CARES Act in paper checks so they could be received as quickly as possible. He said Floridians who received their $600 check will receive their state benefits for re-employment assistance either by direct deposit or prepaid debit card based on the preferences they made when they applied.

DeSantis said they have an unprecedented amount of claims to still get through.

He said one issue slowing them down was a provision in the law that requires recertification for re-employment assistance every two weeks. He signed an Executive Order Thursday to waive that provision so avoid bogging down the system. He hopes that will process claims quicker.

DeSantis said that provision was already supposed to be suspended and when he realized it had not been done yet, he issued the Executive Order.

He instructed Satter to "take whatever action you need to speed this process along so people can get their compensation" and said people are working around the clock 24/7.

Statewide DeSantis reported 43% availability of hospital beds available and just under 40% availability of ICU beds across the state. He also reported that most people he spoke with at hospitals feel like they are seeing a plateau in the numbers, so he said they are considering allowing elective surgeries to resume soon. He said it also raises a larger question of what the next phase will look like for the road to recovery.

On Friday DeSantis will hold his first meeting with his task force to discuss the recovery process and how to mitigate economic damage and get people back to work safely.

“The mandate was a singular focus and that was to get eligible Floridians paid their unemployment benefits, so the governor has given us authority to rally all state resources," said Satter. "We have thousands of state employees assisting in the effort.”

Satter said they are constantly making software upgrades to improve the technology so they can process more claims quicker.