Fauci: 'rolling reentry' of US economy possible in May

Dr. Anthony Fauci also says he 'can't guarantee' that it will be safe for Americans to vote in person on Election Day, Nov. 3. 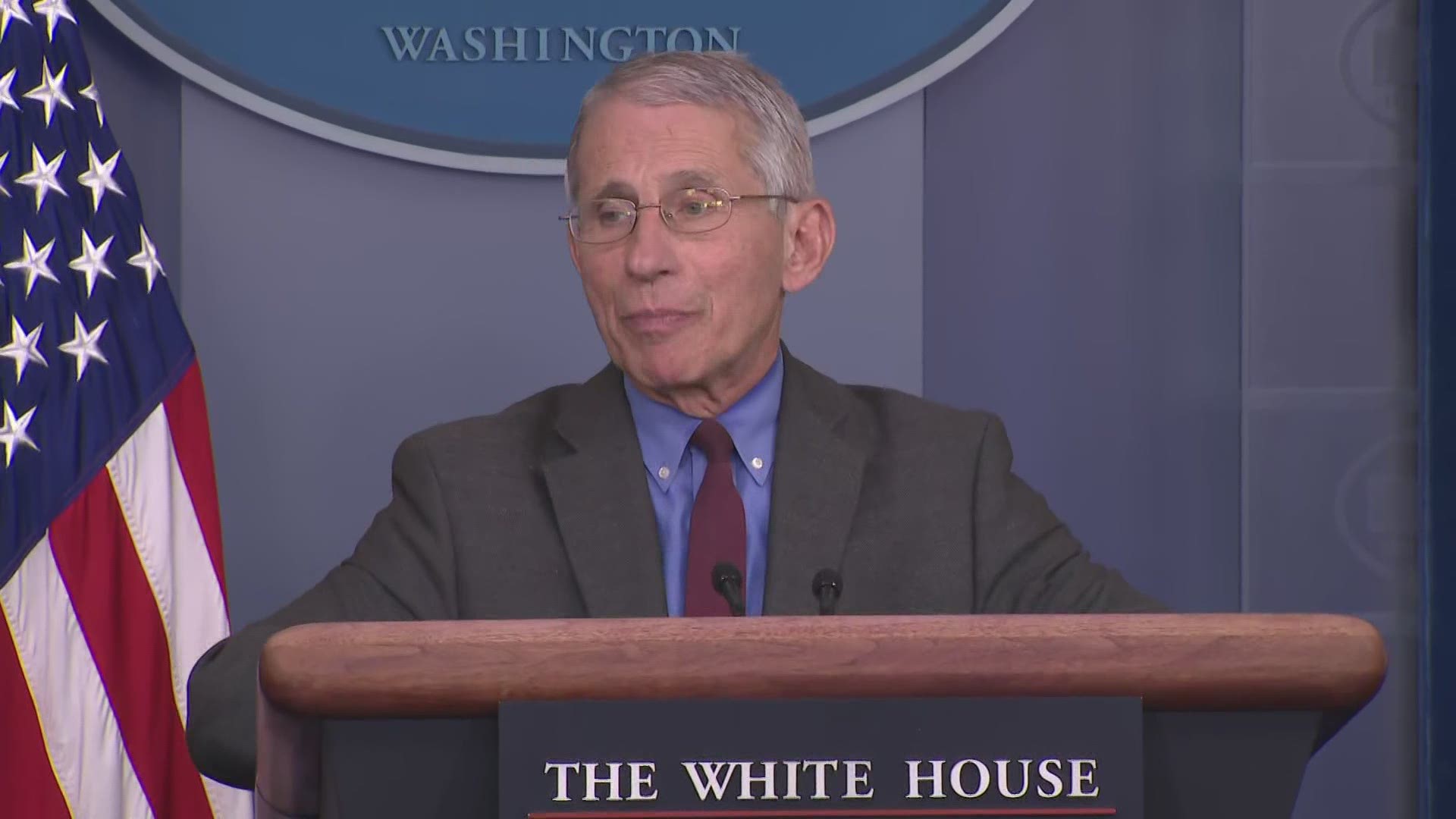 WASHINGTON — The United States' top infectious disease expert said Sunday that the economy in parts of the country could have a "rolling reentry" as early as next month, provided health authorities can quickly identify and isolate people who will inevitably be infected with the coronavirus.

Dr. Anthony Fauci also said he "can't guarantee" that it will be safe for Americans to vote in person on Election Day, Nov. 3.

Rather than flipping a switch to reopen the entire country, Fauci said a gradual process will be required based on the status of the pandemic in various parts of the U.S. and the availability of rapid, widespread testing. Once the number of people who are seriously ill sharply declines, officials can begin to "think about a gradual reentry of some sort of normality, some rolling reentry," Fauci said.

In some places, he said, that might occur as soon as May. "We are hoping that, at the end of the month, we could look around and say, OK, is there any element here that we can safely and cautiously start pulling back on? If so, do it. If not, then just continue to hunker down," Fauci said.

Whenever restrictions ease, Fauci said, "we know that there will be people who will be getting infected. I mean, that is just reality. "

Trump is eager to restart the economy, which has stalled because most Americans are under orders to "stay at home" to help slow the virus' spread.

But governors will have a lot to say about when to ease restrictions in their states, and the leaders of Maryland and New Jersey indicated Sunday that they are not likely to do so until widespread testing is available.

"The question is how fast we can get enough tests up to speed in order to help us get to the point where we are able to do all of those things," Gov. Larry Hogan, R-Md., said. He said he has set no "artificial deadline."

Gov. Phil Murphy, D-N.J., said the risks of reopening too soon are dangerously high. "And I fear, if we open up too early, and we have not sufficiently made that health recovery and cracked the back of this virus, that we could be pouring gasoline on the fire, even inadvertently," Murphy told.

Increased testing would allow authorities to identify, isolate and trace the contacts of people who are newly infected, Fauci said.

Other scientists have echoed Fauci's call for a gradual reopening, where restrictions can be ramped up or down.

RELATED: Find out when you should receive your federal stimulus check

Trump continues to deny continuing problems with the coronavirus testing that's available, including shortages and long wait times for people to learn results. He's also resistant to the idea of more widespread testing, saying last week that "it's unnecessary" and that "vast areas of our country don't need this."

Speaking about the prospects of Americans physically going to polling places in November, Fauci said he hopes voting in person can take place.

"I believe that if we have a good, measured way of rolling into this, steps towards normality, that we hope, by the time we get to November, that we will be able to do it in a way which is the standard way," he said..

"However — and I don't want to be the pessimistic person — there is always the possibility, as we get into next fall, and the beginning of early winter, that we could see a rebound," he said.

The U.S. has the most confirmed cases and deaths of any nation, more than 530,000 and 20,600, respectively, according to Johns Hopkins University. In hard-hit New York, the number of deaths has topped 700 for five straight days, but the increase in people who are hospitalized is slowing, in a hopeful sign.

For most people, the new coronavirus causes mild or moderate symptoms, such as fever and cough that clear up in two to three weeks. For some, especially older adults and people with existing health problems, it can cause more severe illness, including pneumonia, and death.

Fauci was on CNN's "State of the Union.'' Hogan appeared on ABC's "This Week'' and Murphy was on CNN and CBS' "Face the Nation."