Emory disease expert weighs in on masks for all, says COVID-19 growth rate is like 'tsunami'

Dr. Carlos del Rio related the growth of COVID-19 cases in March across the country to a tsunami and said nobody could have been prepared for its rapid spread 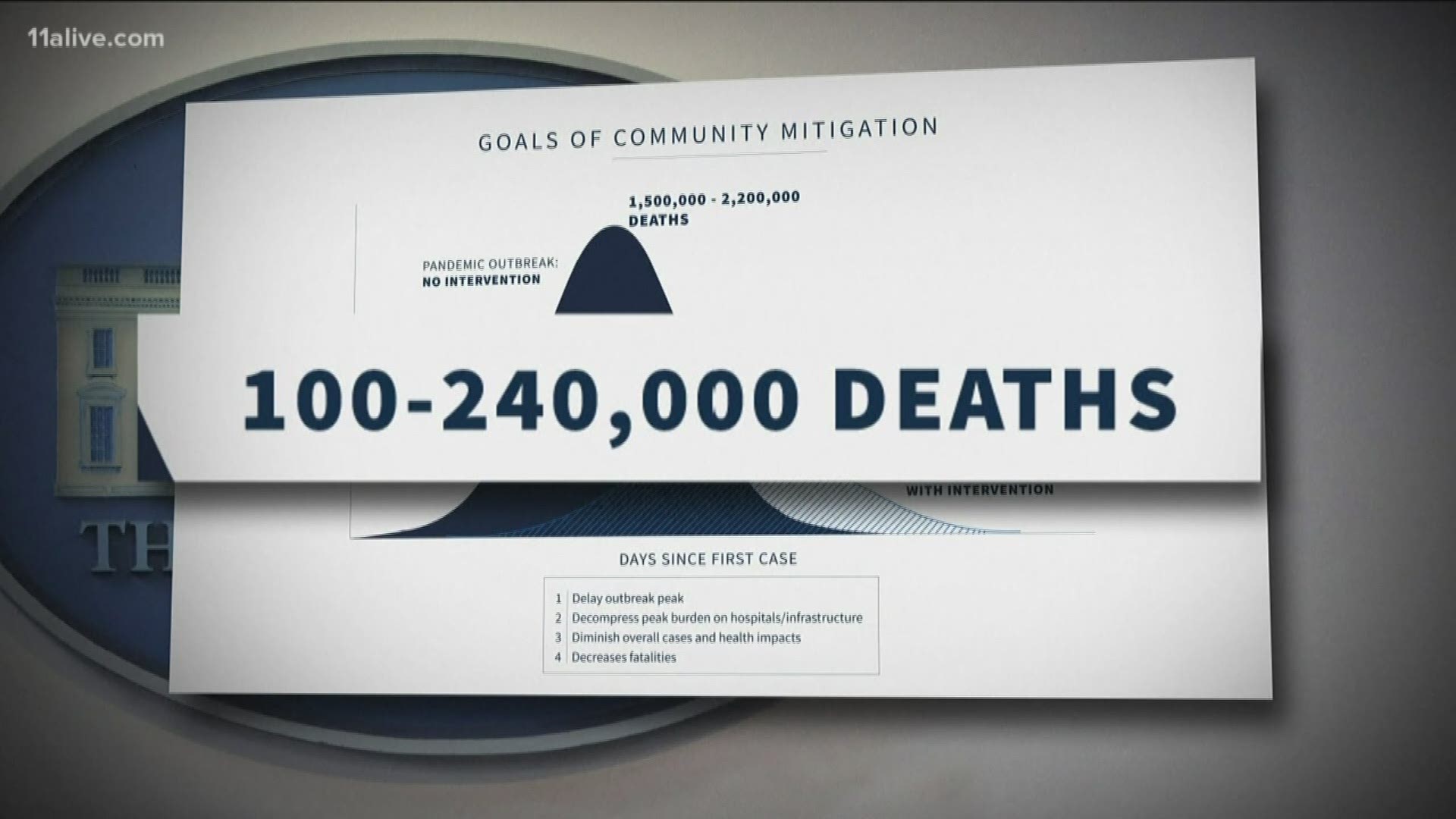 ATLANTA — The White House and President Donald Trump made sobering comments Tuesday when forecasting the spread of COVID-19 nationwide in April and beyond.

"I want every American to be prepared for the tough days ahead," Trump said Tuesday during the White House's coronavirus task force briefing. "This is going to be a very, very painful two weeks."

During the briefing, the White House's coronavirus response team unveiled projections of the virus killing 100,000 to 240,000 in the U.S. by mid-June. This prediction took into account strict measures being in place across the country over the next 30 days.

"I couldn't agree with him more," Dr. del Rio said. "We have to brace for a very challenging two weeks to 30 days. I just pray to God that we are ready and that people are going to take this seriously because the reality is that we all can do something to make this a little less challenging."

He predicted students would remain at home through the summer. His prediction later proved right, when, hours later, Gov. Brian Kemp announced he would be signing two executive orders - one to cancel in-person classed through the end of the school year, the other, a statewide shelter-in-place order.

"I'm hopeful they will be back in school in July or August, or whenever the next academic year starts," del Rio said.

PREPARING FOR THE WORST

On Monday, del Rio said a model funded by the Bill and Melinda Gates Foundation predicted the peak for COVID-19 deaths in Georgia will come the week of April 22.

"You will not know if you're prepared until you get there," del Rio said on Wednesday. "Let's think about going up to (Mount) Everest. You prepare as much as you can, but only after you reach the summit do you know whether you were totally prepared or not. Preparedness is always something you can judge at the back end, not at the front end."

As many states are expecting many more cases, hospitals in New York have already reported shortages of ventilators, as they have dealt with the most cases in the country and massive increases in the number of patients being admitted.

Dr. del Rio said the majority of people with COVID-19 don't need to be admitted to a hospital and only a small percentage end up in an ICU or needing a ventilator. But because there has been a sudden surge in cases nationwide, the small percentage heading to the ICU has turned into a substantial amount of patients.

RELATED: Coronavirus in Georgia: All Fulton County residents ordered to shelter in place

He added that locally in the Atlanta metro area, to his knowledge, all of the hospitals, including Emory and Grady Memorial, currently have a sufficient number of ventilators. Del Rio added they're gearing up for the worst, though, by bringing in more supplies.

"You always want to have more, right? You're always predicting 'are we going to need some more?' So all the hospitals are also ordering additional ventilators, but at this point we are fine," he said.

Del Rio said while hospitals, as well as the federal, state, and local governments, are attempting to prepare for the worst days ahead, communities need to remember they also need to play a role.

He called practicing social distancing and reminding others a 'social responsibility.'

"The other day I was at the entrance to the grocery store and somebody was too close to somebody else and I said, 'Excuse me, you need to be six feet apart,' and they said 'Thanks for reminding me,'" del Rio said. "We need to protect each other's health and I think in a very civil way to be able to practice social distancing."

WHEN WILL WE RETURN TO NORMAL LIFE?

When life could return closer to normal, del Rio said, is a tricky question. By the end of April, he said he believes the question should be easier to answer and added it would most likely not be a 'flick of a switch' approach. Individual communities will have to make decisions on how to proceed based on the number of cases they have locally at the time.

During his Wednesday briefing del Rio was also asked if there will be a second wave of the virus in the future. The infectious disease expert said he doesn't like to make too many predictions about such an event as there is no proof a second wave will come. He stressed it is more important to address the current situation, but did state if another wave comes he believes Georgia and the country will be better prepared to respond.

SHOULD WE ALL BE WEARING MASKS?

NBC News reports while the science behind the benefits of everyone wearing masks to prevent the spread of COVID-19 hasn't changed, the CDC and other health officials are currently considering changing public guidance on the use of masks.

"Given the fact that there is a degree of transmission from asymptomatic individuals who may not know that they’re infected, we need to at least examine the possibility, as long as we’re absolutely certain we don’t take the masks away from who are health care providers who need them," Fauci said in an interview with NBC News' Savannah Guthrie on Tuesday night.

Early on in the spread of the virus, the CDC only advocated for people with coronavirus symptoms, individuals that are considered high-risk, or health care officials on the front lines to wear masks.

He put his comment in the context though, by recognizing the list of reports about a nationwide mask shortage.

"What we don't want is the public to buy all the masks and then not have enough masks in the hospitals, which is where we need them. We have to prioritize having masks for our healthcare workers. I want to be sure that anyone that is sick in the community has a mask," del Rio said. "We want them to wear a mask even at home so they don't infect their family members."

In a scenario where there are enough masks, del Rio said he would want everyone to wear a mask while adding for the masses that could include even a cloth mask.

"All these masks that people are sewing I think could be used in the community. So my advice is sure I don't have anything against (everyone wearing masks)," he said. "Do I know it is going to work? I honestly don't know. But let's do it just because it is one more thing we could potentially do against this."

Del Rio added that in some cases, wearing a mask could give people a false sense of security.

"Most of the transmission, and we know this from multiple studies, occurs via droplets, respiratory droplets from an infected individual or from touching objects," he said. "An infected person touches a doorknob. The virus can remain there for several hours and then I come along and touch the doorknob and then I touch my face and take that virus to my face. Those two are the ones that are causing maybe 90, 95 percent of the transmissions."

"One of the concerns I have when you think about masks, you're bringing your hands to your face to make sure that the mask is in the right position and you're moving the mask around," del Rio said. "I would emphasize if you're putting on a mask, please don't touch your face."

Fulton County issues shelter in place order; violators could get $1,000 fine or up to year in jail

These states have issued stay-at-home orders. What does that mean?

Census Day arrives with US almost paralyzed by coronavirus

Wimbledon canceled for 1st time since WWII because of virus 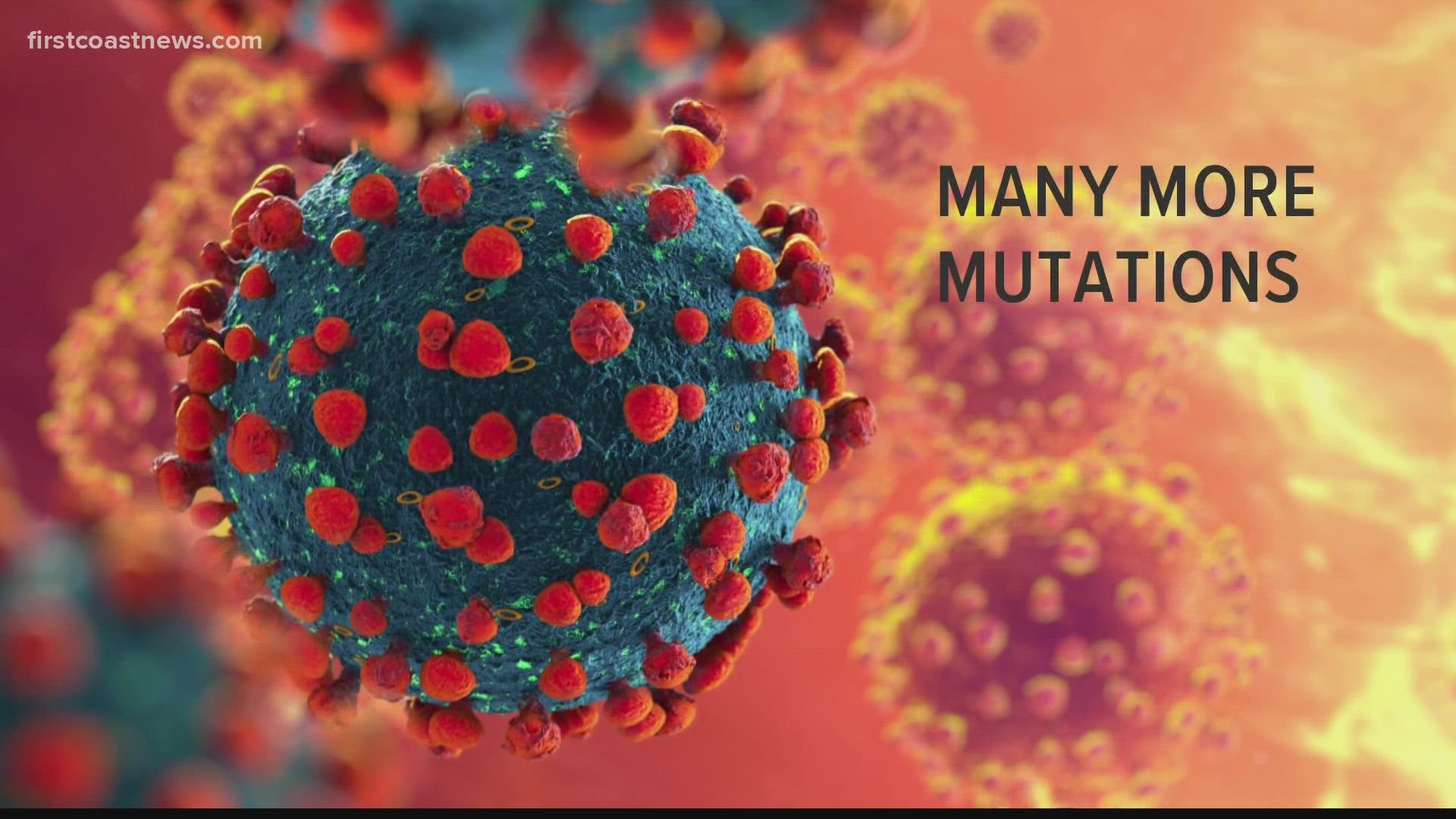