It wasn't easy, but the city's Ethics Director kept pushing until the order became a reality for the entire state amid the coronavirus crisis. 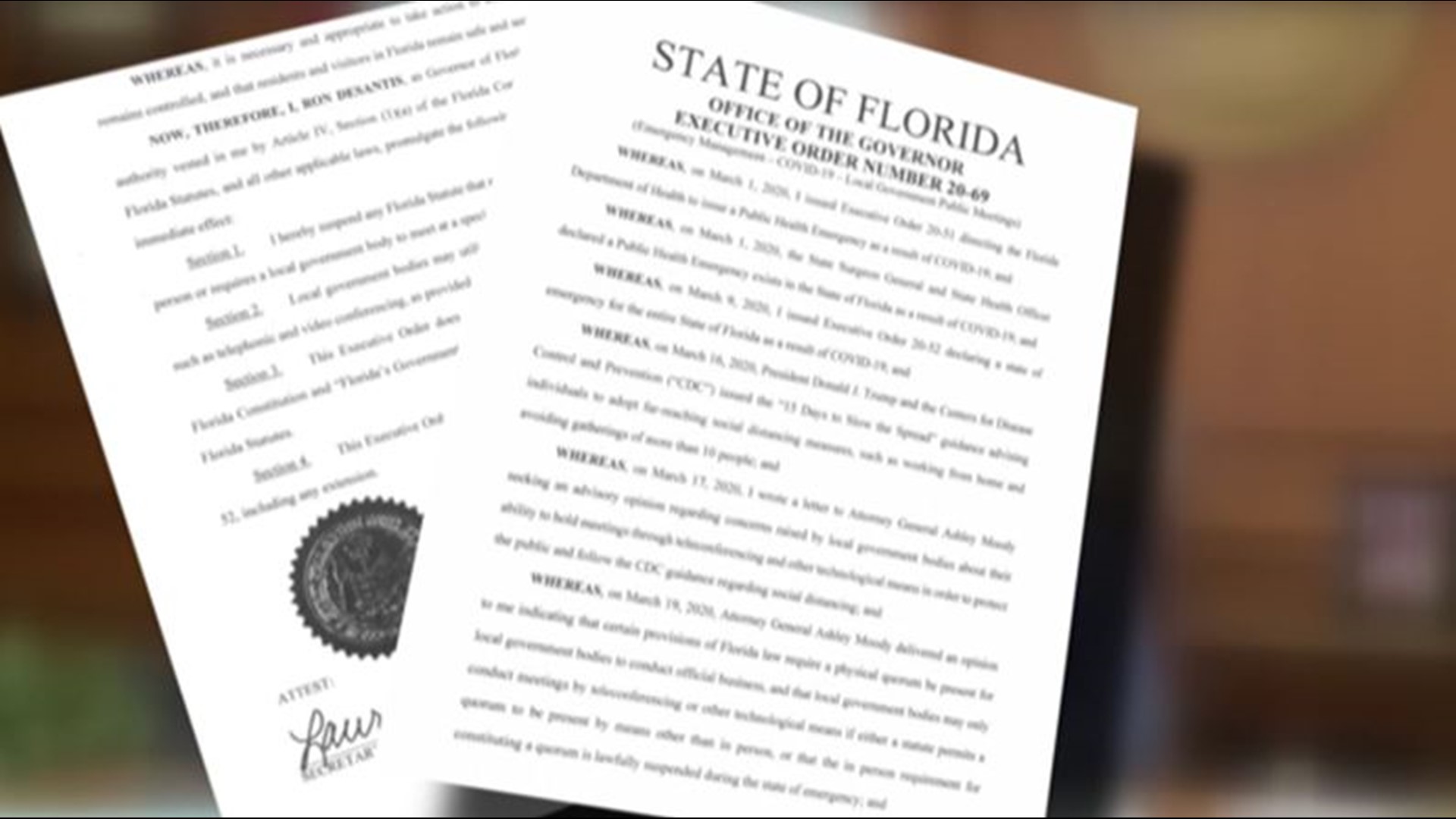 JACKSONVILLE, Fla. — On March 20, an Executive Order went into effect across Florida temporarily changing how elected officials can conduct government business amid the coronavirus pandemic.

Typically, Florida Sunshine Law requires elected officials to meet in person. The Sunshine Law established the public’s right of access to an open government, both at the state and local level.

However, with the social distancing standards in place to stop the spread of the coronavirus, officials were unable to meet as usual. That concern only grew early on in Jacksonville when City Councilman Sam Newby tested positive for the coronavirus on March 15.

Days before Newby tested positive for the virus, Jacksonville City Ethics Director Carla Miller had already sensed something needed to be done as soon as possible in order to keep government business moving at such a critical time and -- perhaps even more critical -- maintain the public’s access to their meetings.

On March 15, Miller contacted Pat Gleason, the Special Counsel for Open Government at the Office of Attorney General Ashley Moody. Gleason oversees any issues regarding the Sunshine Law.

This is her initial email making the request for action from him:

We need help in Jax. First Covid case here; Mayor declaring state of emergency. All committees, Council meetings, etc. are shutting down. Who wants to have group events now?

At the state level, meetings can be held on the phone. That should be at the local level too in a pandemic. But it isn’t.

Can the public come to noticed meeting but be isolated in one small room with a video stream of the meeting?

Can a workshop be held by Council Members where they take no action but discuss items, if noticed to public, on streaming video?

What are our options?

The AG should issue a memo on this; we should allow phone meetings on an emergency basis. If it can’t be done without legislative action, then an announcement that if certain regulations are followed, there will not be any civil/criminal actions taken. Surely, there should be some way we can handle this and carry on local government business.

"Hi all! Local government attorneys all over Florida are currently discussing and considering the options available so I would recommend that you talk over potential options with the General Counsel’s Office so that you are all in agreement as to the best approach. With regard to the issue of quorums, the latest AGO we have is the Informal Opinion to Stebbins, December 1, 2015. I hope this is helpful. If you need additional information, please let me know. Pat"

Miller pressed on, insisting that a solution needed to come from the state level since they were finding no solutions locally. In fact, the General Counsel’s Office advised Miller to reach out to Gleason.

Gleason responded by thanking Miller for her “thoughts.”

Miller followed up with the General Counsel’s Office providing a detailed analysis of the Sunshine Law and how it needed to be changed. In her message, she mentions that Mayor Lenny Curry agreed to help her contact Governor Ron DeSantis after the weekend.

That following Monday Jacksonville City Council members held their council meeting over the phone after no solution was provided to them, despite Miller’s efforts the previous Friday. After that meeting, Miller reached out directly to Joe Jacquot, the General Counsel, or chief attorney, for Governor DeSantis.

Jacquot is no stranger to Miller. He previously served as the Chair of the Jacksonville Ethics Commission a few years before working for the governor’s office.

In a message Miller tells Jacquot that the Council Members are concerned, for understandable reasons, and are looking for direction on how to conduct their meetings going forward.

Two days later, on March 19th, the Attorney General issued an opinion in response to the governor’s letter, which essentially stated that unless the Legislature acted or the Governor issued an emergency order, the Sunshine Law could not be adapted for technology-based meetings. Miller said that bumped it back to the Governor’s office.

When First Coast News asked Miller about her persistence to make the Order a reality for Florida, she declined to take credit, but thanked Jacquot for his communication and quick actions.

“He did everything he could to bring it to the governor's attention and have it happen fast,” said Miller.

She says it’s been a success ever since because they were able to get all council members up to speed quickly, introducing them to online applications like Zoom. She said it may not perfect, but they will iron out the kinks along the way.

“It's amazing, really, to come up to speed from a technological standpoint in such a quick time,” said Miller. “Sometimes people plan for months to try to execute something like this, but within about two weeks we've been able to get everything up online. I think we're actually going to have more public participation because people can watch it from home, they can raise their hand and comment. It's actually going to be easier for people to take part.”

Miller said their first online meeting between Mayor Curry’s Office and City Council garnered more than 150 public citizens. To continue to grow that public audience, Miller wants to help citizens understand exactly how to log in and still comment at meetings so she created an easy step-by-step guide.

“My concern is that there are people who just need a little bit of help getting online and watching the meetings,” she said. “You know, some people don't have any problems, some people do, but we have to make sure it's successful for everyone, including people with disabilities.”

That’s why Miller created a simple step-by-step process to ensure everyone can still get involved and air their grievances with local government. She said making sure the public can access the meetings online will help keep them calm because they are informed and can have their specific issues heard.

“You always want citizen participation. You always want everyone to really care and come downtown for a City Council meeting. To get in their car, find a parking space and sit there for a few hours. But especially in times of a crisis, you want people to have access to government, they have to sit in and listen while the decisions are being made,” said Miller. “They really care. They may not care on day to day activities, but they care now and so now it's even more important to have streamlined access.”

Miller hopes these virtual public meetings will draw in more citizens and keep them involved even when meetings return to their normal environment at City Hall.

“To get that many people in a very short time period to Zoom in and participate and give feedback, I mean it actually is better for more transparency in the future. I think it's encouraging,” Miller said.