The protesters want the school system to reinstate face-to-face learning as an option for students. 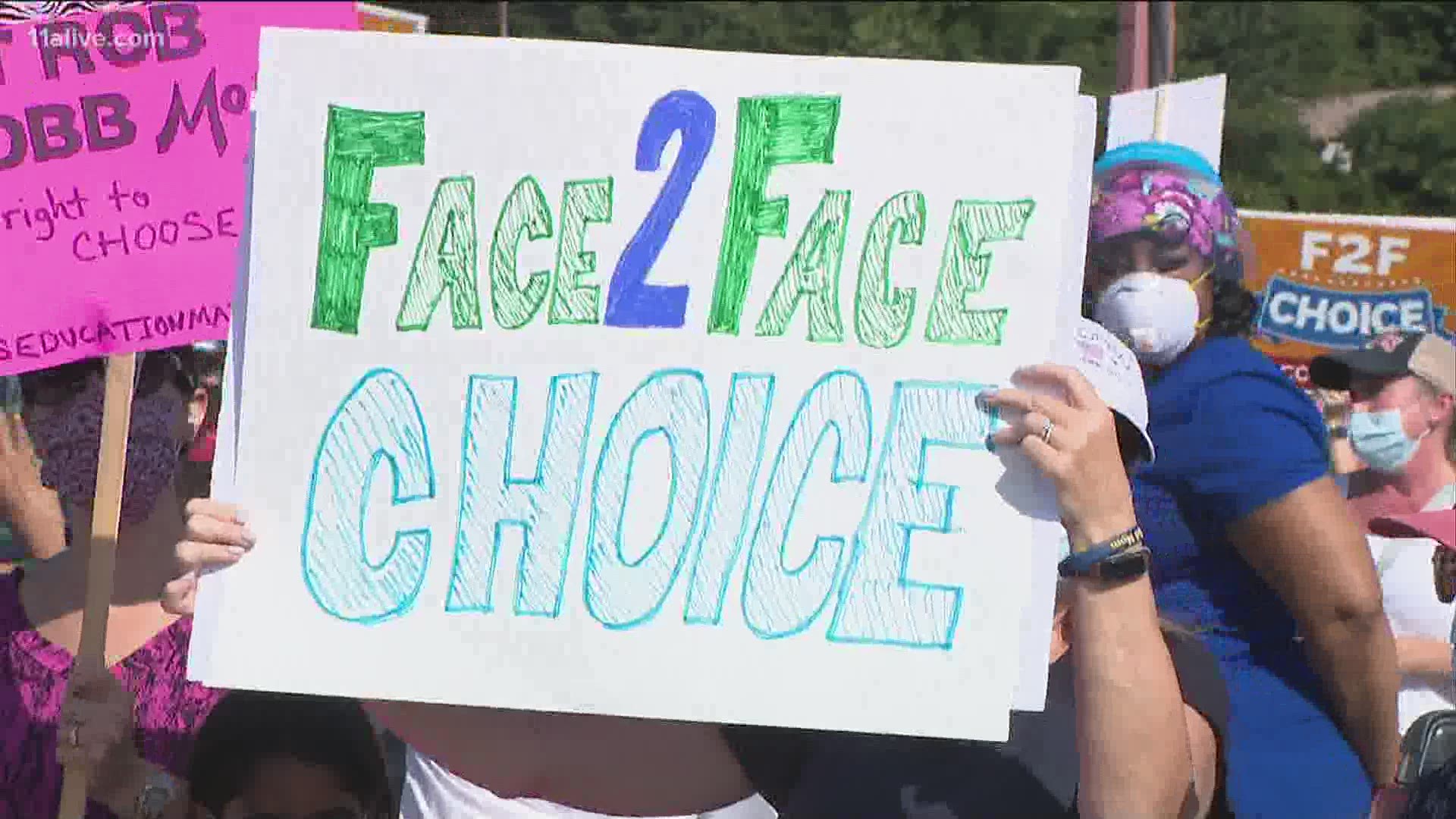 MARIETTA, Ga. — Dozens of people were outside the Cobb County Civic Center in Marietta late Saturday morning protesting the move by Cobb County Schools to open the fall session in a virtual-only format.

The demonstrators held picket signs and cheered as cars drove by honking their horns.

Cobb County Schools had initially said they would give parents the choice of whether to have their children return to school in person or through a distance-learning virtual format.

The school system later changed its stance, opting instead to have the entire school system begin its fall session in a virtual-only format due to an increase in the number of COVID-19 cases in Georgia.

A Facebook group, In-Person School Advocacy - Let Parents Choose, has appeared, gaining nearly 2,000 members since its inception. In addition, a Change.org petition has picked up more than 7.000 signatures requesting that face-to-face learning be reinstated as an option in the Cobb County Schools.

RELATED: Here are school districts' plans for back to school in the fall

"My reaction when there wasn't going to be any in-person classes was really about the removal of choice from the parents," said one of the parents in attendance on Saturday, Cindy Cooperman. "We understand the board has to make some decisions based on the safety for the school for the teachers and all that, but one of the things we are asking for is school choice to return the students and teachers to the environment with all of the safety protocols put in place as recommended by the CDC as private schools and other school districts are doing."

Many parochial schools in Cobb County and other areas around metro Atlanta are returning to school with face-to-face learning over the course of August.

Another parent, John Pumpelly, says his son had taken virtual classes previously and had problems with it. As such, he says he feels it is a detriment to students.

"We have first-hand experience with it. We know what online learning will do to a student's chances to excel," he said. "I think it's extremely damaging to children. Taking kids out of face-to-face school is much more damaging than the virus in our estimation -- that's why we formed Cobb County Parents For Choice."

He said he was very pleased to see the turnout at Saturday's rally.

"We've been at this for just two weeks," he said. "To get this sort of turnout -- to get more than 7,000 signatures on a petition; to get nearly 2,000 people on a Facebook group that agree with this cause. And the children who need to be in face-to-face school, who are most vulnerable to virtual school are not the ones out here."

The first day of school for Cobb County Schools is Monday, August 17.  11Alive reached out to Cobb County schools for a response to the parents' concerns and their petition but, so far, have not heard back.

According to the Georgia Department of Public Health, Cobb County is one of the top five counties with the most COVID-19 cases. The county has seen a jump in cases just this past week and, on Saturday, more than 200 new cases have been reported. Right now, the total number of deaths from COVID-19 stands at 298.