Live updates: Walz says decision could be made on mask mandate in 'very near future'

Here are the latest updates on COVID-19 in Minnesota and Wisconsin.

Gov. Tim Walz answered questions about a potential mask mandate on Wednesday at a news conference, saying that he thinks there will be a decision soon.

"Wearing a mask, especially indoors, reduces the spread of COVID," Walz said. He said a recent study shows that 95% mask compliance could save 1,700 lives in Minnesota by November.

"We are looking at this question closely," he said. "We are trying to figure out how to best make it work."

Walz said he thinks in the "very near future" his administration will make some determinations, and they are considering plans that would impose mandates in certain areas instead of a blanket rule across the state.

Walz applauded decisions by Minnesota courts and some communities to implement mask mandates.

"Minnesota's on a good path," he said. "I say that optimistically but not naively, and cautiously ... we have to continue to make good decisions to stay on that path."

He said that increasing numbers in Iowa, Wisconsin and across the south "start to make us pause."

About 22% of Minnesota's cases, or 8,818, are among people ages 20-29. Edina's mayor also pleaded with young people to use more caution this week, after that city saw an increase in cases among youth.

"Young people from across the state are accounting for the bulk of cases in the last two weeks," she said. "And any activities where you have people in groups where they cannot social distance means there is a greater likelihood of transmission." 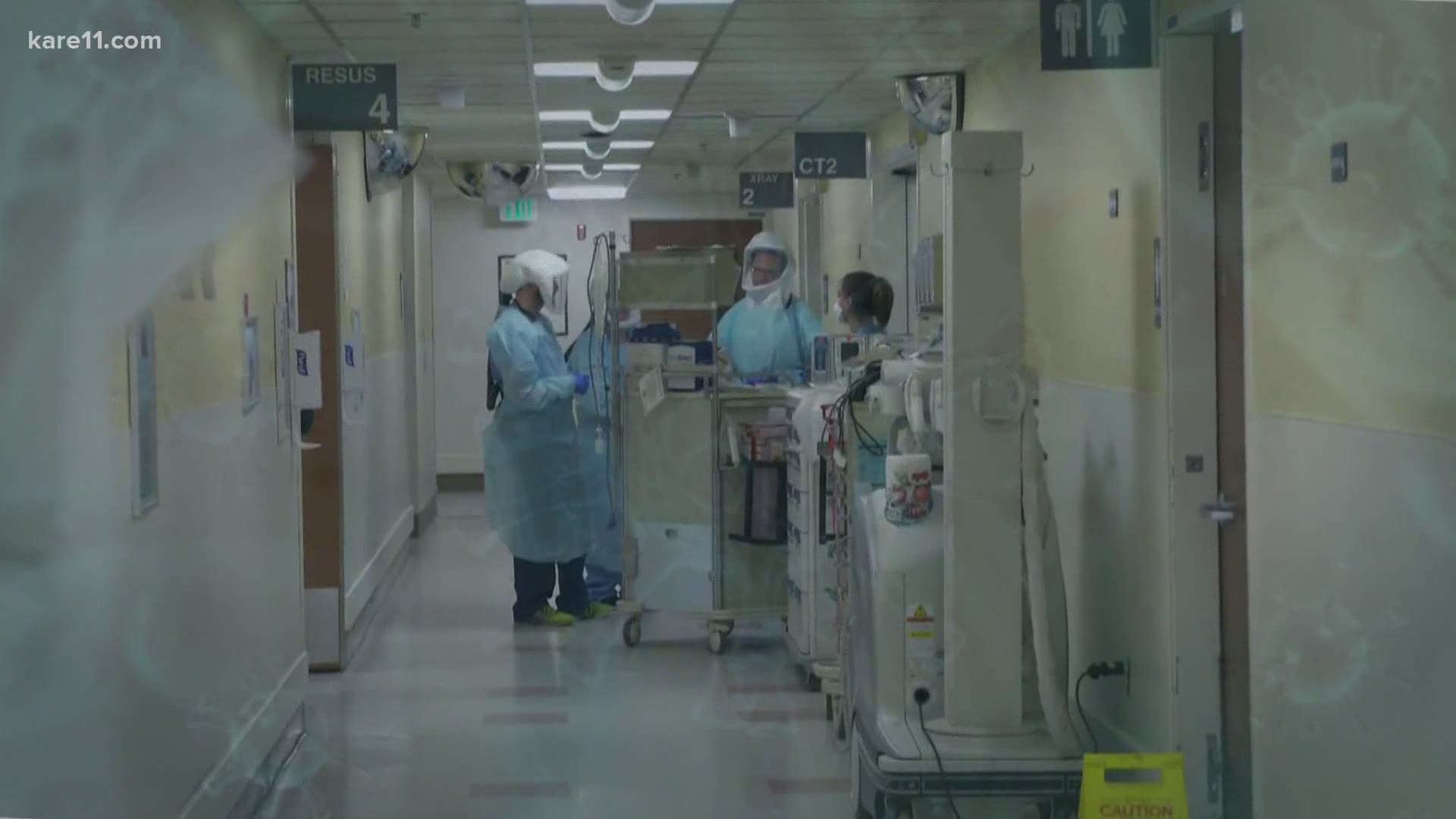 Ehresmann said among those 20-29, bars and restaurants remain a "significant source of exposure."

"We’ve had several hundreds of cases from those types of establishments in the last week, so it really is a significant exposure," she said.

Ehresmann said transmission appears to have happened in those settings, and then those people have also passed the virus onto their contacts in some cases.

MDH Commissioner Jan Malcolm said that their department, and Gov. Tim Walz, are monitoring the hospitality industry closely and learning from other states. She said they are appreciative that some hospitality industry leaders have stepped up to call for adherence to the guidelines. Malcolm said those groups are well aware that guidelines will need to be followed for establishments to remain open, even at limited capacity.

"If that’s going to be able to sustain, folks really have to comply with the executive order guidance and requirements around capacity limits, social distancing, not having people standing around in bars, seated only, strong preference for outdoors," Malcolm said.

She said the governor wants to give time and space for both proprietors and Minnesotans to understand that the way to stay open is to comply. But Malcolm said the conversation will continue.

"That’s sort of been an intentional 'let’s see how this goes' strategy over the last week and more," she said.

Ehresmann said that public health staff and local law enforcement have been performing proactive checks at some bars and restaurants, and MDH follows up with guidance and assistance when problems are spotted.

Minnesota's case positivity rate, or the percentage of tests that come back positive, is now at 4.4% - up from 3.6% a week ago. Those percentages are calculated on a seven-day average.

"It’s a notable change in a fairly short period of time and certainly an indicator that something has changed in recent weeks, and it’s not altogether surprising given what we’ve seen in other states," Malcolm said.

In general, the case positivity rates have a five-day lag time, so MDH is still watching to see what the effect will be from the Fourth of July holiday weekend. Malcolm said MDH is watching to see how the numbers and demographics change in the next two to three weeks.

Malcolm warned that some supply chain challenges are "re-emerging" with testing equipment, with some supplies being redirected to hotspot states.

People in Minnesota have recently been able to go to the doctor, get tested, and get a test result the next day.

"That may not be possible with this increased demand," Ehresmann said.

She said national labs are beginning to see wait times of four to six days, and that could go up to eight days with time for collecting the sample and contacting the person.

“Were continuing to monitor the situation nationally but we may see some impacts on Minnesota at this point," Ehresmann said.

Ehresmann also offered a warning about rumors around "COVID parties," where people gather in order to be infected with the virus, though she said there are no confirmed reports of transmission coming from such events in Minnesota.

"This is a really, really bad idea," Ehresmann said. "If you're thinking, 'Oh, let’s just do this and get it over with,' it’s really playing Russian roulette."

Ehresmann warned that in addition to being risky for the people who actually attend, there is a risk of infecting other, more vulnerable family members and strangers.

Regarding plans for the fall semester, Malcolm said it is a "shared goal" to get kids back into the classroom, but in a way that protects the students, teachers and staff.

"We're working very actively on it between the health department and the department of education," Malcolm said.

According to the county's communications manager, Dana Kazel, the newest cases range from children to late 70s, with nine of them under the age of 30.

None of the cases are connected to an outbreak in a congregate living setting, as has been the case for every other "significant increase." The county is reminding people to stay home as much as possible, wear a mask, stay 6 feet away from others in public, and practice good hygiene.

RELATED: Companies that are hiring in Minnesota amid coronavirus

The Minnesota Department of Health (MDH) reported 569 newly reported COVID-19 cases on Tuesday, the highest number in over a month.

No data was reported for July 4, which could have impacted the number of positive cases identified in the days following. However, the 569 new cases were reported from a comparatively low testing volume of 5,936 on Monday.

Two hundred sixty-seven people are currently hospitalized due to COVID-19, with 121 of them in the ICU. Hospitalization numbers have been fairly steady or declining in recent weeks, although Tuesday's numbers represent a rise over Monday's.

The number of cases among people ages 20-29 continues to increase, with 8,665 reported as of Tuesday. People in their 20s make up the age group with the most cases, followed by those in their 30s with 7,549. Minnesotans ages 80-89 have seen the most deaths of any age group, with 507 COVID-related deaths out of only 1,611 cases.

KARE 11’s coverage of the coronavirus is rooted in Facts, not Fear. Visit kare11.com/coronavirus for comprehensive coverage, find out what you need to know about the Midwest specifically, learn more about the symptoms, and see what businesses are open as the state slowly lifts restrictions. Have a question? Text it to us at 763-797-7215. And get the latest coronavirus updates sent right to your inbox every morning. Subscribe to the KARE 11 Sunrise newsletter here. Help local families in need: www.kare11.com/give11.

The state of Minnesota has set up a data portal online at mn.gov/covid19.