Here are the latest updates on COVID-19 in Minnesota and Wisconsin. 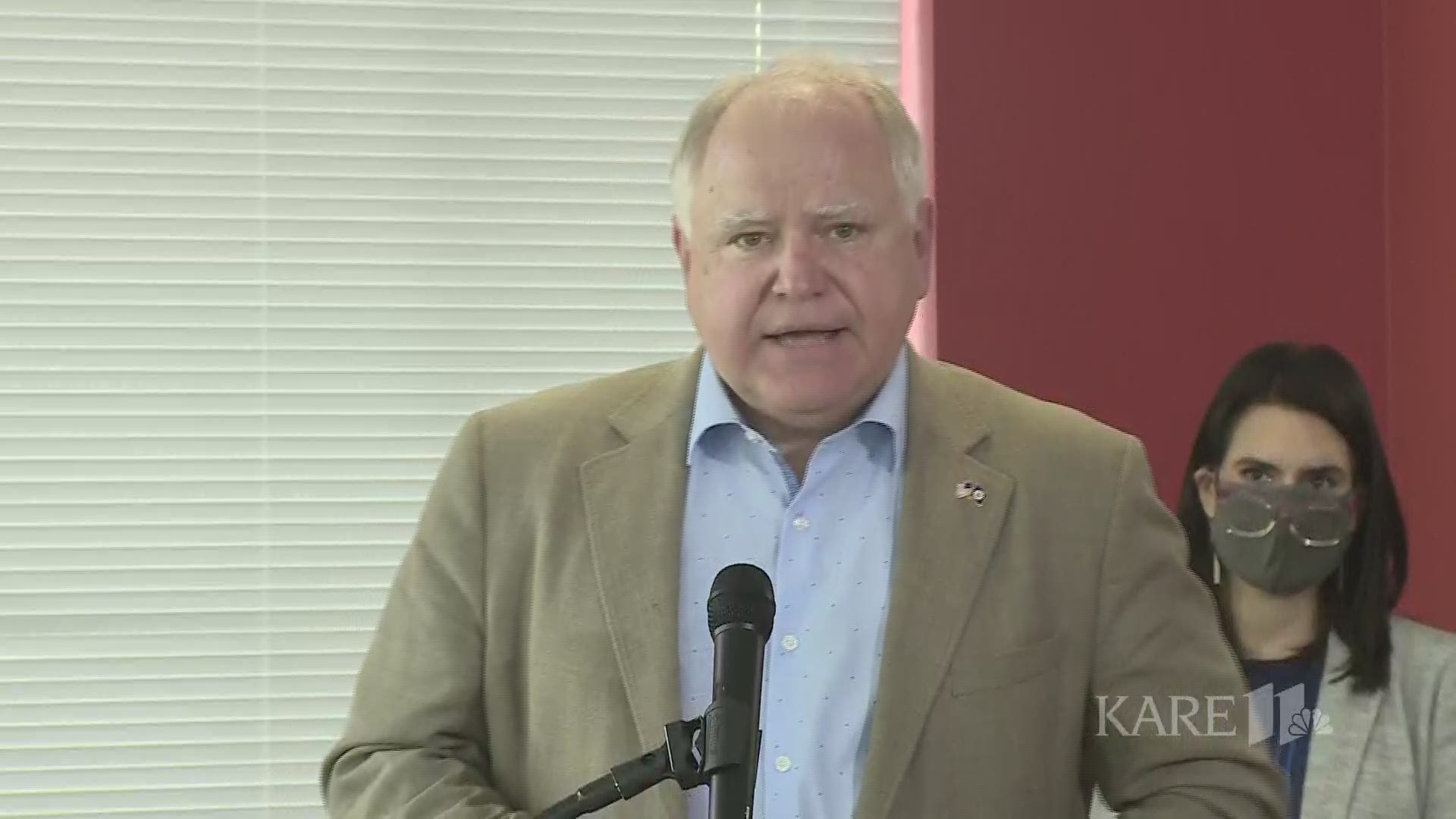 Gov. Tim Walz said he is "seriously considering" a statewide mask mandate, but a quarantine order for people coming from out of state is not currently on the table.

Responding to questions about New York implementing a required 14-day quarantine on travelers from 22 states including Minnesota, Walz said that his administration has looked at similar measures.

Walz said it's been hard to track down the source of transmission in Minnesota because so many cases are coming from bars, restaurants and other indoor facilities.

The governor said he believes other states will begin imposing mandatory quarantines, and that it will be detrimental to commerce. While he is not considering one for Minnesota, he said a statewide mask mandate is possible.

"We’ve been wearing and talking about masks since the end of March," Walz said. "This is the cheapest, easiest way and the science behind it is getting stronger every day."

Walz said that he was talking with businesses Tuesday morning about a potential mask mandate.

"We are seriously considering doing this," he said. "We are trying to get buy-in."

In response to FEMA denying the governor's request for federal aid in rebuilding after civil unrest, he said, "I'm a little disappointed but it's not that unusual."

Walz said he will probably appeal the denial.

RELATED: Live updates: Walz says decision could be made on mask mandate in 'very near future'

COVID-19 cases in critical care in Minnesota are at their lowest point since April, according to new data from state officials.

The Minnesota Department of Health (MDH) reported Tuesday that 236 people are hospitalized, with 107 of them in the ICU. Total hospitalizations dipped lower than this once in the past few months, to 227 on July 10, but otherwise haven't been this low since April 19. Intensive care cases are at their lowest since April 23.

MDH reported 403 new cases on Tuesday, the lowest tally since June 29. Early-week numbers tend to be lower since they generally rely on tests performed over the weekend. In this case, those cases came out of 8,510 tests. That's a 4.7% test positivity rate, which is consistent with what MDH reported as the seven-day average on Monday.

MDH officials commented as recently as Monday that hospitalizations may be lower because the ages of cases are trending younger, thanks largely to the lifting of restrictions on bars, restaurants and social gathering. MDH Infectious Disease Division Director Kris Ehresmann said that they expect hospitalizations to rise as those people transmit COVID-19 to higher-risk groups through second- and third-generation transmission.

RELATED: Minnesota's COVID-19 cases among youth are up 550% since May

Minnesota Department of Health (MDH) Commissioner Jan Malcolm offered a reminder Monday to bars and restaurants that although they're allowed to be open, there are specific limitations imposed by the state.

Malcolm reminded these establishments that:

"These environments that we’re all so eager to get back to do have limited capacity and do come with strong health protective measures," she said. "Turning the dial relies heavily on Minnesotans doing their part."

Malcolm said Minnesotans can file complaints about establishments not following the rules at 651-201-4500. When a violation is identified either through a complaint or during a routine inspection, Malcolm said the first step is education and making sure the establishment knows the rules. Then there is a follow-up visit the next day, and if the guidance is still not being followed, further regulatory action is possible.

"The bottom line is we need businesses to follow these guidelines, and patrons to respect that there are guidelines businesses are trying to follow," Malcolm said.

The more than 800 new COVID-19 cases reported over the weekend was the highest single-day tally since late May. However, Malcolm said that high tally in May was based off fewer tests, so the test positivity rate at that time would have been higher than the current one.

MDH Infectious Disease Division Director Kris Ehresmann said Monday that recent studies suggest that a person's infectiousness may peak in the pre-symptomatic period, so they're focusing on that timeframe when they do contact tracing.

She said this data also highlights the importance of social distancing and wearing a mask.

"People may be at their peak of infectiousness at a time where they’re not even aware that they have symptoms," she said.

The median age of COVID-19 cases continues to drop, and is currently at 37.6 years. Malcolm said the shift to younger cases has not been a surprise, since some restrictions on social gatherings and businesses lifted, but "perhaps the degree of the shift has been a surprise."

It's not necessarily the spread among younger people that MDH is concerned about, but "how it gets spread unwittingly" to people who are higher risk, Malcolm said.

"That’s what we’re frankly expecting to see in the coming weeks, is that second and third generation transmission from these more recent cases," she said.

The test positivity rate in Minnesota is currently 4.7%, and Malcolm said when it gets to 5% for more than five days in a row, they start to get concerned that it could be climbing back up.

“Our positivity rate in later April and the first half of May was double and even triple where it is now," Malcolm said. "So we just wanna put in context, we definitely have seen a deterioration … but we’re still in a much better position than we were in the late spring.”

Minnesota's hospitalization rates have remained steady or even declined in recent weeks, even as cases increase. Ehresmann said while this is likely due to the younger skew of cases, we should not expect it to continue indefinitely.

"They don’t live and work in a vacuum, and so as they develop illness we will likely see additional illness in other sectors," she said.

Malcolm said as hospitals see those increases, deferring elective procedures again and using surge capacity are both options for meeting the demand if needed.

RELATED: Canada, US poised to extend border restrictions to Aug. 21

KARE 11’s coverage of the coronavirus is rooted in Facts, not Fear. Visit kare11.com/coronavirus for comprehensive coverage, find out what you need to know about the Midwest specifically, learn more about the symptoms, and see what companies in Minnesota are hiring. Have a question? Text it to us at 763-797-7215. And get the latest coronavirus updates sent right to your inbox every morning. Subscribe to the KARE 11 Sunrise newsletter here. Help local families in need: www.kare11.com/give11.

The state of Minnesota has set up a data portal online at mn.gov/covid19.